Complete the form below to unlock access to this Audio Article: "Improving Antibiotic Effectiveness"

Virginia Tech researchers have discovered a new group of antibiotics that may provide relief to some of the more than 2 million people in the United States affected by antibiotic resistance.

In 2013, invasive MRSA infections were responsible for an estimated 9,937 deaths in the U.S. Although current infection rates are declining, the majority of these deaths, about 8,150, were associated with inpatient stays in health care facilities, according to the Active Bacterial Core surveillance report by the Centers for Disease Control and Prevention. 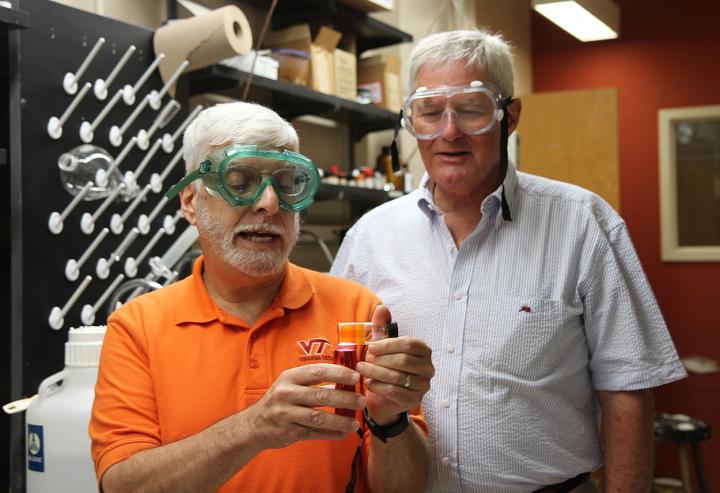 The discovery shows that the potential new antibiotics are unlike contemporary antibiotics because they contain iridium, a silvery-white transition metal. New transition metal complexes do not easily breakdown, which is important for delivery of antibiotics to where they are needed to fight infections in the body.

Even though these compounds contain iridium, further testing by the researchers shows that they are nontoxic to animals and animal cells. Thus, they are likely safe for use in humans, according to the researchers.

"So far our findings show that these compounds are safer than other compounds made from transition metals," said Joseph Merola, a professor of chemistry in the College of Science, a Fralin Life Science Institute affiliate, and a corresponding author of the study. "One of the reasons for this is that the compounds in this paper that target MRSA are very specific, meaning that a specific structure-function relationship must be met in order to kill the bacteria."

Researchers showed the antibiotics effectively kill the bacteria without inhibiting mammalian cells. A version of the antibiotic was tested for toxicity in mice with no ill effects.

"We are still at the beginning of developing and testing these antibiotics but, so far, our preliminary results show a new group of antibiotics that are effective and safe," said Joseph Falkinham, a professor of microbiology in the College of Science and an affiliate of the Virginia Tech Center for Drug Discovery. "Within the next few years, we hope to identify various characteristics of these antibiotics, such as their stability, their distribution and concentration in animal tissue, their penetration into white blood cells, and their metabolism in animals."

The team is currently testing the compounds in human cell lines and, so far, the cells have remained normal and healthy.

This discovery comes at a time when antibiotic resistance is a significant health concern all over the world, for people and for livestock.

Last September, the U.S. federal government issued an executive order to combat the rise of antibiotic-resistant bacteria, stating that it "represents a serious threat to public health and the economy." In March, a National Action Plan outlined critical next steps for key federal agencies and departments.

According to estimates cited by the Centers for Disease Control and Prevention, antibiotic resistance is a problem that adds around $20 billion annually to health care costs in the U.S.

"The biggest question scientists have to ask to tackle antibiotic resistance is, how can we stay on top of the bacteria? Fortunately, these new organometallic antibiotics are coming at a time when bacteria have not evolved to resist them," said Merola, who is also an affiliate of the Virginia Tech Center for Drug Discovery.

In both the U.S. and Europe, the spread of MRSA is a major threat to people in hospitals and other health care facilities.

When people contract the bacteria in a hospital setting, the infection can be life-threatening and cause pneumonia and infections in the bloodstream and in surgical wounds, according to the CDC.

Staphylococcus aureus is a bacterium commonly found on the skin and nose, which is how it spreads into hospitals and other medical facilities.

"Before you go into the hospital for surgery, many hospitals will do a nasal swab, and if you have staph, they will treat you before surgery because it could be transferred into your body and cause serious infection," Falkinham said.