Biomedical engineers at Duke University have demonstrated that human muscle has an innate ability to ward off the damaging effects of chronic inflammation when exercised. The discovery was made possible through the use of lab-grown, engineered human muscle, demonstrating the potential power of the first-of-its-kind platform in such research endeavors.

The results appear online on January 22 in the journal Science Advances.

"Lots of processes are taking place throughout the human body during exercise, and it is difficult to tease apart which systems and cells are doing what inside an active person," said Nenad Bursac, professor of biomedical engineering at Duke. "Our engineered muscle platform is modular, meaning we can mix and match various types of cells and tissue components if we want to. But in this case, we discovered that the muscle cells were capable of taking anti-inflammatory actions all on their own."

Inflammation is not inherently good or bad. When the body is injured, an initial low-level inflammation response clears away debris and helps tissue rebuild. Other times, the immune system overreacts and creates an inflammatory response that causes damage, like the often deadly cytokine storms brought on by some cases of COVID-19. And then, there are diseases that lead to chronic inflammation, such as rheumatoid arthritis and sarcopenia, which can cause muscle to waste away and weaken its ability to contract. 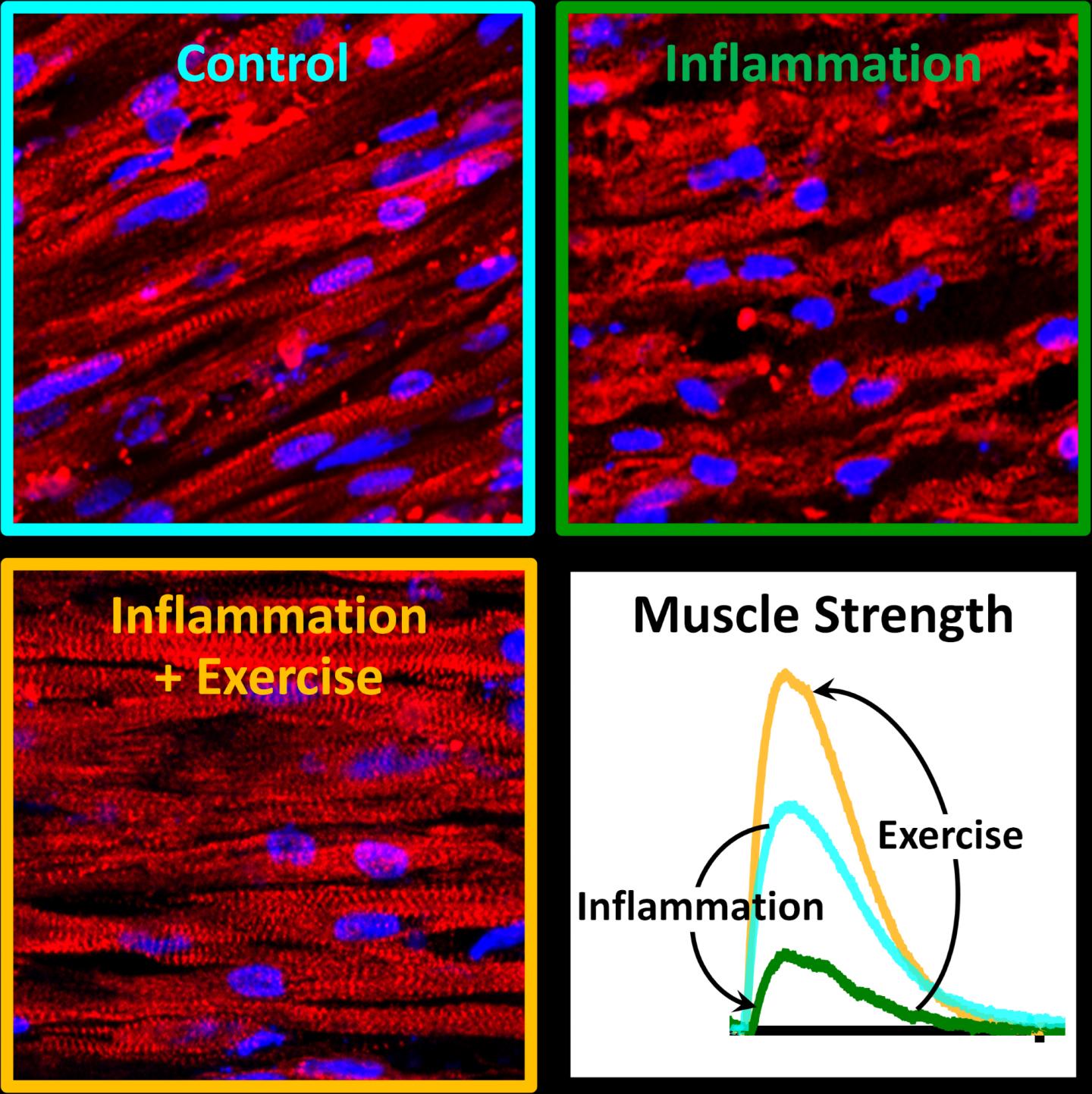 Biomedical engineers at Duke University have demonstrated that human muscle has an innate ability to ward off the damaging effects of chronic inflammation when exercised. Credit: Zhaowei Chen, Duke University

Among many molecules that can cause inflammation, one pro-inflammatory molecule in particular, interferon gamma, has been associated with various types of muscle wasting and dysfunction. While previous research in humans and animals has shown that exercise can help mitigate the effects of inflammation in general, it has been difficult to distinguish what role the muscle cells themselves might play, let alone how they interact with specific offending molecules, such as interferon gamma.

"We know that chronic inflammatory diseases induce muscle atrophy, but we wanted to see if the same thing would happen to our engineered human muscles grown in a Petri dish," said Zhaowei Chen, a postdoctoral researcher in Bursac's laboratory and first author of the paper. "Not only did we confirm that interferon gamma primarily works through a specific signaling pathway, we showed that exercising muscle cells can directly counter this pro-inflammatory signaling independent of the presence of other cell types or tissues."

To prove that muscle alone is capable of blocking interferon gamma's destructive powers, Bursac and Chen turned to an engineered muscle platform that the laboratory has been developing for nearly a decade. They were first to grow contracting, functional human skeletal muscle in a Petri dish, and since then the lab has been improving its processes by, for example, adding immune cells and reservoirs of stem cells to the recipe.

In the current study, the researchers took these fully functional, lab-grown muscles and inundated them with relatively high levels of interferon gamma for seven days to mimic the effects of a long-lasting chronic inflammation. As expected, the muscle got smaller and lost much of its strength.

The researchers then applied interferon gamma again, but this time also put the muscle through a simulated exercise regime by stimulating it with a pair of electrodes. While they expected the procedure to induce some muscle growth, as shown in their previous studies, they were surprised to discover that it almost completely prevented the effects of the chronic inflammation. They then showed that simulated exercise inhibited a specific molecular pathway in muscle cells, and that two drugs used to treat rheumatoid arthritis, tofacitinib and baricitinib, which block the same pathway, had the same anti-inflammatory effect.

"When exercising, the muscle cells themselves were directly opposing the pro-inflammatory signal induced by interferon gamma, which we did not expect to happen," said Bursac. "These results show just how valuable lab-grown human muscles might be in discovering new mechanisms of disease and potential treatments. There are notions out there that optimal levels and regimes of exercise could fight chronic inflammation while not overstressing the cells. Maybe with our engineered muscle, we can help find out if such notions are true."

END_OF_DOCUMENT_TOKEN_TO_BE_REPLACED

A new study by researchers at Brigham and Women's Hospital adds to the body of work exploring blood group and COVID-19 susceptibility and severity.

END_OF_DOCUMENT_TOKEN_TO_BE_REPLACED

Disruptions in the circadian rhythms in lung cells may explain why adults who survived premature birth are often more at risk of severe influenza infections, suggests a study in mice published in eLife.

END_OF_DOCUMENT_TOKEN_TO_BE_REPLACED

Willpower Is Key to Learning and Memory