Liposomes: A Basis for Drugs of the Future

Liposomes: A Basis for Drugs of the Future

Complete the form below and we will email you a PDF version of "Liposomes: A Basis for Drugs of the Future"

Their review discusses the major achievements in the field and points to the most promising areas for its further development.

Liposomes are microscopic spheres with walls arranged in the same way as in cell membranes. They were first synthesized in 1960s. In the1970s, scientists proposed using liposomes for the delivery of drugs, and a variety of drugs are currently used in liposome form for the treatment of many diseases, including influenza and various kinds of malignant tumors. 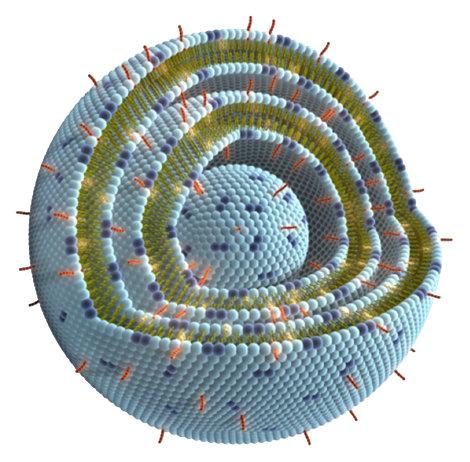 Thousands of publications have been devoted to liposomes. They are actively studied in a number of laboratories worldwide and the new article contains the most detailed list of the major achievements in this field. In it, the authors discuss:

• modern methods for synthesizing liposomes, the strong and weak points of the different technologies;

• the main types of liposomes and the different wall structures, along with the various complementary molecules used for selective interaction with cells;

• different methods of drug delivery within liposomes. These artificial microspheres can either circulate in an organism for a long while, slowly emitting a drug, or release a drug immediately after collision with certain cells.

Liposomes are able to carry out targeted delivery of substances to a necessary destination in the body. The concept of "targeted delivery" includes almost every aspect of pharmacological development, which no coincidence as, for example, during chemotherapy of cancer, only targeted delivery can decrease the severity of side effects of rather toxic drugs. Besides the targeted delivery, liposomes also have other interesting applications. For example, with their help a new drug form for diclofenac, a widely used nonsteroidal anti-inflammatory drug, is currently being developed.

The same drug can be produced in different forms. A drug designed for a small child will most likely be developed in the form of a syrup rather than a tablet, while ointments, creams, and gels are applied locally. Each of these is a different form of the same drug.

If diclofenac is placed in a liposome together with a substance that increases skin permeability, the resulting ointment with such microcapsules will be more effective in the treatment of local inflammatory reactions. Liposomes can be even be used for anesthetics such as lidocaine by the facilitation of its delivery towards nerve endings. Along with experimental drugs for cancer, liposomes can improve drugs known even to non-specialists.

Nonsteroidal anti-inflammatory drugs (NSIAD) are the basis of the majority of widely used over-the-counter remedies against pain. They include aspirin, ibuprofen, paracetamol, and the already mentioned diclofenac being marketed under the brand name of Voltaren. All of these drugs work at the expense of the suppression of biochemical reactions that lead to the development of inflammation. However, they do not remove the cause and, therefore, do not eliminate the need to visit a doctor.

Apart from the delivery of drugs, the authors of the new review briefly describe the uses of liposomes for other purposes. With their help, it is possible to deliver specific markers for both diagnostic and research tests to cells, while liposome gel (groups of microscopic beads) with special experimental molecules can be used for the chemical analysis of different substances.

In Russia and Ukraine

The main author of the new review, Vladimir Torchilin, is one of the founders of liposomal research in Russia, the 1982 laureate of the Lenin prize, author of more than four hundred scientific publications (Hirsh index over 70), and a recognized expert in the field. At the end of the 1970s, Soviet researchers began conducting practical research in the area of liposomal drug production and sometime later a selection of drugs was released in Kharkov by the Biolek company.

Currently, lipodox, an anti-tumor drug (cytostatic - a substance that suppresses cell division, oxorubicin in liposomes), lipoflavon, ophthalmic drops (an anti-inflammatory agent) are produced on a large scale, while ten other potential drugs areundergoing different tests, including biological, laboratory and clinical. The mass production of liposomal drugs is presently being organized in the Moscow Region (Technology of Drugs, Vitaly Shevts, who is responsible for the development of liposomal research together with Vladimir Torchilin).

One of the first practical applications of liposomal drugs was not in treatment but rather in disease diagnostics: diagnostic syphilis tests were created using liposomes. As Vladimir Chupin explained to the MIPT press service, these tests turned out to be more accurate than traditional ones.

Vladimir Chupin, Ph.D. in chemistry, head of the Biophysics Section at MIPT's Department of General and Applied Physics:

"I previously worked at the RAS Institute of Bioorganic Chemistry and before that I had graduated from the Lomonosov Moscow State University of Fine Chemical Technologies and had conducted postgraduate study in the Netherlands. I came to MIPT because of the good work of my colleagues and the well-equipped laboratories at the Section of Biophysics. We have received several large grants from the Ministry of Education and Science,5-100 program; graduates from both MIPT and abroad come to work with us, including from the Department of General and Applied Physics."