Complete the form below to unlock access to this Audio Article: "`Molecular Commando’ Identified to Tackle Hypoxia Pathway"

Scientists at the University of Dundee have identified a `molecular commando’ which can be stealthily deployed to activate a hypoxic response, a process which can help to fight a range of conditions including stroke, angina, colitis and brain injuries.

A Dundee team led by Professor Alessio Ciulli in the School of Life Sciences have used pioneering techniques to develop a `small molecule’ chemical probe called VH298, which offers highly targeted access to the parts of the cell which regulate hypoxia, known as the hypoxic signalling pathway.

“Using a small molecule like this offers a highly targeted option to control the hypoxic pathway, and one which can sneak in under the cell’s natural defences to perform its work, a bit like a molecular commando,” said Professor Ciulli.

The research has been published in Nature Communications. 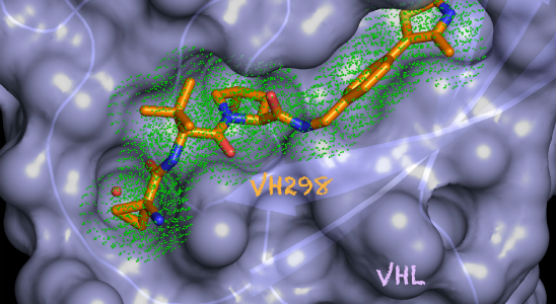 Active hypoxic signalling can be both good and bad, depending on context. In diseases like cancer it can be a bad thing as it can help tumour cells to survive and prosper. However, a hypoxic response can provide therapeutic benefits in conditions such as ischaemic injuries to the brain or heart, including stroke, and anaemia due to chronic kidney disease or chemotherapy.

Being able to control the hypoxic signalling pathway offers the prospect of finding new drugs which could be deployed in those cases. Existing methods include genetic knockouts which affect the entire pathway and chemical tools which interfere with multiple processes, and until now it had been hard to be more selective in picking a single target.

“The difficulty with some of the existing methods of tackling this pathway are that they affect stages which are also involved in other processes, meaning you are potentially triggering side effects, which makes it harder to control the overall outcomes,” said Professor Ciulli.

“We have identified a stage of the pathway that is very specific and doesn’t have this broad range of activity. By targeting it we can be much more specific in the actions we are triggering in the cell.

“This is important as a chemical probe because it means we can make better measurements of cause and effect and build more information about how hypoxia works and how we may be able to control it. It also offers a potentially drug target in itself.

“The difference in approach between for example gene knockouts and our small molecule method is a bit like between blowing up the whole factory or sneaking someone in to take out the little bit that you want to.”

The use of small molecules like this is a growing area of drug development, offering the prospect of highly specific treatments for many conditions. Successfully identifying and developing suitable small molecules, however, is extremely complex.

“We have been able to develop this project due to the world-class expertise we have at Dundee, bringing together people from different laboratories and areas of knowledge,” said Professor Ciulli. “So in my lab we work on design and studying how this types of molecules work but we are also able to call on scientists like Sonia Rocha, with expertise in oxygen sensing pathways, Doreen Cantrell, whose world-renowned work includes the role of hypoxia in immune cells, and Kevin Read in our Drug Discovery Unit, who has helped us maximise the drug-like properties of the molecule.

“It is this combination of world-class work that has helped make Dundee the top-ranked place in the UK for biological sciences research. Our new molecule will be made available to the wide scientific community for use as inhibitor in biological research.”

Story from the University of Dundee. Original piece written by Roddy Isles. Please note: The content above may have been edited to ensure it is in keeping with Technology Networks’ style and length guidelines.

Reducing the Cost of Ownership of High-Performance Liquid Chromatography Systems