Nanoparticles Can Clean Up Environmental Pollutants

Nanoparticles Can Clean Up Environmental Pollutants

Many human-made pollutants in the environment resist degradation through natural processes, and disrupt hormonal and other systems in mammals and other animals. Removing these toxic materials — which include pesticides and endocrine disruptors such as bisphenol A (BPA) — with existing methods is often expensive and time-consuming.

Researchers from MIT and the Federal University of Goiás in Brazil demonstrate a novel method for using nanoparticles and ultraviolet (UV) light to quickly isolate and extract a variety of contaminants from soil and water. 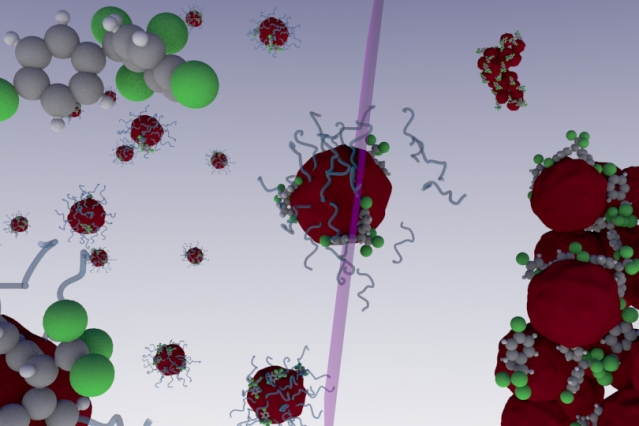 Ferdinand Brandl and Nicolas Bertrand, the two lead authors, are former postdocs in the laboratory of Robert Langer, the David H. Koch Institute Professor at MIT’s Koch Institute for Integrative Cancer Research. (Eliana Martins Lima, of the Federal University of Goiás, is the other co-author.) Both Brandl and Bertrand are trained as pharmacists, and describe their discovery as a happy accident: They initially sought to develop nanoparticles that could be used to deliver drugs to cancer cells.

Brandl had previously synthesized polymers that could be cleaved apart by exposure to UV light. But he and Bertrand came to question their suitability for drug delivery, since UV light can be damaging to tissue and cells, and doesn’t penetrate through the skin. When they learned that UV light was used to disinfect water in certain treatment plants, they began to ask a different question.

“We thought if they are already using UV light, maybe they could use our particles as well,” Brandl says. “Then we came up with the idea to use our particles to remove toxic chemicals, pollutants, or hormones from water, because we saw that the particles aggregate once you irradiate them with UV light.”

The researchers synthesized polymers from polyethylene glycol, a widely used compound found in laxatives, toothpaste, and eye drops and approved by the Food and Drug Administration as a food additive, and polylactic acid, a biodegradable plastic used in compostable cups and glassware.

Nanoparticles made from these polymers have a hydrophobic core and a hydrophilic shell. Due to molecular-scale forces, in a solution hydrophobic pollutant molecules move toward the hydrophobic nanoparticles, and adsorb onto their surface, where they effectively become “trapped.” This same phenomenon is at work when spaghetti sauce stains the surface of plastic containers, turning them red: In that case, both the plastic and the oil-based sauce are hydrophobic and interact together.

If left alone, these nanomaterials would remain suspended and dispersed evenly in water. But when exposed to UV light, the stabilizing outer shell of the particles is shed, and — now “enriched” by the pollutants — they form larger aggregates that can then be removed through filtration, sedimentation, or other methods.

The process is irreversible and the polymers are biodegradable, minimizing the risks of leaving toxic secondary products to persist in, say, a body of water. “Once they switch to this macro situation where they’re big clumps,” Bertrand says, “you won’t be able to bring them back to the nano state again.”

The fundamental breakthrough, according to the researchers, was confirming that small molecules do indeed adsorb passively onto the surface of nanoparticles.

“To the best of our knowledge, it is the first time that the interactions of small molecules with pre-formed nanoparticles can be directly measured,” they write.

Even more exciting, they say, is the wide range of potential uses, from environmental remediation to medical analysis.

The polymers are synthesized at room temperature, and don’t need to be specially prepared to target specific compounds; they are broadly applicable to all kinds of hydrophobic chemicals and molecules.

“The interactions we exploit to remove the pollutants are non-specific,” Brandl says. “We can remove hormones, BPA, and pesticides that are all present in the same sample, and we can do this in one step.”

And the nanoparticles’ high surface-area-to-volume ratio means that only a small amount is needed to remove a relatively large quantity of pollutants. The technique could thus offer potential for the cost-effective cleanup of contaminated water and soil on a wider scale.

“From the applied perspective, we showed in a system that the adsorption of small molecules on the surface of the nanoparticles can be used for extraction of any kind,” Bertrand says. “It opens the door for many other applications down the line.”

This approach could possibly be further developed, he speculates, to replace the widespread use of organic solvents for everything from decaffeinating coffee to making paint thinners. Bertrand cites DDT, banned for use as a pesticide in the U.S. since 1972 but still widely used in other parts of the world, as another example of a persistent pollutant that could potentially be remediated using these nanomaterials. “And for analytical applications where you don’t need as much volume to purify or concentrate, this might be interesting,” Bertrand says, offering the example of a cheap testing kit for urine analysis of medical patients.

The study also suggests the broader potential for adapting nanoscale drug-delivery techniques developed for use in environmental remediation.

“That we can apply some of the highly sophisticated, high-precision tools developed for the pharmaceutical industry, and now look at the use of these technologies in broader terms, is phenomenal,” says Frank Gu, an assistant professor of chemical engineering at the University of Waterloo in Canada, and an expert in nanoengineering for health care and medical applications.

“When you think about field deployment, that’s far down the road, but this paper offers a really exciting opportunity to crack a problem that is persistently present,” says Gu, who was not involved in the research. “If you take the normal conventional civil engineering or chemical engineering approach to treating it, it just won’t touch it. That’s where the most exciting part is.”