Medical devices designed to reside in the stomach have a variety of applications, including prolonged drug delivery, electronic monitoring, and weight-loss intervention. However, these devices, often created with nondegradable elastic polymers, bear an inherent risk of intestinal obstruction as a result of accidental fracture or migration. As such, they are usually designed to remain in the stomach for a limited time.

Now, researchers at MIT’s Koch Institute for Integrative Cancer Research and Massachusetts General Hospital (MGH) have created a polymer gel that overcomes this safety concern and could allow for the development of long-acting devices that reside in the stomach, including orally delivered capsules that can release drugs over a number of days, weeks, or potentially months following a single administration. 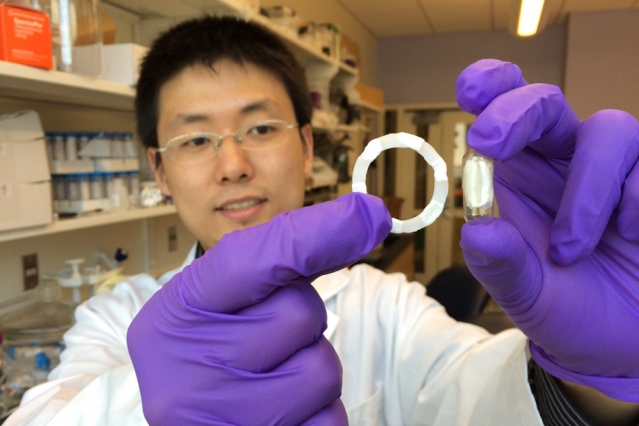 This polymer is pH-responsive: It is stable in the acidic stomach environment but dissolves in the small intestine’s near-neutral pH, allowing for safe passage through the remainder of the gastrointestinal (GI) tract. The material is also elastic, allowing for the compression and folding of devices into easily ingestible capsules — meaning this polymer can be used to create safe devices designed for extremely prolonged residence in the stomach.

“One of the issues with any device in the GI tract is that there’s the potential for an obstruction, which is a medical emergency potentially requiring surgical intervention,” says Koch Institute research affiliate Giovanni Traverso, also a gastroenterologist at MGH and an instructor at Harvard Medical School. “A material like this represents a real advance because it is both safe and stable in the stomach environment.”

Traverso and Robert Langer, the David H. Koch Institute Professor at MIT and a member of the Koch Institute, are the senior authors of a paper in the July 27 issue of Nature Materials that describes the application of this new polymer gel for creating gastric devices. Shiyi Zhang, a postdoc at the Koch Institute, is the paper’s lead author.

Designing devices for the stomach is a complicated matter of sizes and shapes. The stomach naturally empties its contents in a matter of hours, so for devices to be retained, they must be wider than the pylorus — the valve at the end of the stomach, about 1.5 to 2 centimeters in diameter, that allows gastric contents to pass into the small intestine. However, because the most convenient path to deliver these devices is through the esophagus, which is only marginally wider than the pylorus, the researchers were interested in developing a polymer with elastic properties.

“An elastic device can be folded into something small, such as a capsule, and be easily ingested through the esophagus before expanding in the stomach, restoring its original shape,” Zhang says. “When you have a device that’s larger than the pylorus, there’s a much higher probability that it will be retained longer in the stomach.”

But the size and shape of existing devices with elastic polymers have been limited by safety concerns, as there is a greater risk for fracture if a device is too large or too complex. Because of this, the researchers wanted their polymer to also be enteric — or have a mechanism that would enable it to pass through the stomach unaltered before disintegrating in the intestines.

“To lower any possible risk of obstruction, we wanted a material that could dissolve in the intestines, thereby dissociating the device, and safely pass out of the body,” Zhang says.

To create this new material, the researchers synthesized an elastic polymer and combined it in solution with a clinically utilized enteric polymer. Adding hydrochloric acid and centrifuging the solution resulted in a flexible, yet resilient, polymer gel that exhibits both elastic and enteric properties.

The researchers used the gel polycaprolactone (PCL), a nontoxic, degradable polyester, to construct several device prototypes. They first created ring-shaped devices by using the gel to link arcs of PCL in a circular mold. These elastic devices had a diameter of 3 centimeters — wider than the pylorus — before they were folded into orally ingestible capsules.

In testing the capsules in pigs, the researchers found that the rings expanded into their original shape within 15 minutes of ingestion and remained in the stomach for up to seven days. After the device passed out of the stomach, the polymer gel dissolved, allowing for the safe passage of the small PCL pieces without obstruction. The researchers also created larger devices in various shapes that could be folded and delivered through the esophagus with the assistance of an endoscope. These devices remained in the stomach for up to five days, after which the gel similarly dissolved, allowing for the remnants of the device to safely pass.

The combined enteric and elastic properties of this polymer gel could significantly improve the design and adoption of gastric-resident devices. Devices that could incorporate this material include bariatric devices for the treatment of obesity, which control how hungry or full a person feels; ingestible electronics, which can diagnose and monitor a variety of conditions in the GI tract; or extended-release drug-delivery systems that could last for weeks or months after a single administration.

“This delivery system provides a flexible and smooth external covering that slowly disintegrates, which could release drugs or small devices for monitoring and imaging the GI tract,” says Edith Mathiowitz, a professor of medical science and engineering at Brown University who was not involved with this study. “This is a very smart approach.”

In particular, the authors say they are excited for the drug-delivery applications of this technology. With further work in adjusting the polymer composition or the design of the system, they say that they could tailor devices to release drugs over a specific timeframe of up to weeks or months at a time. MIT is negotiating an exclusive license agreement with Lyndra, an early-stage biotechnology company developing novel oral drug-delivery systems, for this and other related technologies.

“I’m delighted to see these new oral systems provide an opportunity that I’ve not seen previously — enabling patients to swallow a single pill that can then act for whatever length of time is desired,” Langer says.

Such single-administration events could improve medication adherence, which remains a major clinical barrier. According to the World Health Organization, patients’ adherence to long-term therapies for chronic illnesses is only 50 percent in developed countries, with lower rates of adherence in developing nations.

Medication nonadherence costs the U.S. an estimated $100 billion every year, the bulk of which comes in the form of unnecessary hospitalizations. The researchers also say that single-administration delivery systems for the radical treatment of malaria and other infections could significantly benefit from these technologies.