Laura Lansdowne is the managing editor at Technology Networks, she holds a first-class honors degree in biology. Before her move into scientific editing, Laura worked at the Wellcome Sanger Institute and GW Pharma.
Learn about our editorial policies
Heterometrus sp. Credit: Arie van der Meijden

Researchers have discovered a non-lethal way to study scorpion venom genes by triggering the emptying of the animal’s venom glands using electrostimulation. The study was published in PLOS ONE.

Until now, to study venom, the scorpion was sacrificed so that the venom gland could be extracted from the telson (stinger) or the telson was excised and homogenized (Figure 1). The new approach relies on transcriptomics – a technique used to study an organism’s RNA transcripts or transcriptome. mRNA is collected directly from the venom and sequenced. The researchers believe that the approach could be applied more broadly to other venomous taxa.

“Thanks to this technique, we can very precisely see which genes are active at various moments during the venom production,” said the study’s first author Prof. Freek Vonk, in a recent press release. The approach developed by Vonk and colleagues is unique in that it has been directly applied to the venom instead of the venom gland tissue. There are two key caveats to the traditional method for obtaining a scorpion venom gland transcriptome. Firstly, analysis of the venom gland can only be achieved at a single time point. Secondly, in cases where the telson is homogenized, tissues unrelated to venom production are also sequenced, making the target less specific. 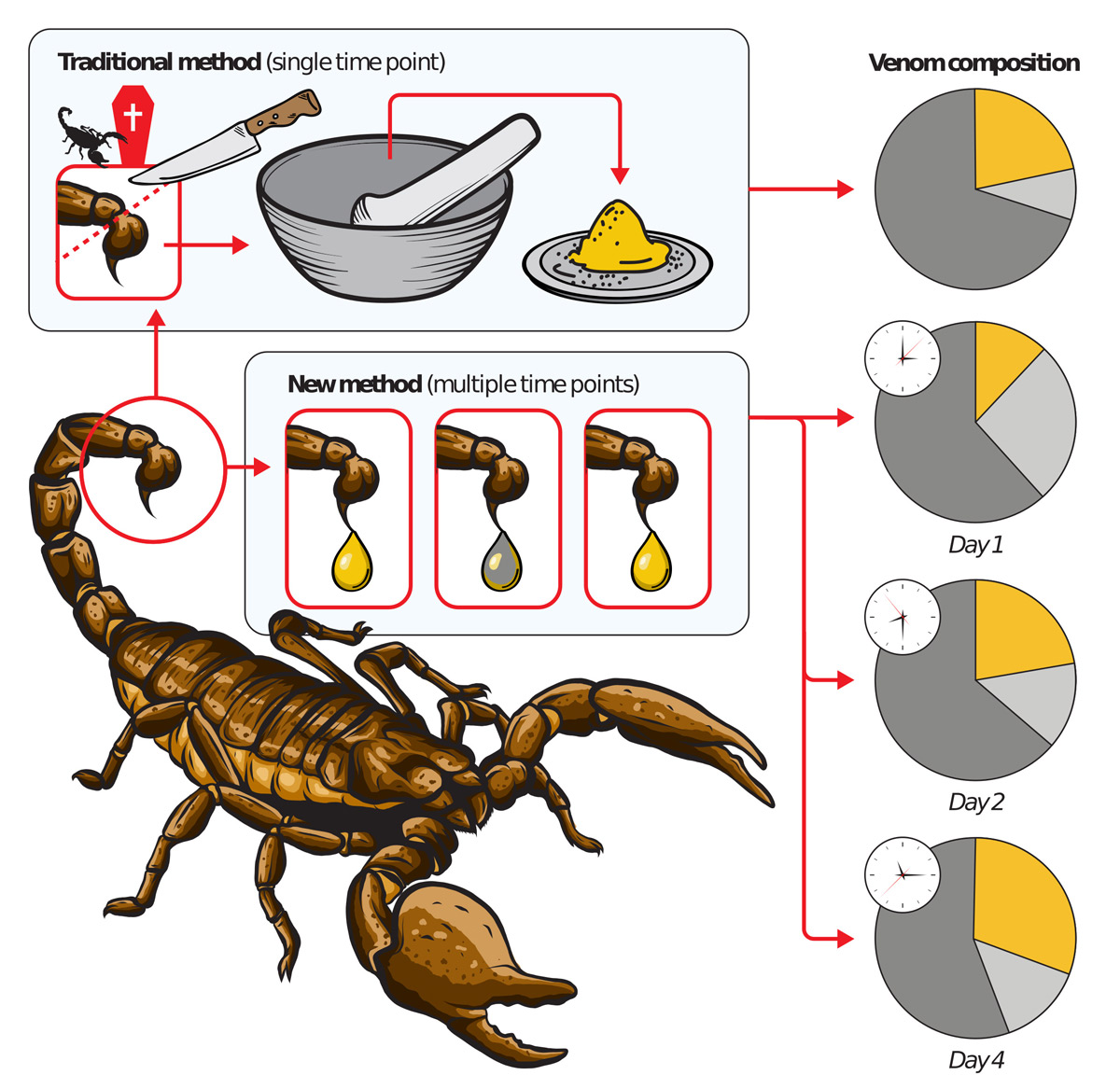 Figure 1: A comparison of techniques used to study venom. The traditional method involves removing the telson to obtain the venom, whereas in the new method venom is extracted using electrostimulation and can be repeated at various time points without sacrificing the scorpion. Credit: Vonk et al. PLOS ONE. 2021;16(11):e0258712.

According to the paper’s corresponding author, Arie van der Meijden, a postdoctoral researcher from the CIBIO-InBIO, Portugal, “It takes 8–10 days for the venom to be fully replenished,” when using the new approach. For the study, the team chose to collect the venom at two, four and five days to ensure that the gland would be in the middle of replenishing the venom. “We see that after only two days, not all venom genes are ‘turned on’ yet. It would be very interesting to narrow our study down to 24 hours…” added van de Meijden. He explained that to prevent exhausting the scorpion he would then wait a few weeks for the venom gland to become quiescent again: “But this process could be repeated many times, so eventually you could get a high-resolution image of the sequence of gene activation in the first 24 hours after gland depletion.”

Therapeutic and diagnostic applications of venom

Venoms are composed of complex mixtures of toxins that often possess specialized activities. They are considered a rich source of pharmacologically active compounds and have therefore gained increasing interest from the scientific community in recent years.

While only a few dozen of the ~2500 scorpion species described to date are considered potentially dangerous, Mátyás Bittenbinder, biologist and toxicologist affiliated with Naturalis and the VU Amsterdam, told Technology Networks that the neurotoxins in the venom of medically relevant species are the main cause of severe effects: “Depending on the species of scorpion, the symptoms of a 'dangerous' scorpion sting vary between sweating, nausea, vomiting and hypersalivation, whereas in more severe cases it may cause arrhythmias, heart failure and difficulty breathing, which in some cases may even lead to death.”

It is therefore important to have the ability to identify the composition of venom to discriminate between toxins with negative effects and to determine which may be harnessed therapeutically.

“… the toxins in the venom are an important source for finding new, potential drugs, such as drugs to treat cardiovascular diseases,” said van der Meijden.

Venom is known to be influenced by various factors including sex, feeding state, food type, perceived predator pressure, etc. Van de Meijden explains why it is important to investigate these factors in more detail: “We can now study how these factors change gene activation within a single individual and study many new factors that potentially influence venom composition. It would be great to know what factors influence for instance the production of dangerously toxic neurotoxins to understand seasonal changes in sting risk. Since scorpion venoms may also be a rich potential source for bioactive molecules, it would be very interesting to be able to optimize the production of toxins of interest.”

Below are just a few recent examples of ways scorpion-derived compounds have been exploited.

Cook Sangar et al. reported in Science Translational Medicine that they had identified a protein found in scorpion venom that can rapidly accumulate in joint cartilage. The researchers were able to link the protein to a steroid called triamcinolone acetonide. When the conjugate was administered to a rat model of rheumatoid arthritis it reversed inflammation in the joints of the animal. The study demonstrated that it’s possible to achieve targeted delivery of the drug to joints, preventing systemic adverse effects.

Patil et al. reported in Neurosurgery that a synthetic form of an amino acid compound found in scorpion venom could be used as a tumor-targeting imaging agent (named tozuleristide) by combining it with a fluorophore. The synthetic compound was based on chlorotoxin, a neurotoxin found in the venom of the Leiurus quinquestriatus scorpion – also known as the deathstalker. The team investigated the safety and pharmacokinetics of tozuleristide in a Phase I dose-escalation study including 17 adult participants with suspected glioma.

Shuttling drugs into the brain with scorpion venom

Díaz-Perlas et al. reported in Chemical Communications that a peptide derived from chlorotoxin found within the venom of the Giant Yellow Israeli scorpion has the capacity to transport drugs across the blood–brain barrier (BBB). The peptide, called MiniCTX3 was able to transport nanoparticles across endothelial cell monolayers in a human BBB cellular model.

The genes behind the scenes: new technique revolutionizes venom research. Mátyás Bittenbinder discusses the key findings from their study, published in PLOS ONE.

Besides scorpions, venoms derived from several different organisms including caterpillars, cone snails, spiders and wasps are currently being explored by research groups around the world.

Venom can be secreted in various different ways depending on the type of exocrine venom gland (Figure 2). Some organisms, including snakes and centipedes, have merocrine glands. The venom is secreted by exocytosis, without damaging the integrity of the gland cells. Apocrine secretion, on the other hand, involves the budding of the gland cell. The bud contains venom as well as other cellular components including RNA transcripts – scorpions and some spiders fall into his category. In the third type – holocrine glands – venom accumulates in the cytoplasm of the gland cells and rupturing of the cell releases its contents (including the venom) into the lumen of the gland. Cone snails and some spiders possess holocrine glands. 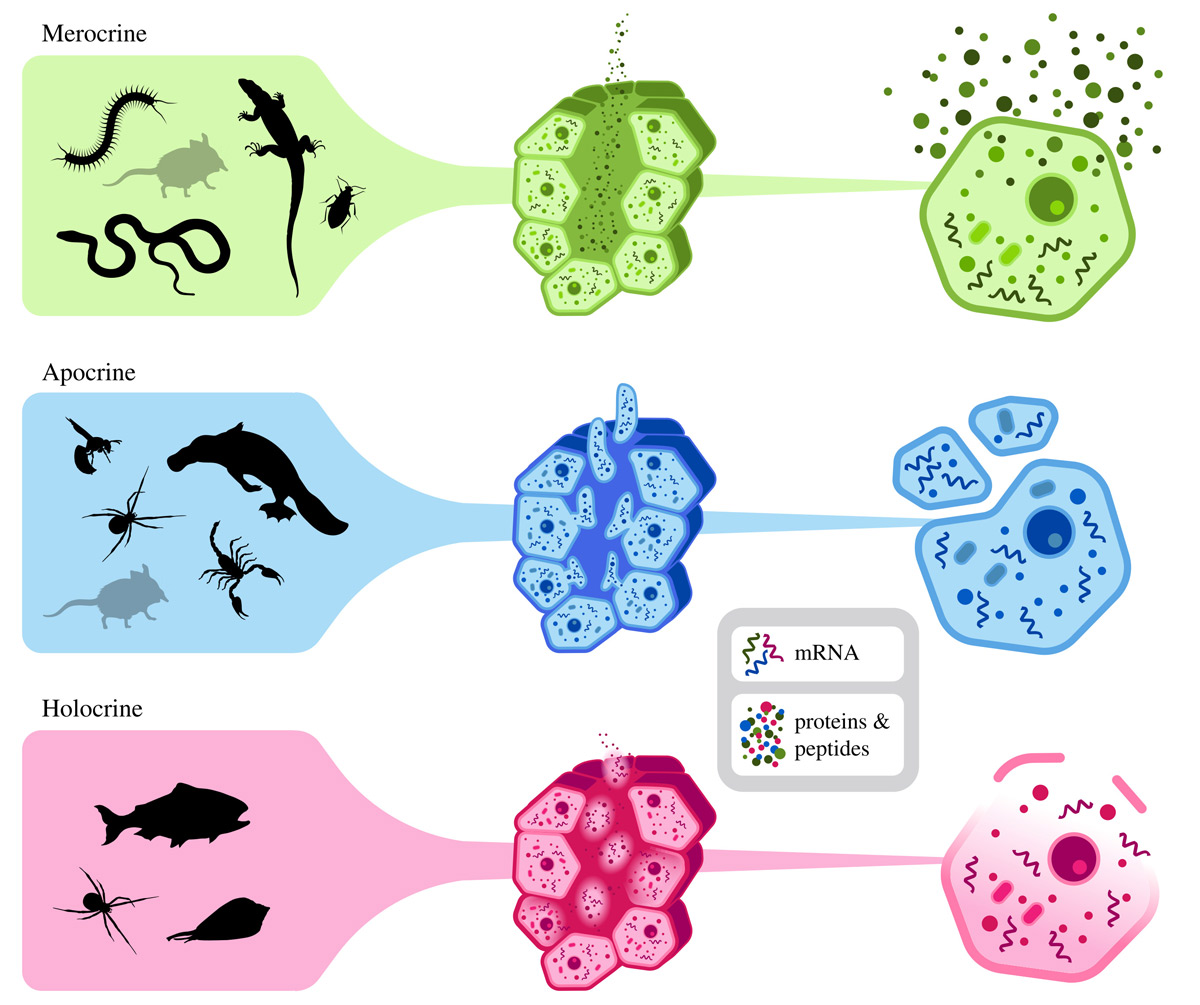 “The manner of venom production probably explains why the new technique does not work on snakes,” said van der Meijden in a related press release. The number of mRNA transcripts in snake venom is low, making sequencing impractical.

When asked if they are planning to explore this technique using other venomous organisms, van der Meijden replied, “My first organism of interest would be a large spider species, but as we state in the paper, the technique can be applied to many very interesting groups! I am sure other researchers will pick this up and study their group of interest.”

“… the technique now makes it possible to study the venom variations in a large number of venomous animals that have scarcely ever, if at all, been studied, such as scorpions, fish and even the platypus.”