UT Southwestern researchers today published in Nature atomic-scale blueprints of the most abundant class of brain nicotinic acetylcholine receptors. A structural understanding of the protein, found in neurons, could lead to new ways to treat nicotine addiction from smoking and vaping.

Three-dimensional structures of nicotinic acetylcholine receptor determined by cryo-EM, courtesy of Hibbs Lab. "When this receptor binds to either the neurotransmitter acetylcholine or to nicotine, it leads to activation of the neuron, which then sends signals to other neurons," said Dr. Ryan Hibbs, corresponding author of the study and Assistant Professor of Neuroscience and Biophysics with the Peter O'Donnell Jr. Brain Institute at UT Southwestern. "This process of 'chemical neurotransmission' underlies all fast communication between neurons. This specific receptor is tightly linked to nicotine addiction."

Researchers obtained the high-resolution structures using the University's $22.5 million cryo-electron microscopy (cryo-EM) facility, where samples are rapidly frozen to prevent the formation of damaging ice crystals and then viewed at minus 321 degrees Fahrenheit (cryogenic temperatures). UT Southwestern's facility - which runs round-the-clock - is one of the world's top facilities for cryo-EM structural biology. 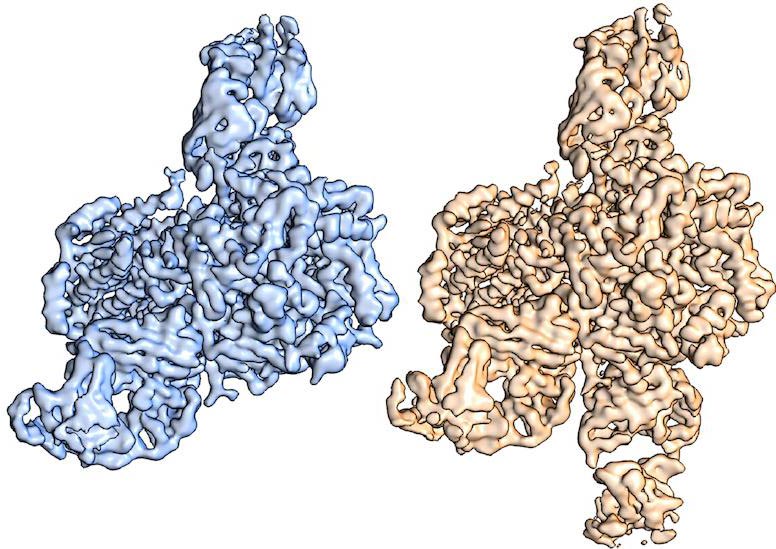 Two novel aspects of the study make it stand out in the fields of structural biology and neuroscience. First, the researchers uncovered new biology about how the receptor binds nicotine in the brain, Dr. Hibbs said. Second are the findings related to technical aspects of how the protein assembles.

"The discovery we made about different ways in which nicotine interacts with this receptor may help in designing drugs to treat nicotine addiction and neurodegeneration," he added. "With respect to assembly of the receptor, classical structure determination techniques generally require a homogeneous sample. However, for this protein, the receptor assembles in multiple ways that have important biological consequences. For example, a misbalance in the ratio of the two subunit arrangements is tied to both nicotine addiction and to congenital epilepsy."

The protein they studied is made up of five subunits, of two types - α and β. These α and β subunits assemble in two different ratios into two distinct five-subunit complexes, a 3α:2β form and a 2α:3β form. Complexes of both ratios are found in the brain.

"We used an antibody labeling approach to identify subunits and overcome challenges in cryo-EM computation to obtain structures of both five-subunit complexes from a single sample. This had not been done before and provides a general approach for determining the structures of many other types of multisubunit channels and receptors that have multiple ways to assemble," explained Dr. Hibbs, an Effie Marie Cain Scholar in Medical Research.

"The two structures are composed of different ratios of α and β subunits. By using an antibody that binds only to the β subunits, we were able to tease out the two structures from one sample - one receptor has two antibodies bound, while the other has three bound," explained lead author Richard Walsh Jr., a graduate student in the Molecular Biophysics program.

The Hibbs laboratory was previously able to obtain a structure of one of the two complexes using X-ray crystallography, a first at that time due to the difficulty of crystallizing membrane proteins.

"For membrane proteins in particular, obtaining crystals that will diffract to high resolution is challenging, which makes cryo-EM particularly powerful. We were previously able to obtain one of these nicotinic receptor subunit arrangements by X-ray crystallography. Cryo-EM gave us both arrangements, from a single sample, at higher resolution," Dr. Hibbs said.