Outsmarting HIV With Vaccine Antigens Made to Order

Outsmarting HIV With Vaccine Antigens Made to Order

HIV was identified as the cause of AIDS in 1983. Despite decades of progress in understanding the virus, an effective vaccine remains elusive.

The lack of success is partly due to HIV’s uncanny ability to evade the immune system.

Now, a team of researchers including Duke computer scientist Bruce Donald and graduate student Mark Hallen have published a 3-D close-up of a designer protein that, if injected into patients, could help the immune system make better antibodies against the virus — a step forward in the 30-year HIV vaccine race.

More than 35 million people worldwide are living with HIV, and about two million more people are infected each year.

Antiretroviral drugs can prevent the virus from reproducing in the body once someone is infected, but only a vaccine can stop it from spreading from one person to the next.

Vaccines work by triggering the immune system to make specialized proteins called antibodies, which prime the body to fight foreign substances. But in the case of HIV, not all antibodies work equally well.

One reason is that HIV is always mutating in the body.

HIV incorporates its genetic material into the DNA of its host, hijacking the cell’s replication machinery and forcing it to make more copies of the virus. Each round of replication generates small genetic “mistakes,” resulting in slightly different copies that the host’s antibodies may no longer recognize.

Even before the body makes an antibody that works against one strain, the virus mutates again and makes a new one.

“It’s a race against a moving target,” said Hallen, who was also an undergraduate at Duke majoring in chemistry and mathematics.

In the early 1990s, researchers discovered that a tiny fraction of people infected with HIV are able to produce antibodies that protect against many different strains at once.

These “broadly neutralizing antibodies” fasten to the virus’s surface like a key in a lock and prevent it from invading other cells.

But HIV can evade detection by these powerful antibodies, as the part of its outer coat that is vulnerable to their attack is constantly changing shape.

To overcome this problem, first the researchers needed a close-up look at the region of interest — a spike-shaped virus protein known as Env — in its most vulnerable state. 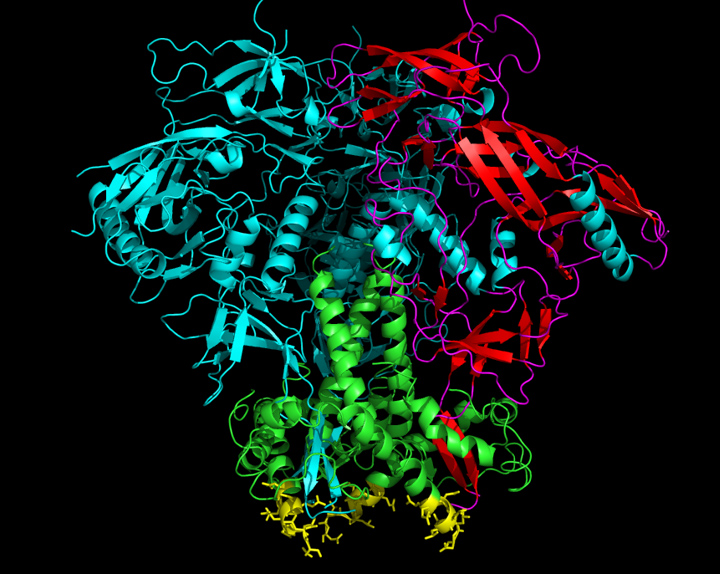 A 3-D closeup of a key virus protein frozen in a shape the researchers say could serve as a template for a vaccine. Image courtesy of Bruce Donald.

With this 3-D blueprint in hand, Hallen and former Duke PhD Ivelin Georgiev developed a scoring system and rated dozens of antibodies according to how well they bound to it. They confirmed that the specific conformation of the Env protein they identified was visible to effective antibodies but not ineffective ones.

The team then identified amino acid sequence changes that would freeze the protein in the desired shape.

Once locked in place, the researchers say, the protein could be injected into patients and used to coax their immune systems into preferentially churning out only the most effective antibodies.