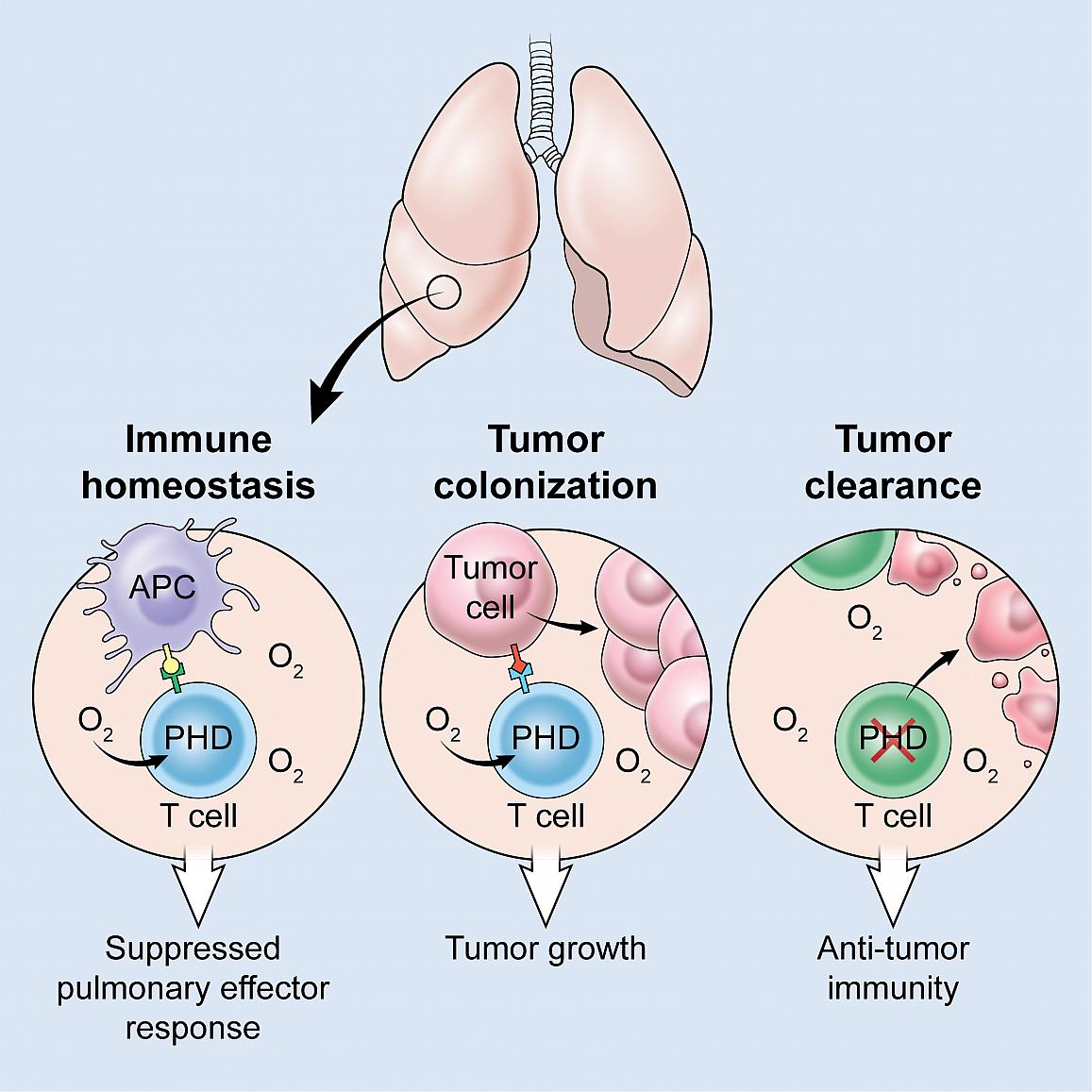 Researchers have identified a mechanism in mice by which anticancer immune responses are inhibited within the lungs, a common site of metastasis for many cancers. This mechanism involves oxygen inhibition of the anticancer activity of T cells. Inhibiting the oxygen-sensing capability of immune cells, either genetically or pharmacologically, prevented lung metastasis. This research was conducted by Nicholas Restifo, M.D., Center for Cancer Research, National Cancer Institute (NCI) and others at NCI as well as colleagues at the National Institute of Allergy and Infectious Diseases, both parts of the National Institutes of Health. The findings appeared Aug. 25, 2016, in the journal Cell.

Metastasis is the cause of most cancer deaths. It has long been hypothesized that the process of cancer metastasis requires cooperation between spreading cancer cells and the cellular environment to which they spread. A key component of that environment is the local immune system, which can act to fight off invading cancer cells.

The researchers discovered that T cells, a type of immune cell, contain a group of oxygen-sensing proteins which act to limit inflammation within the lungs. This new research shows, however, that oxygen also suppresses the anticancer activity of T cells, thereby permitting cancer cells that have spread to the lungs to escape immune attack and establish metastatic colonies.

“Since the lung is one of the most frequent sites to which cancers spread, we hypothesized that there might be unique immunologic processes that aid tumor cells in their ability to establish themselves in the lung. Because oxygen is a pervasive local environmental factor in the lung, we wanted to examine what role oxygen might play in regulating immunity in the lung,” said David Clever, a M.D., Ph.D. candidate who trained in Restifo’s lab, and has now returned to the Ohio State University College of Medicine.

The research team discovered that oxygen-sensing proteins, called prolyl hydroxylase domain (PHD) proteins, act within T cells to prevent overly strong immune responses to harmless particles that frequently enter the lung. This protective mechanism also allows circulating cancer cells to get a foothold in the lung.  Specifically, the researchers found that PHD proteins promote the development of regulatory T cells, a type of T cell that suppresses the activity of other parts of the immune system. They also found that PHD proteins limit the development of inflammatory T cells and restrain their ability to produce molecules involved in cancer killing.

Given their finding that PHD proteins suppress the inflammatory immune response in the lung, the researchers wondered whether inhibiting them might improve the efficacy of adoptive cell transfer, a type of immunotherapy that harnesses the ability of a patient’s own T cells to recognize and attack cancer. In adoptive cell transfer, T cells are extracted from a patient’s tumor tissue, expanded to great numbers in the laboratory, and then administered intravenously into the patient along with a T-cell growth factor, with hopes that these cells will return to sites of cancer and eliminate it.

For these experiments, the research team expanded the antitumor T cells in the presence of a drug called dimethyloxaloylglycine (DMOG), which blocks the activity of PHD proteins. In the lab, the drug treatment improved the cancer-killing properties of the T cells and when administered to mice with established metastatic cancer, the drug-treated T cells were far better at eliminating cancer than untreated T cells. DMOG treatment has also been found to improve the cancer-killing properties of human T cells in other studies.  The application of these findings to human adoptive cell transfer immunotherapy clinical trials is being investigated by Restifo’s group.

“Adoptive cell transfer immunotherapy provides a unique opportunity for manipulation of a patient’s own T cells out of the body,” said Restifo. “Although our finding is in mice, we are eager to test whether disruption of the oxygen sensing machinery in T cells — with drugs, genetics, or regulation of environmental oxygen — will enhance the efficacy of T-cell mediated immune therapies for cancer in humans.”