“It was extraordinary to see the reaction go from zero to 91 percent yield just by adding a photocatalyst and switching on a light,” said David MacMillan, the James S. McDonnell Distinguished University Professor of Chemistry and principal investigator of the work.

For the most part, these C-O cross-coupling reactions have been unattainable by traditional nickel catalysis. That’s because the final bonding-forming step—called reductive elimination—in which nickel excises itself to leave behind a C-O bond, is fundamentally unfavorable. By introducing a photocatalyst, the research team was able to remove a single electron from the key nickel intermediate to access an elusive oxidation state of nickel that can readily form the desired bond. 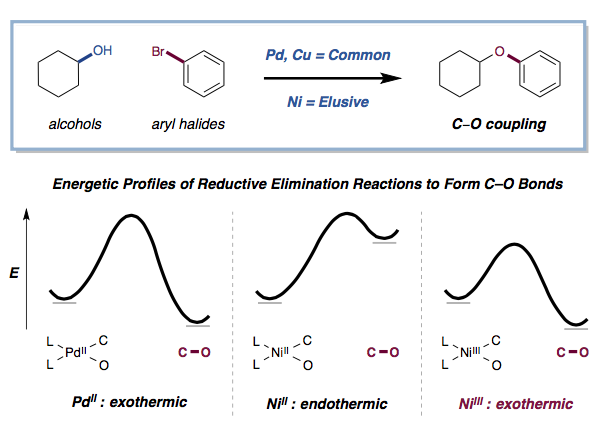 Using a photocatalyst to effectively expand the possible oxidation states of nickel has significant implications beyond this specific transformation. “We assume that it’s not just nickel chemistry that you can dramatically change, but other metals as well,” MacMillan said. “That’s very exciting position to be in.”

To confirm their understanding of how the catalysts worked together to promote the reaction, Valerie Shurtleff, a graduate student in the MacMillan lab and co-author on the paper, performed a series of mechanistic experiments.

The MacMillan group has made many major contributions in the area of photoredox catalysis, but has only recently begun discovering the possibilities that arise from combining photoredox with other forms of catalysis, such as nickel. “There are so many different avenues to explore,” Shurtleff said, “we’re really just getting started.”