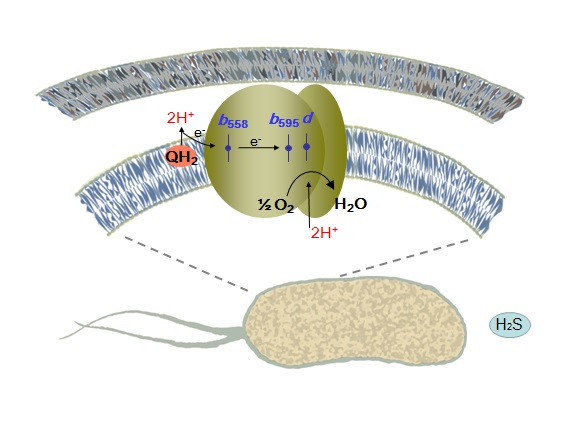 Scientists have discovered how the bacterium E. coli can survive in the human gut - earlier question about how they breathe, was a mystery to experts. Vitaliy Borisov, Senior Researcher, Doctor of Biological Sciences, Professor of Russian Academy of Sciences, Research Institute Fellow Physico-Chemical Biology named after AN Belozersky State University and one of the authors, explains that breathing E. coli uses special enzymes, which are absent in the human body. This means that the opening of the scientists can contribute to the creation of new drugs, which will be detrimental to act on the bacteria without harming the person.

The energy for the life of any organism comes from food, and is generated by means of redox processes in the body. The food is converted into energy immediately, not directly but through intermediaries. First, the complex molecules are decomposed into simpler: proteins are decomposed into amino acids, fats - fatty acids to carbohydrates - to monosaccharides. Oxidation of simpler molecules releases energy, and all of it is contained in the electrons.

The electron is passed to the respiratory chain in the so-called reducing equivalents (compound carrying electrons). They are NADH (nicotinamide adenine dinucleotide) and ubiquinol, also known as coenzyme Q. These two basic recovery equivalent fully cope with the processing of food: NADH is a water soluble compound and ubiquinol - fat soluble. Membranous enzymes of reducing equivalents and accept electrons is transferred to molecular oxygen.

The terminal cytochrome oxidase - the main membrane enzyme responsible for the human mitochondrial respiration and was thought before, for the breath of E. coli, too. The scheme is simple oxidases action: transferring electrons to molecular oxygen, reducing equivalents are oxidized again, with the result that is generated "energy currency" of the cell - the proton-motive force.

"If you stop breathing, we'll die just because oxygen will not flow to the oxidase, and it will not produce energy", - says Vitaly Borisov.

The bacterium Escherichia coli (E. coli) live in the gastrointestinal tract, where a lot of hydrogen sulfide produced by attenuating mitochondrial respiration. Free hydrogen sulfide inhibits cytochrome oxidase work. Its concentration in the hundreds of times greater than the minimum concentration required for blocking this essential enzyme. This would seem to mean that "breathing" bacteria E. soline can, but in spite of all the bacteria somehow survive in the intestine. The researchers hypothesized that the presence of hydrogen sulphide in the breath is still possible, but due to other oxidase. The fact that the breath in people and bacteria occur in different ways. Every cell in our body "breathes" through the work of only the cytochrome-c oxidase, others we have not. And E. coli bacteria oxidase has two types of cytochrome bo type (analog of "human" cytochrome c oxidase) and cytochromes completely different-bd.

"Our hypothesis was that the type oxidase bd (bd-I and bd-II) are more resistant to inhibition by hydrogen sulfide than type cytochrome bo», - Vitali Borisov commented.

To test this hypothesis required to learn how sulfide present in the environment affects the growth of the bacteria cells E. coli, in which the respiratory chain has only one terminal oxidase (bd-I, bd-II or bo). We used a variety of biochemical, biophysical and microbiological methods and approaches, as well as the method of obtaining directed mutations.

The hypothesis was fully confirmed. "Bo oxidase activity is completely inhibited by the hydrogen sulfide, while at work oxidases bd H 2 S is not valid. Thus, in order to successfully produce the main types of "energy currency" in a high content of hydrogen sulfide, the representatives of the intestinal microflora should use a unique type of terminal oxidases, which is missing in the cells of humans and animals, "- says Vitaly Borisov.

The discovery could be used in the future to develop medicines that regulate the intestinal microflora and relieving it from harmful bacteria. Because human cells do not contain oxidase type bd, it becomes relevant the question of the ability to combat disease-causing bacteria, without causing harm to the human body. For example, the bacterium causing tuberculosis, primarily membrane enzyme, which is also a type oxidase bd, quickly gaining resistance to classical antibiotics. Through this study there was the prospect of a new type of antibiotics "overlying oxygen" only harmful bacteria cells, not human cells.