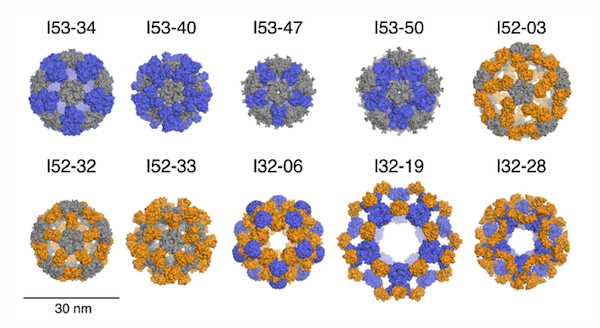 Using novel computational and biochemical approaches, scientists have accurately designed and built from scratch 10 large protein icosahedra - polyhedra with 20 faces - similar to viral capsids that carry viral DNA. The designed structures are made of two different engineered proteins, present in 60 copies each, which self-assemble into icosahedra. They have a wide variety of potential applications, from targeted drug delivery to the development of more effective vaccines, the researchers say.

The findings, reported in Science, follow a report in Nature last month by the same team describing the creation of the first designed icosahedron made of 60 copies of a single protein subunit. The current paper describes the design and construction of 10 icosahedra from two different protein subunits.

“The remarkable thing is that the computational design model is really close to the actual structure,” said HHMI Investigator David Baker of the University of Washington Institute for Protein Design, who led the study. “These are definitely the largest structures that have been created using computational design methods … so it’s a real milestone for protein design, because we can design these really complicated structures from scratch on the computer and they come out exactly right.”

Graduate student Jacob Bale working with Baker and Neil King, an acting assistant professor at the Institute for Protein Design, used Rosetta, a protein-design computer program developed in Baker’s lab over many years, to optimize amino acid residues that form the interface between proteins to make them fit with each other. “You want to design proteins so that when they come together, the interactions cause the proteins to form an icosahedron,” explained Baker. Because the work is so computationally intensive, the researchers relied on a crowd-sourcing platform called Rosetta@home, which allows members of the public to donate cycles of their idle computers to run jobs for computing protein structures.

Once the researchers had created designs that the computer predicted would form icosahedra, the next step was to test out the designs. Bale engineered synthetic genes that encoded the designed proteins and introduced those genes into bacteria. He purified the proteins from the bacteria and developed new screening methods to determine which ones were forming icosahedra.

Once the putative icosahedra were identified, the researchers needed to characterize the structures to verify whether they matched the predictions. Through the Visiting Scientist Program at HHMI’s Janelia Research Campus, Shane Gonen, a graduate student in Baker’s lab, came to his brother Tamir Gonen’s lab at Janelia to use the cryo-electron microscope (cryo-EM), and they were able to confirm that the designs came out very close to predictions from the computational models. “Any scientist from anywhere in the world, if they have a collaboration with someone at Janelia, can apply for a visitor project, and the scientist will be able to come here for up to a year and live on campus and do research at Janelia,” said Gonen. “The vast majority of my collaborators actually come in through the visitor program. It just makes things a lot easier,” he added.

The researchers envision that the icosahedra they designed could be used for many applications: to package a chemotherapy agent to deliver it to a specific organ, or to design more effective vaccines, which produce a stronger immune response if the immunogen is presented in a form that makes it look like a virus, Baker explained.

“Although viral capsids have been used for targeted drug delivery and as a vaccine platform, they didn’t evolve for that,” said Baker. “As we pursue applications, we can design protein structures specifically for that application, so you don’t get a lot of evolutionary baggage, of things evolving for one reason and then trying to adapt them for a new purpose,” he explained. In addition to pursuing applications, future work will focus on designing “more dynamic structures that undergo structural transitions in response to environmental changes,” he said.