Researchers Pioneer Use of Capsules to Save Materials

Researchers Pioneer Use of Capsules to Save Materials

Chemists working in a variety of industries and fields typically go through a laborious process to measure and mix reagents for each reaction they perform. And many of the common reagents they use sit for months or years on shelves in laboratories, where they can react with oxygen and water in the atmosphere, rendering them useless.

Researchers at MIT describe a technique that could help avoid this costly waste, and greatly reduce the number of steps a chemist must perform to prepare common compounds for use in a wide range of chemical transformations.

Aaron C. Sather, the lead author of the paper, is a postdoc in the lab of Stephen Buchwald, the Camille Dreyfus Professor in Chemistry. He and his colleagues have harnessed the power of a small, simple technology that could transform the benchtop practice of organic chemistry: the capsule.

Some labs use what is known as a “glove box,” an inert container that permits researchers to manipulate reagents in a controlled environment, isolated from the oxygen, carbon dioxide, and water in ambient air. But many laboratories in industry and academia don’t have glove boxes because they’re expensive to maintain, and take up precious space, Sather says. As a result, many chemists avoid performing certain useful, but complicated, reactions because they require a glove box.

Many reagents and catalysts aren’t used simply because of this inconvenience. What’s more, for a bench chemist working in materials science or pharmaceuticals, performing the complex sequence of steps to prepare certain compounds may be unfamiliar and onerous.

“If you can grab the reagents off the shelf and get the reaction to work without that expertise or a glove box, it’s much more accessible,” Sather says.

Building on previous work by Douglass Taber at the University of Delaware, the researchers tried to disperse mixtures of reagents in molten paraffin wax, which has been demonstrated to protect oxygen- and water-sensitive compounds for long periods of time. But as the material cooled, certain dense reagents, such as cesium fluoride, would settle to the bottom. The scientists then decided to try making small capsules out of paraffin, enabling precise estimates of the contents for grab-and-go use.

“We thought, if we could enclose multiple reagents [and] catalysts in some way and actually know how much we put in,” Sather says, “we could dramatically simplify chemical synthesis with these single-use capsules.” 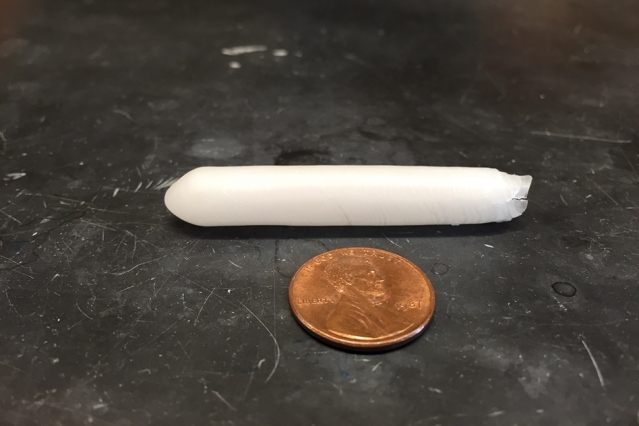 Paraffin’s physical properties make it ideal as a delivery vehicle for all kinds of chemical compounds. “We wanted something that was inert, a long-chain hydrocarbon,” Sather says, “that would have no competing side reactions with both catalyst and reagents. It’s largely unreactive. Paraffin is insanely cheap, and nice and easy to work with. Paraffin doesn’t pick up any water — it’s just like grease.”

Sather and co-authors Hong Geun Lee and James Colombe made the capsules by hand, using a glass stir rod to make the hollow shells. Then they filled them with dry reagents, and used a hot metal spatula to melt the wax and seal it off. The resulting capsules look like slightly bigger versions of the gelcaps sold over the counter at any drug store.

The team applied the paraffin capsule technology to a variety of reactions, focusing on combinations that are of broad applicability and interest across different fields, from making sensors to making pharmaceuticals. As an example, the researchers combined an oxygen-sensitive catalyst with cesium fluoride in capsules. They performed the same reactions using these capsules, and then in a glove box, and achieved similar results for both approaches.

Ironically, in order to prepare this “glove box-free” system, the group had to use a glove box to actually make the capsules. But the whole production process could easily be mechanized, Sather says, creating a low-cost, widely accessible alternative to glove boxes. Companies could sell hollow capsules for chemists to load themselves, or sell them pre-measured and pre-loaded.

Once they were made, the capsules dramatically simplified the benchtop chemistry. “Instead of weighing out multiple reagents and catalysts, you’re adding a capsule and weighing out one or two compounds,” Sather points out. “It’s really quick, especially for people who want to make a lot of molecules.”

The capsules also proved to be durable. The researchers took capsules filled with cesium fluoride — which is very water-sensitive — and immersed them in water overnight. The next day they took them out, dried them off with a paper towel and used them in a reaction.

“The result was the same,” Sather says. “It told us that they’re completely sealed. In terms of protecting water-sensitive compounds inside these capsules, the potential is huge.”

Sather says wider use of this technique could greatly extend the shelf life of common commodity chemicals. To demonstrate this, he and his colleagues prepared capsules containing multiple base-activated catalysts, along with strong bases, all mixed together in the solid state.

“They were still good after eight months on the benchtop, mixed together inside the capsule,” Sather says. “There was no decomposition. And they weren’t stored in any special way — just put in a plastic bin.”

The researchers had similar success in an experiment conducted with a reagent that would degrade in hours if exposed to air; after more than a year of storage on the shelf in capsule form, there was no degradation.

Sather is most excited by the potential for this technology to make the work of chemists more efficient, and to widen access to demanding but useful reactions by overcoming the inconvenience and tedium associated with glove boxes.

“With all of the reactions we develop in this lab,” Sather says, “we keep the practitioner in mind. If it’s really hard to do, no one’s going to use it. We really want people to use the chemistry we work so hard to develop.”

Phil Baran, a professor of chemistry at the Scripps Research Institute who was not involved in the study, compares the work to the breakthrough in the early 1800s that allowed the delivery of drugs in pill form.

Baran observes that this development “opens up many new venues for both reactivity exploration in academic settings and in the many areas of industrial science that require rapid diversification and automation. Thus, as more catalysts and reagents become available as capsules, the influence of this approach will likely be seen in the pharmaceutical, agricultural, and material industries. It may not be too unrealistic to predict that Buchwald’s capsules will do for organic chemistry what … pills did for medicine.”