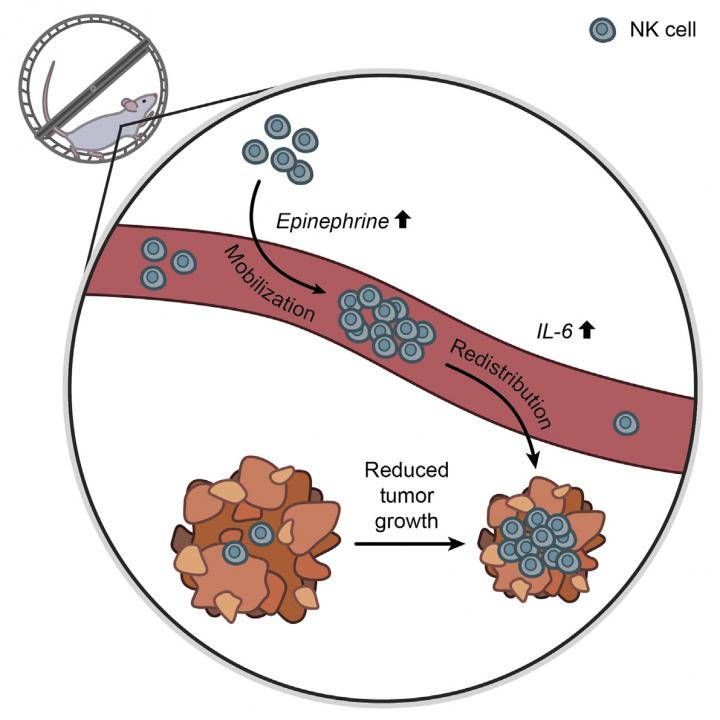 Researchers found that the surge of adrenaline that comes with a high-intensity workout helped to move cancer-killing immune (NK) cells toward lung, liver, or skin tumors implanted into the mice.

"It is known that infiltration of natural killer (NK) immune cells can control and regulate the size of tumors, but nobody had looked at how exercise regulates the system," says senior study author Pernille Hojman, at the University of Copenhagen. "In our experiments, we tried to inject our mice with adrenaline to mimic this increase you see during exercise, and when we do that we see that the NK cells are mobilized to the bloodstream, and if there's a tumor present then the NK cells will find the tumor and home to it."

Hojman and her colleagues next used mice depleted of NK cells to show that the increase in number of NK cells at the site of the tumor was directly contributing to the reduction in size. Even with exercise and a full suite of other immune cells, without the NK cells these mice experienced the normal rate of cancer growth. Blocking the function of adrenaline also blunted the cancer-killing benefits of the running wheel.

The research group also discovered that an immune signaling molecule called IL-6 was the link between adrenaline-dependent mobilization of NK cells and tumor infiltration. It's known that IL-6 is released from muscle tissue during exercise, but Hojman presents evidence that adrenaline specifically hails IL-6 sensitive NK cells and that the IL-6 molecules helped guide the immune cells to the tumors.

"That was actually a big surprise to us," she says, adding that IL-6 and its role in tumor biology can be a controversial topic. "In this study we show that the exercise-induced IL-6 seems to play a role in homing of NK cells to the tumor and also in the activation of those NK cells."

While the research is hopeful for patients looking for inexpensive ways to manage their cancer, more needs to be learned about the effects of exercise on metastasis and longevity, as well as if the observations hold true in humans. Hojman also wants to explore the combined impact of anti-cancer treatments and exercise on tumors.

"As someone working in the field of exercise and oncology, one of the main questions that cancer patients always ask is: how should I exercise? Can we do anything?" she says. "While it has previously been difficult to advise people about the intensity at which they should exercise, our data suggest that it might be beneficial to exercise at a somewhat high intensity in order to provoke a good epinephrine surge and hence recruitment of NK cells."