Small Molecules Lead to a Big Change in Reaction Outcomes

Small Molecules Lead to a Big Change in Reaction Outcomes 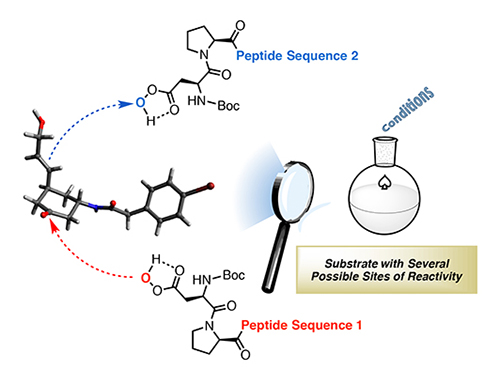 Yale scientists have found a way to rewire the behavior of an important group of small molecules involved in the synthesis of carbon-oxygen chemical bonds.

The process allows small, synthetic molecules to exhibit the functional diversity of much larger enzymatic catalysts, and offers a promising new tool for synthesizing therapeutics based on natural products. The findings appear in the journal ACS Central Science.

“In a sense, this is a miniaturization exercise,” said principal investigator Scott Miller, the Irénée du Pont Professor of Chemistry at Yale. “This is fundamental work in which we’re trying to control the way we make chemical bonds.”

A host of natural products exist that have beneficial properties for new drugs — yet many of them also have negative side effects. One of the challenges for researchers is to guide the action of catalysts in a way that alters the molecular structure of a target, like a natural product, to eliminate toxic effects while retaining beneficial properties.

Miller’s lab has been able to tune the bond-forming functions in peptide-based catalysts, which are similar to nature’s enzymes in that they are composed of amino acids, but are orders of magnitude simpler in terms of their molecular size. The researchers did this by changing the framework — or scaffolding — of the small, synthetic molecules. The new molecules are able to perform fundamentally different tasks, despite common catalytic fragments.

“We’ve created scaffolding that tailors a critical part of the catalyst,” Miller said. “We now hope to apply these ideas to modify the structures of biologically active products. It creates opportunities for doing quite complex synthesis.”

What Is the Best Approach to Psychedelic Therapy? An Interview With Field Trip’s Ronan Levy