A new study provides evidence from lab experiments that a drug already used in people to fight tapeworms might also prove effective against strains of the superbug MRSA, which kills thousands of people a year in the United States. 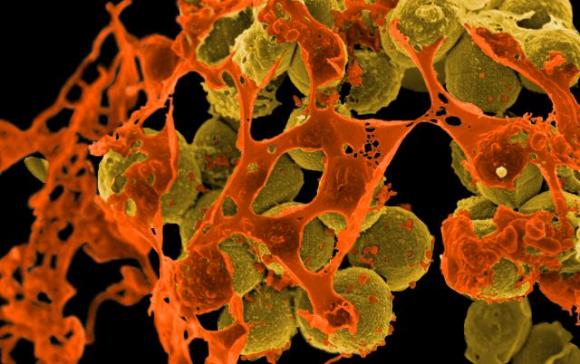 Methicillin-resistant Staphylococcus aureus — MRSA — kills thousands of people in America every year. A common tapeworm drug, already approved for use in humans, could be a new tool against MRSA. Image: NIH/NIAID

The paper, published in the journal PLoS ONE, showed that niclosamide, which is on World Health Organization’s list of essential medicines, suppressed the growth of dozens of methicillin-resistant Staphylococcus aureus (MRSA) cultures in lab dishes and preserved the lives of nematode worms infected with the superbug. In these tests, both niclosamide and a closely related veterinary parasite drug, oxyclozanide, proved to be as effective (at lower concentrations) as the current last-resort clinical treatment, vancomycin.

The drugs both belong to a family of medicines called salicylanilide anthelmintics and they both also trounced another “gram positive” pathogen, Enterococcus faecium, in lab tests.

“Since niclosamide is FDA approved and all of the salicylanilide anthelmintic drugs are already out of patent, they are attractive candidates for drug repurposing and warrant further clinical investigation for treating staphylococcal infections,” wrote the lead author Rajmohan Rajamuthiah, a postdoctoral scholar in the Warren Alpert Medical School of Brown University and Rhode Island Hospital.

Last year the team reported that after screening more than 600 drugs against infected nematode worms, it had found that the salicylanilide anthelmintic drug closantel appeared to be protective for the worms. That led to the new research, where they tested niclosamide and oxyclozanide.

In their experiments, even low concentrations of the drugs allowed more than 90 percent of MRSA-infected worms to survive, compared to less than 20 percent survival among controls. In the petri dishes the drugs cleared gaping zones of growth inhibition in MRSA culture spread over the plate, while a control substance did nothing.

Between the two, oxyclozanide proved to be a more effective MRSA killer, while niclosamide effectively suppressed MRSA growth but did not completely eradicate the bacteria. Although niclosamide proved to be “bacteriostatic” instead of “bactericidal” like oxyclozanide, it may still pack plenty of punch to keep MRSA in check and give the body’s immune system the upper hand, Rajamuthiah said.

The researchers tested the effects of the drugs on mammalian cells, including sheep red blood cells (which fared just fine) and cancerous human liver cells (which happen to be easier to use than healthy liver cells). Niclosamide proved to be significantly toxic against the cancer cells, which other studies had shown before, but the drug is already approved for human use.

The team also tested a hypothesis about how the drugs attack the bacteria. As they suspected, oxyclozanide appeared to work by disrupting the bacterial cell’s membranes, but there was no sign that niclosamide worked the same way.

The researchers acknowledge that petri dishes and worms are not substitutes for people, and some issues need further investigation. For example, people have been shown to clear niclosamide out of their systems quickly, and the drug does a poor job of working its way out of the bloodstream and deep into tissues.

“The low level of systemic circulation coupled with the rapid elimination profile of niclosamide suggests the necessity for further testing of the potential of niclosamide and oxyclozanide for treating systemic infections,” they wrote. “Further studies should include the evaluation of these compounds in systemic and localized infection models in rodents.”

Rodent experiments are being planned.

But there may also be an upside to the rapid clearance, Rajamuthiah said. That might limit the toxicity of the drug, and until it is tested, it’s not clear that quick clearance would undermine the drug’s performance against MRSA.

“Remember that no one has ever tested niclosamide for treating bacterial infections,” he said.

If niclosamide, which is already used in humans for one purpose, can also help them fight off a superbug, or if its apparently more effective and less toxic cousin oxyclozanide can gain approval for human use, doctors could obtain much needed ammunition against MRSA.

“The relatively mild toxicity of oxyclozanide is encouraging based on in vitro tests,” Rajamuthiah said. “Since it has never been tested in humans and since it belongs to the same structural family as niclosamide, our findings give strong impetus to using oxyclozanide for further investigations.”

Particularly important is that because oxyclozanide attacks the cell membrane instead of metabolic pathways, it may be more difficult for MRSA to develop resistance, Rajamuthiah said.