The Art of Pipetting

The Art of Pipetting 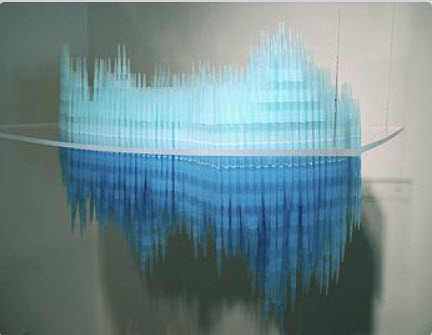 When Labware Turns into Sculptures

For most laboratory scientists, pipette tips are an everyday sight, part of the background scenery that barely registers. But somehow Mitra Fabian’s iceberg sculpture ‘B9’ – made from recycled pipette tips – looks ingenious in a ‘real world’ setting.

Mitra Fabian is a sculptor and installation artist who strives to serve a larger purpose when creating her art. “My choice of material is influenced in part by a desire to avoid generating waste," she explains. "I like to recycle materials that would otherwise be destined for the landfill." Mitra almost exclusively works with manufactured material, the leftovers, the by-products, the remnants of human industry.

Currently residing in the San Francisco Bay Area of Northern California, Mitra's choice of pipette tips for the 'B9' sculpture was in part by the large number of biomedical companies in the area. "They often have surplus or out-of-date stock which they are happy to donate,” Mitra explains.

A pipette tip is a plastic component that attaches the orifice end of a micropipette to accurately aspirate and dispense liquids. The need to transfer specific volumes of liquid in both the laboratory and industrial environments has existed for at least two centuries. The earliest serological and volumetric pipettes were large, long glass devices, capable of aspirating and dispensing relatively large liquid volumes of up to perhaps 100 mL. During the first half of the twentieth century, greater emphasis was placed upon the use of smaller sample and reaction volumes or "micro-pipetting" within the laboratory environment, which necessitated the development of considerably smaller and exceedingly more accurate liquid transfer devices. The pipette tip was invented in 1957 with the development of the first micropipette.

The modern pipette tip generally assumes the form of a highly tapered conical structure and is generally molded from polypropylene. The large-bore "sealing end" of the tip allows it to be attached to the hand-held pipette, while the much narrower "orifice end" employs a narrow aperture to accurately control the flow of liquid into and out of the tip in response to the mechanical action of the pipette. The modern tip is an inexpensive, disposable (consumable) tool, used in a repetitive manner in vast numbers. Pipette tips are often augmented with a porous polyethylene filter to prevent aerosol contamination of the pipette.

So, what was Mitra's esthetic behind 'B9'? “I was looking for some translucent plastics that conduct light in interesting ways. I’d used pipette tips in previous projects, but only clear or yellow tips and, when I came across these blue pipette tips, they immediately reminded me of the sea and ice. At the time, there was a lot in the news about icebergs and global warming, and B9 was the result – it’s actually named after a real iceberg.”

Mitra gives us the scoop on her experience with pipette tips. "It was, frankly, a complete nightmare putting that piece together! I hadn’t realized when I started was that it would be virtually impossible to glue the tips together. I went through around 20 different kinds of colorless, translucent glue hoping to find something that would work, but to no avail. In the end I just had to really jam them together and use friction to hold them in place." Mitra's experience sounds very similar to those in the lab – the pounding and rocking that can be heard in any lab to jam the tips onto regular pipette shafts!

Mitra's artistry is highly respected amongst pipette tip manufacturers like Rainin, a subsidiary of Mettler Toledo, who is committed to finding new ways to further minimize their environmental footprint. Rishi Porecha, Pipette Product Manager at Rainin explains, "We are committed to producing the highest quality products in the most sustainable and environmentally-sensitive manner available. From production and packaging to marketing and distribution, we are actively applying sustainable technologies and techniques today, and have committed to finding new ways to further minimize our environmental footprint in the future. We are grateful for individuals like Mitra who are able to find alternative solutions to help minimize plastic waste".

About Mitra Fabian
Mitra Fabian, who was born in Iran and raised in Boston, received a BA in Art with a minor in Anthropology from Kenyon College in Gambier, Ohio. She later received an MFA from California State University, Northridge. Mirta is currently a professor at West Valley College teaching sculpture and ceramics. Fabian began showing her work nationally in 1997. Her work has been featured in shows at the Museum of Contemporary Craft, the Laguna Art Museum, the Armory Center for the Arts, San Jose Institute of Contemporary Art, Bemis and prominent galleries in Los Angeles and San Francisco. In 2014, Mirta completed a solo exhibition On Site in the Thacher Gallery at the University of San Francisco, San Francisco, CA.

The Complete Guide to Multiplex Assays in Drug Discovery