Complete the form below and we will email you a PDF version of "Treating Hearing Loss: The Hunt for Drugs That Promote Hair Cell Regeneration"

A research team from Nanjing University has used cochlear organoids to identify drugs that can promote the regeneration of hair cells. The study, published in Stem Cell Reports, also identifies a signaling pathway as a potential target for hearing restoration.

Hearing is a complex multistep process that allows us to detect sound and involves three key parts of the ear – the outer, middle and inner ear. Sound waves are collected by the pinna of the outer ear and are funneled into the ear canal until they meet the ear drum (tympanic membrane), causing it to vibrate.

The resulting vibrations are transmitted to the ossicles – comprising a chain of three small bones called malleus, incus and stape – located within the middle ear. Movement of the bones transmits the sound vibrations to the inner ear, sending a signal to the cochlea (a hollow spiraling structure filled with fluid). Vibrations cause the fluid within the cochlea to ripple, forming waves that stimulate the movement of hair cells positioned on the top of the basilar membrane that separates the two fluid-filled chambers running along the cochlea.

Cochlea hair cells are “tuned” to respond to various pitches of sound: those positioned at the widest part of the cochlea detect higher-pitched sounds whereas the cells located towards the center detect lower-pitched sounds. The hairs generate an electrical signal that is carried by the auditory nerve to the brain – converting it to a “sound” that we can recognize. 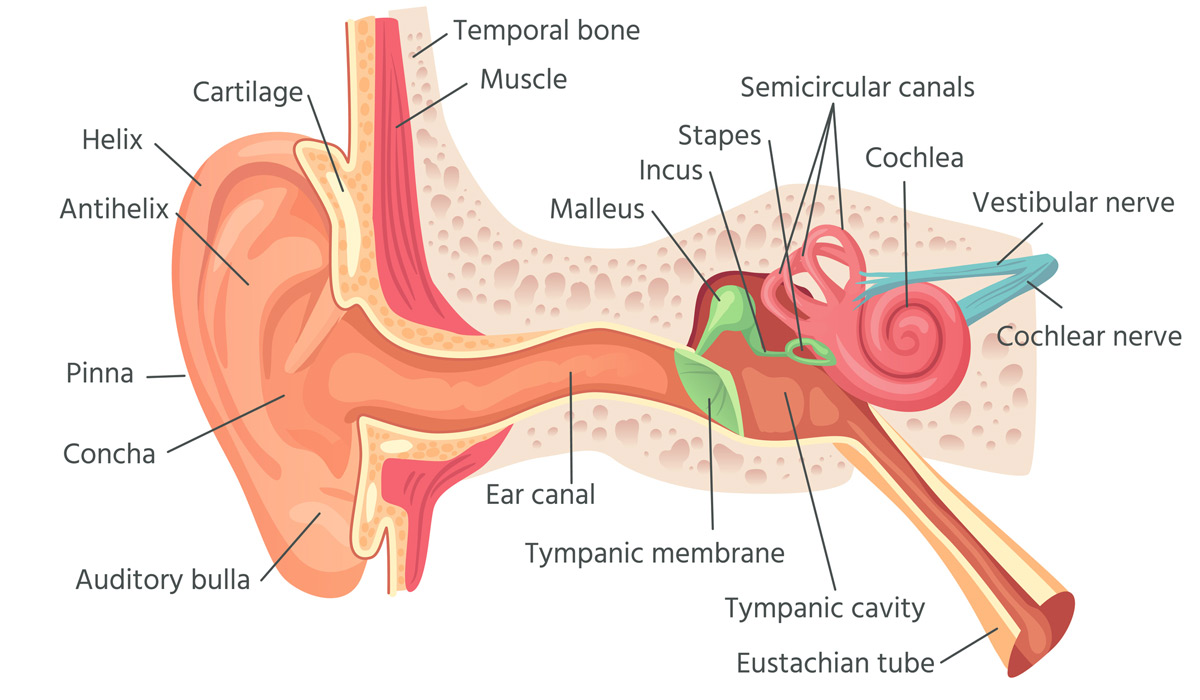 Figure 1. Structure of the human ear.

Hearing loss affects more than 300 million people across the globe and can be caused by a variety of factors. “Hearing loss can arise from genetic defects, aging and exposure to loud noises or ototoxic drugs; however, hair cell degeneration is regarded as the major long-term cause of hearing loss,” explains the study’s senior author, Guoqiang Wan, from the Medical School of Nanjing University, China.

While birds and amphibians are able to regenerate lost hair cells, this isn’t the case for mammalian cochlea hair cells – they cannot be repaired or replaced, and so their destruction results in hearing loss. “In the cochlea, hair cells are surrounded by a group of supporting cells, which share common ancestors as the hair cells and are less vulnerable to damage,” says Wan.

He notes that current efforts to treat hearing loss have been directed to induce conversion or reprogramming of these supporting cells to produce functional hair cells: “Some of the known reprogramming signals include Notch inhibition, Wnt activation and expression of transcription factors such as Atoh1 or Pou4f3. However, it is likely that additional mechanisms are involved in efficient regeneration of mature and functional hair cells.”

The hunt for hair cell-inducing drugs

To explore the potential underlying mechanisms of hair cell regeneration, Wan and colleagues generated cochlear organoids – self-organizing three-dimensional assemblies of cells – derived from cochlear progenitor cells from neonatal mice. “After optimization of the culture methods, we can obtain over 12,000 organoids from a single mouse. These organoids enable us to perform multiple high-throughput studies to discern the biology of hair cells,” explains Wan.

Wan explains that the key benefit to using organoids, compared to two-dimensional cultures, is that they can “faithfully recapture some of the key inner ear development processes and are able to differentiate into hair cells with remarkable structural and functional similarities to the native hair cells.”

The organoids were used to screen a library of US Food and Drug Administration (FDA)-approved drugs to determine if any were able to stimulate the formation of hair cells. The high-throughput screen identified an anti-cancer drug called regorafenib that could do just that.

“Regorafenib is a clinically-approved drug for the treatment of gastrointestinal tumors. It works by suppressing the formation of new blood vessels required by tumors. Interestingly, in our study, regorafenib promotes hair cell regeneration in a different mechanism, whereby it inhibits the production of an anti-differentiation molecule TGFB1. It is a fine example of how unbiased screening can uncover new drugs with previously unrecognized effects,” says Wan.

Until now, according to Wan, a key obstacle to the large-scale screening of modulators for hair cell regeneration was the lack of a high-throughput mammalian hair cell culture platform. Wan elaborates, “We believe that the development and application of cochlear organoids, along with recent advances in multiomics and gene editing tools, should greatly move this area forward.”

Several further studies are ongoing in the laboratory. As for regorafenib, the researchers are currently investigating its hair cell-inducing effects in vivo in preclinical rodent models. “We are also expanding the drug library to identify new molecules and signaling pathways for differentiation and maturation of hair cells.”

“Lastly and importantly, the cochlear organoid system enables us to perform multiomics and large-scale gene editing studies to uncover secrets in the development and regeneration of mammalian hair cells,” concludes Wan.