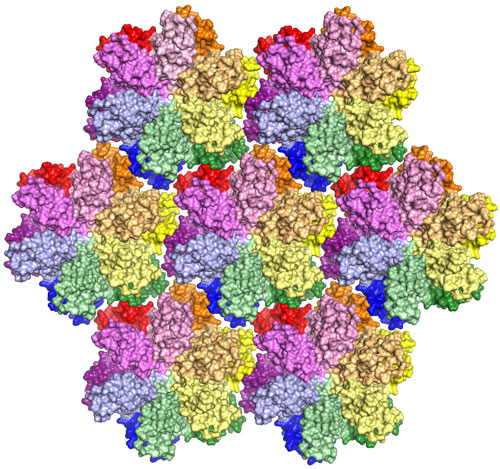 HIV, or human immunodeficiency virus, is the retrovirus that leads to acquired immunodeficiency syndrome or AIDS. Globally, about 35 million people are living with HIV, which constantly adapts and mutates creating challenges for researchers. Now, scientists at the University of Missouri are gaining a clearer idea of what a key protein in HIV looks like, which will help explain its vital role in the virus’ life cycle. Armed with this clearer image of the protein, researchers hope to gain a better understanding of how the body can combat the virus with the ultimate aim of producing new and more effective antiviral drugs. 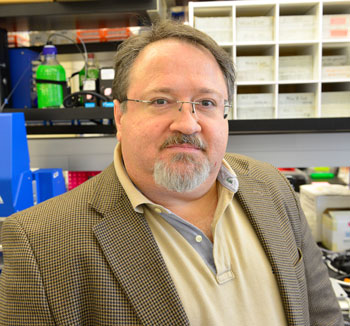 In recent years, scientists have used various techniques to determine the structure of the capsid protein, which is the building block of an inner shell of HIV. Until now, the clearest image had been of a mutated protein. Stefan Sarafianos, an associate professor of molecular microbiology and immunology and the Chancellor’s Chair of Excellence in molecular virology in the University of Missouri School of Medicine, and his team captured long sought detailed images of the capsid protein in its natural state.

“The capsid shell acts as an ‘invisibility cloak’ that hides the virus’ genetic information, the genome, while it is being copied in a hostile environment for the virus,” said Sarafianos, who also holds an appointment in the Department of Biochemistry in the College of Agriculture, Food and Natural Resources and serves as a researcher at the Bond Life Sciences Center. “Fine-tuned capsid stability is critical for successful infection: too stable a capsid shell and the cargo is never delivered properly; not stable enough and the contents are detected by our immune defenses, triggering an antiviral response. Capsid stability is a key to the puzzle, and you have to understand its structure to solve it.”

Sarafianos and his team created the most complete model yet of an HIV capsid protein. The research team used a technique called X-ray crystallography to unravel the protein’s secrets. By taking many copies of the protein, they coaxed them into forming a patterned, crystalline lattice (see photo).

“With X-ray crystallography, the biggest challenge is to get protein crystals of good quality that will allow researchers to accurately study the protein,” said Anna Gres, an MU graduate student in the Department of Chemistry and first author of the study. “Sometimes this process can take years, but by using advanced techniques, we were able to cut that down considerably.” 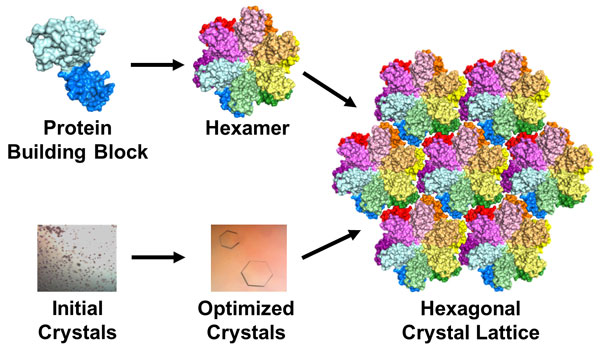 Next they shot high-powered X-ray beams at the crystal. By interpreting how the X-rays scattered when they ricocheted off the proteins, the researchers made a 3-D map of the protein. “But the 3-D map doesn’t make sense until we make an atomic model of the protein to fit in that map,” said Karen Kirby, a research scientist at Bond LSC and co-author of the study. “The map is just a grid that you can’t really interpret unless you put a model into it to see ‘Ok, it looks like this part is here, and that part is there, and this is how the protein is put together.’”

Gres constructed the model, which surprisingly revealed “ordered” water molecules at areas between the viral proteins.

“We thought, ‘How could some simple water molecules really be of consequence?’” Sarafianos said. “But when we looked carefully, we realized there are thousands of waters that help stabilize the complex capsid scaffold. We hypothesized that this is an essential part of the stability of the whole capsid assembly.”

To test that hypothesis, they dehydrated the crystals using chemicals and noticed that the proteins in them changed shape. This change suggested that water molecules help the capsid shell to be flexible and assume different forms, which is critical for the life cycle of the virus, Sarafianos said.

The National Institutes of Health recently awarded the team a grant of $2.28 million over five years to continue their study. Future studies using the newly developed model will assist Sarafianos and his team as they work toward developing antiviral drugs that combat the disease by taking advantage of the new findings.

The study, “X-Ray Crystal Structures of Native HIV-1 Capsid Protein Reveal Conformational Variability,” was recently published in the journal Science. Research funding has been provided by the National Institutes of Health (Grants AI112417, AI120860, GM103368, AI076119, AI099284, and AI100890 (SGS), and GM066087 (OP)). The content is solely the responsibility of the authors and does not necessarily represent the official views of the funding agencies.