Using ultrasound waves, researchers from MIT and Massachusetts General Hospital (MGH) have found a way to enable ultra-rapid delivery of drugs to the gastrointestinal (GI) tract. This approach could make it easier to deliver drugs to patients suffering from GI disorders such as inflammatory bowel disease, ulcerative colitis, and Crohn’s disease, the researchers say.

Currently, such diseases are usually treated with drugs administered as an enema, which must be maintained in the colon for hours while the drug is absorbed. However, this can be difficult for patients who are suffering from diarrhea and incontinence. To overcome that, the researchers sought a way to stimulate more rapid drug absorption. 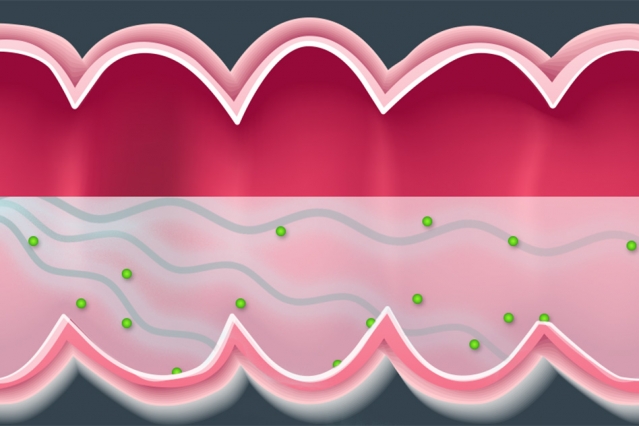 “We’re not changing how you administer the drug. What we are changing is the amount of time that the formulation needs to be there, because we’re accelerating how the drug enters the tissue,” says Giovanni Traverso, a research affiliate at MIT’s Koch Institute for Integrative Cancer Research, a gastroenterologist at MGH, and one of the senior authors of a paper describing the technique.

“With additional research, our technology could prove invaluable in both clinical and research settings, enabling improved therapies and expansion of research techniques applied to the GI tract. It demonstrates for the first time the active administration of drugs, including biologics, through the GI tract,” says Daniel Blankschtein, the Hermann P. Meissner Professor in Chemical Engineering, who is also a senior author of the paper.

Robert Langer, the David H. Koch Institute Professor at MIT and a member of the Koch Institute, is also a senior author of the paper. The study’s lead author is Carl Schoellhammer, a graduate student in chemical engineering.

Langer began exploring the possibility of using ultrasound to enhance drug delivery 30 years ago. In 1995, he and Blankschtein reported in Science that ultrasound could enable delivery of drugs through the skin, but until now it had not been explored in the GI tract.

“We've been working on ultrasound as a means to enhance transport through materials and skin since the mid-1980s, and I think the implications of this new approach have the potential to aid many patients,” Langer says.

Ultrasound improves drug delivery by a mechanism known as transient cavitation. When a fluid is exposed to sound waves, the waves induce the formation of tiny bubbles that implode and create microjets that can penetrate and push medication into tissue.

In this study, the researchers first tested their new approach in the pig GI tract, where they found that applying ultrasound greatly increased absorption of both insulin, a large protein, and mesalamine, a smaller molecule often used to treat colitis.

“Demonstrating delivery of molecules with a wide range of sizes, including active biologics, underscores the potentially broad areas in which this technology could be applied,” says Schoellhammer, who won the $15,000 Lemelson-MIT “Cure it!” Student Prize earlier this year for this research and for a microneedle pill that delivers drugs directly into GI tissue. The team also reached the finals of the MIT $100K Entrepreneurship Competition.

The researchers next investigated whether ultrasound-enhanced drug delivery could effectively treat disease in animals.

In tests of mice, the researchers found that they could resolve colitis symptoms by delivering mesalamine followed by one second of ultrasound every day for two weeks. Giving this treatment every other day also helped, but delivering the drug without ultrasound had no effect.

“The capabilities of the technology are quite well demonstrated. This technology has great utility in localized as well as systemic delivery of drugs,” says Samir Mitragotri, a professor of systems biology and bioengineering at the University of California at Santa Barbara. Mitragotri was also an author of the 1995 Science paper on ultrasound drug delivery but was not involved in the new research.

While inflammatory GI diseases are an obvious first target for this type of drug delivery, it could also be used to administer drugs for colon cancer or infections of the GI tract, Traverso says. The researchers are now performing additional animal studies to help them optimize the ultrasound device and prepare it for testing in human patients.