Scientists have revealed never-before-seen details of how the human brain sends rapid-fire messages between its cells.

Researchers at the School of Medicine and the Department of Energy’s SLAC National Accelerator Laboratory mapped the 3-D atomic structure of a two-part protein complex that controls the release of signalling chemicals, called neurotransmitters, from brain cells. Understanding how cells release those signals in less than one-thousandth of a second could help launch a new wave of research on drugs for treating brain disorders.

The experiments, at the Linac Coherent Light Source X-ray laser at SLAC, build upon decades of previous research at Stanford and the national lab. 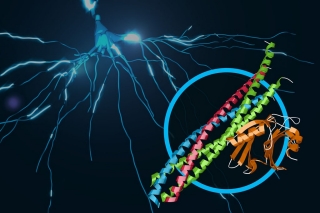 “This is a very important, exciting advance that may open up possibilities for targeting new drugs to control neurotransmitter release,” said Axel Brunger, PhD, professor and chair of molecular and cellular physiology and professor of neurology and neurological sciences. “Many mental disorders, including depression, schizophrenia and anxiety, affect neurotransmitter systems.” Brunger, who is also professor of photon science at SLAC and a Howard Hughes Medical Institute investigator, is the senior author of the paper. The first author is postdoctoral scholar Qiangjun Zhou, PhD.

“Both parts of this protein complex are essential,” Brunger added, “but until now it was unclear how its two pieces fit and work together.”

The two protein structures are known as neuronal SNAREs and synaptotagmin-1.

Earlier X-ray studies, including experiments at SLAC’s Stanford Synchrotron Radiation Lightsource, or SSRL, nearly two decades ago, shed light on the structure of the SNARE complex, a helical protein bundle found in yeasts and mammals. SNAREs play a key role in the brain’s chemical signaling by joining, or “fusing,” little packets of neurotransmitters to the outer edges of neurons, where they are released and then dock with chemical receptors in another neuron to trigger a response.

In this latest research, the scientists found that when the SNAREs and synaptotagmin-1 join up, they act as an amplifier for a slight increase in calcium concentration, triggering a gunshot-like release of neurotransmitters from one neuron to another. They also found that the proteins join together before they arrive at a neuron’s membrane, which helps to explain how they trigger brain signaling so rapidly.

“The neuron is not building the ‘gun’ as it sits there on the membrane — it’s already there,” Brunger said.

The team speculates that several of the joined protein complexes may group together and simultaneously interact with the same vesicle to efficiently trigger neurotransmitter release, an exciting area for further studies.

“The structure of the SNARE-synaptotagmin-1 complex is a milestone that the field has awaited for a long time, and it sets the framework for a better understanding of the system,” said James Rothman, a professor at Yale University who discovered the SNARE proteins and shared the 2013 Nobel Prize in Physiology or Medicine.

Thomas Südhof, MD, a Stanford professor of molecular and cellular physiology and HHMI investigator who shared that 2013 Nobel Prize with Rothman, discovered synaptotagmin-1 and showed that it plays an important role as a calcium sensor and calcium-dependent trigger for neurotransmitter release.

“The new structure has identified unanticipated interfaces between synaptotagmin-1 and the neuronal SNARE complex that change how we think about their interaction by revealing, in atomic detail, exactly where they bind together,” said Südhof, a co-author of the paper. “This is a new concept that goes much beyond previous general models of how synaptotagmin-1 functions.”

To study the joined protein structure, researchers in Brunger’s laboratory at the School of Medicine found a way to grow crystals of the complex. They used a robotic system developed at SSRL to study the crystals at the Linac Coherent Light Source, an X-ray laser that is one of the brightest sources of X-rays on the planet.

The researchers combined and analyzed hundreds of X-ray images from about 150 protein crystals to reveal the atomic-scale details of the joined structure.

“This experiment was the first to use this robotic platform at LCLS to determine a previously unsolved structure of a large, challenging multi-protein complex,” said Aina Cohen, PhD, co-head of the Structural Molecular Biology Division at SSRL, who oversaw the development of the highly automated platform used for the neuroscience experiment.

“This is a good example of how advanced tools, instruments and X-ray methods are providing us new insights into what are truly complex mechanisms,” added Cohen, a co-author of the study.

Brunger said future studies will explore other protein interactions relevant to neurotransmitter release. “What we studied is only a subset,” he said. “There are many other factors interacting with this system and we want to know what these look like. This by no means is the end of the story.”