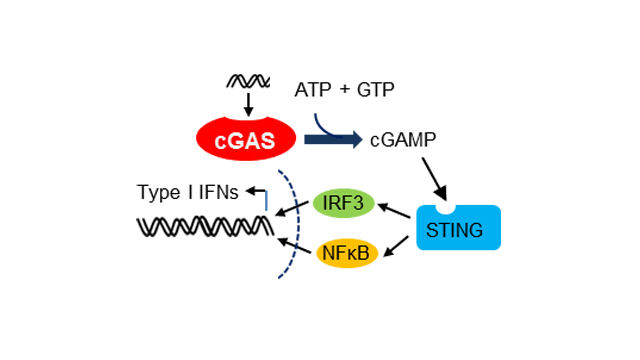 Activation of cGAS by cytoplasmic DNA or RNA initiates activation of the innate immune response via induction of Type I IFNs.

The National Institutes of General Medical Sciences (NGMS) has awarded a Phase I $288,000 Small Business Innovative Research (SBIR) grant to BellBrook Labs, LLC for the commercialization of an innovative high throughput screening (HTS) assay for detecting cyclic GMP-AMP(cGAMP) the product of the cGAMP synthase (cGAS) enzyme.

cGAS is a novel target shown to have implications in immuno-oncology and autoimmune diseases. As foreign DNA enters the cell, cGAS detects the DNA and produces cGAMP, which acts as an agonist for the STING (stimulator of interferon genes) receptor to induce a type I interferon response.  Researchers have shown that regulating cGAS activity could help control this immune response with therapeutic benefit for interferon-driven autoimmune diseases such as lupus.  Progress discovering small molecule cGAS modulators have been slowed by the lack of HTS-compatible assays.

BellBrook has leveraged its proprietary Transcreener® platform to directly measure cGAMP in a homogeneous immunoassay format with fluorescent readouts. Direct detection reduces the potential for interference in HTS and allows kinetic methods such as determination of residence times for more effective lead optimization early in discovery. The Transcreener cGAS Assay will enable screening of diverse small molecules for an emerging target in autoimmunity and immuno-oncology, accelerating discovery of first-in-class drugs for debilitating diseases. 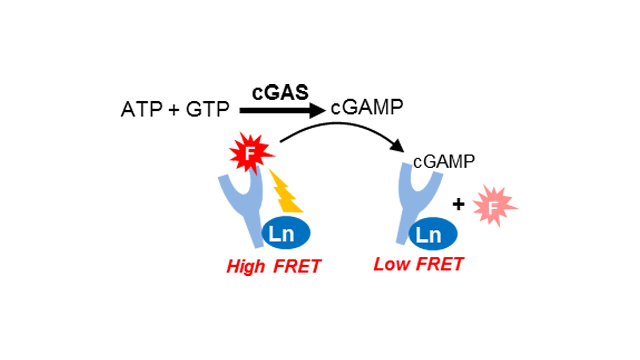 cGAS enzymatic assay based on homogenous TR-FRET immunoassay for cGAMP.