Förster resonance energy transfer (FRET) is a popular tool in biochemistry and molecular cell biology. Most FRET-based applications rely on hetero-FRET, energy transfer between two different fluorophores, a donor and an acceptor. However, there is a second, less known type of FRET, homo-FRET. Here, the energy transfer occurs between two identical fluorophores, provided they have an overlap between excitation and emission spectrum.
Since donor and acceptor are spectroscopically identical, spectral differences cannot be detected. Instead, differences in fluorescence polarization (FP) can be determined. A fluorophore excited by polarized light transfers its emission light to an identical fluorophore when found in close proximity. Upon FRET, the emission light gets depolarized. As a consequence, FP decreases with proximity of the identical fluorophores. This approach is called homoFRET-FP and can be used to analyze and quantify the formation of homodimers and oligomers of the same protein.
Till now, homo-FRET has been rarely used in high-throughput screening (HTS). It is preferred for studies of self-assembly, thanks to its comparatively easy fluorescent labelling as only one fluorescent probe is required. However, the need for only a single fluorescent probe, could pave the way for new multiplexed fluorescence analysis of protein interactions. It is hence foreseeable it will become more and more popular, also given the fact that FP detection is quite well established in HTS due to its sensitivity, homogeneity, and cost-effectiveness. A further advantage is the capability to monitor intracellular events in real time.

HomoFRET-FP can be easily quantified with a microplate reader. In particular, high sensitivity and low variability in FP detection is required in order to detect even small variations in homo-FRET-FP values.
A novel approach uses homoFRET-FP to identify drugs acting on insulin packaging in live cells. Aberrant insulin secretion is related to diseases such as diabetes and cancer. It is hence essential to find drugs that interfere with this secretory process. Upon release into the extracellular matrix, insulin molecules are tightly packed into granules. As this is a cellular process that needs to be recorded in a cellular background, common biochemical assays fail to record changes in packaging. However, granular hormone accumulation can be detected with homoFRET-FP.

Researchers at North Carolina Central University developed the homoFRET-FP-based assay to measure insulin packaging in cells (Yi NY et al., 2015). The group used rat insulinoma cells that expressed an mCherry-coupled pre-pro-insulin. Whereas discrete mCherry-insulin does not change the polarization of the emitted signal, insulin tightly packed into granules will transfer energy between mCherry molecules, leading to decreased FP (fig.1).
This assay can be easily validated by detecting FP on a PHERAstar® microplate reader from BMG LABTECH. Bafilomycin, a granule formation blocking drug, was used to modulate insulin packaging. Unperturbed cells exhibited low FP values, representing granules with densely packed insulin and accordingly high homoFRET. Bafilomycin increased dose-dependently the FP value due to loss of packaging (fig.2).
Further studies showed that this assay is suitable for HTS thanks to proper Z’ factors and to the possibility to automate and run the assay in 384 well formats. This allowed the identification of drugs acting on insulin processing out of 1,782 compounds (fig.3).
To reliably detect the small changes in FP originating from different packaging states, a microplate reader requires stable measurements. Thanks to its ability to simultaneously detect polarized and un-polarized emission light, the PHERAstar® FSX not only offers low data variation but also fast read times. The highly sensitive plate reader can be easily integrated into robotic systems and its software accelerates data analysis such as calculation of IC50 values. 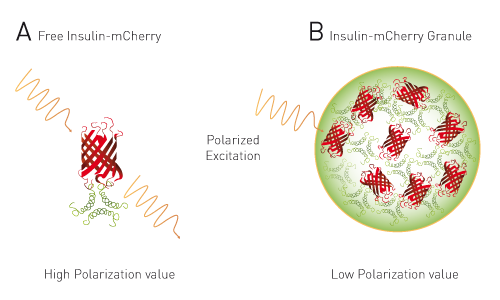 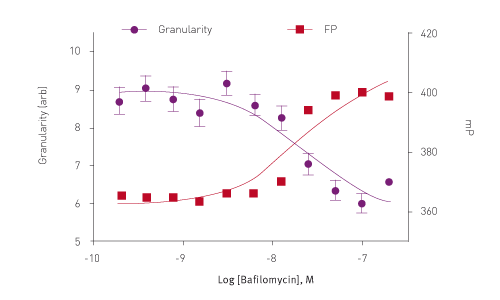 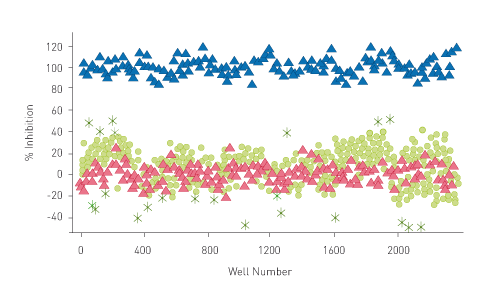