A SMRTer Way to Sequence DNA?

Ruairi is a senior science writer at Technology Networks. He holds a Master's degree in clinical neurosciences from the University of Cambridge and has written for Technology Networks since 2018.
Learn about our editorial policies
The Zero-Mode Waveguide. Source:PacBio

Complete the form below and we will email you a PDF version of "A SMRTer Way to Sequence DNA?"

Jonas Korlach is telling me a story.

It’s the story of how he helped develop Single Molecule Real Time (SMRT) sequencing, a technique which has become a staple of genomics, featuring in over 1400 publications in 2017 alone. Korlach, now the Chief Scientific Officer at Pacific Biosciences (PacBio), is adamant that SMRT is the way forward for sequencing research. How did Korlach take SMRT from an idea in a notebook to a fully-fledged genomic technology?

The story starts in 1997, at Cornell University. Korlach, then a first-year graduate student, had taken a course in biosynthesis and macromolecules under Jeff Roberts, now the Robert J. Appel Professor in Cornell’s Department of Molecular Biology and Genetics.

“The late '90s were a really exciting time in molecular biology,” says Korlach. “There were all these papers coming out about high resolution crystal structures, all of these macromolecular machines.

That was a revolution, because previously, it was all bands on a gel that we looked at during undergrad, and you had to indirectly infer to figure out how these enzymes worked. That was now replaced by pictures like this,” he says, pointing to the below image, a crystal structure of T7 DNA polymerase from a paper published twenty years ago. It’s definitely a step up from bands on a gel. 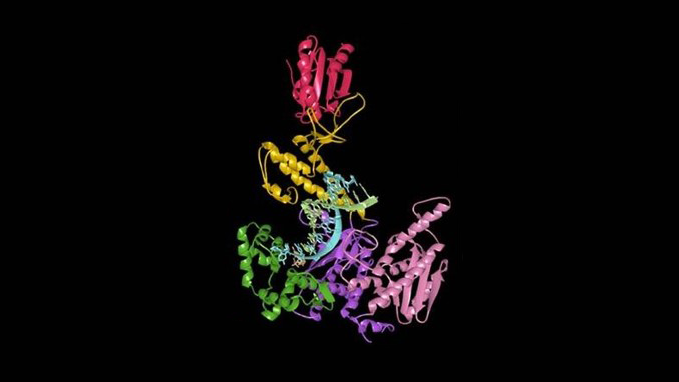 “It was just mind-blowing to me that we now had a really good understanding of the shape and geometry of these molecules.”

But molecules are not static, and even the most detailed image cannot give information about how molecules actually function in the cell; animations based on the crystal structures attempted to show the molecules’ movement, but the motion in these animations is all science fiction. Korlach believed research could aim for something better.

“I became interested in how it might be possible to look at these incredible macromolecular machines that carry out the basic processes that make life work, in real time, and try to figure out how these things actually moved in real time,” says Korlach.

He decided to begin by studying one of the most impressive “machines” in biology, the DNA polymerase molecule. DNA polymerase is tasked with replicating DNA molecules, using already existing molecules as templates. Giving that our DNA is the complete basis of our genetic code, polymerase has to be able to do this process with almost no room for error and at a simply incredible speed.

Korlach was amazed by the polymerase’s performance: “It's been evolved by evolution for hundreds of millions of years, it's extremely accurate, it's highly processive. It's clear that it can 'sequence', meaning replicate, all the bases in the genome, because otherwise we'd be in big trouble. It doesn't have any bias, it's very fast, and in your body this process goes at 1,000 bases per second. It's extremely frugal, it only needs one nucleotide to essentially decode what's on the other side through the GC/AT base pairing, and it's physically very small, so it potentially lends itself to a very high multiplex on a small footprint.”

Korlach concluded that if only you could see DNA polymerase doing its incredible, evolution-assisted work, then you could simply let the enzyme do the heavy lifting and take notes on its performance to create a top-quality sequencing technique.

At the time this was more pipe dream than practical plan. Available microscopes only had the strength to view a minimum of 500 molecules of polymerase, creating an incredibly messy signal which would obscure the actual sequencing process.

Luckily, Korlach was in good company. His PhD advisor was Watt Webb, the pioneering biophysicist who had already been widely renowned for his work in creating two other analysis techniques, Fluorescence Correlation Spectroscopy and Multiphoton Microscopy when Korlach joined his lab.  Webb helped Korlach start a conversation with Steve Turner, a graduate student in the neighboring lab of the world-leading nanofabrication expert Harold Craighead. Turner is now PacBio’s Chief Technology Officer. This started off a series of experiments that aimed to create a microscope that was, in effect, a thousand times more powerful than any currently available. The eventual product of a number of attempts was the zero-mode waveguide, the foundation of PacBio’s sequencing technology. 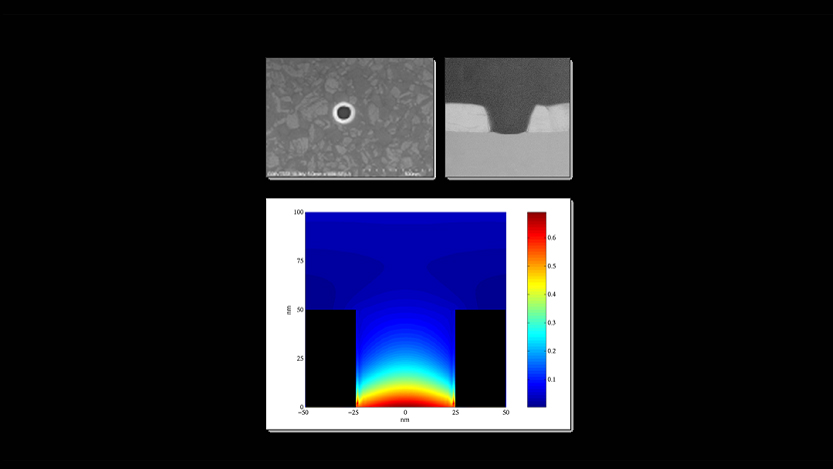 The Zero-Mode Waveguide (ZMW). Top and Side view of a single ZMW, and resulting volume confinement of laser illumination energy to the bottom of the ZMW nanostructure. Source: PacBio.

“The zero-mode waveguide is one of the simplest nanostructures that you can imagine,” says Korlach. He’s not that far off. The ZMW is, essentially, an unbelievably small hole in an aluminum metal sheet, just 150 nanometers in diameter. A human hair is roughly 75000 nanometers. It’s a really small hole.

But how does one (admittedly, really really tiny) hole make a viable microscope? Korlach suggests a rather excellent, if unexpected analogy; the kitchen microwave: “You know that your microwave oven door has a metal screen with holes in it? The purpose of that is so that you can look through into the inside of the microwave and see your food cook, but the metal screen prevents the microwave radiation coming out of the microwave and cooking you.” Microwaves are the beefy bouncers of the electromagnetic spectrum, with wavelengths in the centimeter range. Korlach explains that these chunky waves simply cannot fit through the small apertures in the oven screen door, and exponentially decay upon hitting it, whilst visible light, at a relatively slim 400-800 nm wavelength, can easily bounce from the inside of the microwave through the screen to your eyeballs, meaning you can quite happily pull up a chair and watch your dinner cook without being melted in the process.

Unfortunately, visible light is exactly what needs to be visualized with Korlach’s microscope, meaning a very small microwave door is required. The zero-mode waveguide is essentially that micro-microwave door. Within the ZMW, a molecule of DNA polymerase, alongside the template DNA that is to be sequenced, is adsorbed to the bottom of the base, and nucleotides with fluorescent molecules attached are released into the ZMW chamber.  Like our microwave door screen, the ZMW’s tiny aperture prevents light, shined up at the ZMW from below, from passing through. Instead, only the very bottom of the detection chamber is reached by the decaying light, meaning only the DNA polymerase molecule and whatever base that is currently attached to it can be illuminated and detected. This mean that the waveguide chamber can be full of nucleotides, but only those within a zeptoliter (10-21) volume are viewable. If the 4 bases that make up DNA can each be labelled with a different fluorescent color, then by reading the colored flash that appears when the fluorescent bases are hit by the light source, the corresponding base can be deciphered.

Problem solved? Not quite. The fluorescent tags Korlach had produced to visualize the bases fixed on to the base molecules in roughly the same position as the polymerase enzyme does, greatly reducing the efficiency of the sequencing process. Furthermore, the fluorescent tag would remain attached even after the polymerase had added on the base and moved onto the next nucleotide – quickly filling up the ZMW’s chamber with unwanted color.

This problem required an unorthodox solution, so what Korlach tells me next seem very fitting: “So the idea of a different type of nucleotide came to me in Santa Fe in an Indian restaurant.” Although Korlach didn’t literally write down the solution on a napkin, he quickly sketched an answer in his notebook: “I realized that another possibility of detection could be that the fluorophore is attached to the other end of the base molecule.” This new placement stopped the fluorescent tag from hindering the polymerization process, and also allowed the tag to float away after polymerization had occurred.

Korlach has made this all sound quite simple, but it’s quite clear that years of work have gone into perfecting the technique. PacBio have gone into quite simply exhaustive detail characterizing and tweaking their nucleotides, polymerases and fluorophores to produce a commercial product. PacBio’s latest product, the Sequel system, has a million of these potential sequencing sites, producing a lightshow of genomic data.

Of course, PacBio aren’t alone in the sequencing market, and Korlach seems really enthusiastic about the potential of his SMRT technology to compete with rival technologies. There are certainly plenty of researchers that agree with his assessment. SMRT sequencing has grown hugely in popularity in recent years and has been put to work in notable studies including high-profile descriptions of the ape and koala genomes and has even been used to poke holes in the much-lauded CRISPR gene editing technique.

Korlach believes the excitement around his technology comes down to its consistent performance across several sequencing parameters: “In sequencing, there are four different criteria that you want to look at whenever you evaluate any sequencing technology, really, and I've listed them here. You want to ask, “How long are the reads? How accurate are the reads? Is there any bias? And can the methods detect chemical modification?”

Fulfilling those criteria, says Korlach, has only been possible with the help of the polymerases he has spent decades studying: What we were initially hoping 20 years ago, and has now been realized, is that because of the properties of the DNA polymerase enzymes, we have provided the customer with the best possible performance in all four of those areas simultaneously”.

Complete the form below to unlock access to this Audio Article: "A SMRTer Way to Sequence DNA?"