Are Carbon Nanotubes a New Asbestos?

Complete the form below and we will email you a PDF version of "Are Carbon Nanotubes a New Asbestos?"

Carbon Nanotubes (CNTs) are used to make TVs, tennis rackets, sports cars and computer motherboards. Their high electrical conductivity is accompanied by thermal conductivity ten times that of copper and tensile strength one hundred times that of steel. Their potential applications span everything from textiles to solar panels and they have made normally staid academic journal articles overflow with superlative praise. They have been called a “wonder material”1.

But new research from the MRC’s Toxicology Unit has shown that carbon nanotubes (CNTs) can induce the fatal cancer mesothelioma in mice in exactly the same way as asbestos. This notorious mineral once enjoyed a prestige similar to CNTs but ultimately caused thousands of painful deaths before being banned in dozens of countries.

The study, which was published in Current Biology, raises urgent questions over the use of nanotubes in industry and science and the risk they may pose to workers and consumers alike.

Carbon Nanotubes: Many Uses, Many Risks

“What we highlight is that CNTs that are similar in shape and size to asbestos (i.e. long, thin and biopersistent) either need to be omitted from manufacture or if they are to be manufactured their use must be tightly regulated to protect both workers and consumers,” explains Professor Marion Macfarlane, senior author of the study.

Researchers introduced carbon nanotubes or asbestos fibres into the pleural cavity of mice, a method which had been previously shown to replicate the effects of inhaling CNTs2. This cavity is a fluid-filled space found beside the lining of the lungs (the pleura) which is the chief site of mesothelioma. They then monitored the mice for up to 20 months. When long asbestos or CNT fibres were introduced, cellular pathways that are pro-inflammation and cancer were activated, and damage to DNA was noted. Over three separate study groups, between 10% and 25% of animals exposed to the fibres went on to develop mesothelioma.

The study was carefully planned to best replicate the low-level, chronic exposure that proved fatal to workers in the asbestos industry. “We based our doses on the NIOSH (National Institute for Occupational Safety and Health) guidelines,” says Macfarlane. “For an average worker, a volume of 10 m3 of air would be inspired per 8-hour shift (40 hours per week week, 48 weeks/year), over 40 year working life-time. Based on [this], a worker exposed to 1 μg CNTs/m3 would inhale 96 mg of carbon nanotubes [over a working life-time]– well above the pleural exposure doses we used in mice [equivalent dose 3.137 mg].”

A New Cause of Mesothelioma?

Previous studies have tried to compare the biological effects of asbestos and CNTs but have often compromised their results by failing to accurately replicate the environment of humans who handled asbestos day-to-day. This new study followed mice over years rather than months, increasing relevance to a disease that progresses over a lifetime. “Our study is the first report where asbestos or CNT fibres are delivered directly into the pleura of [non-mutant] mice, enabling detailed analysis of CNT-induced disease development,” says Macfarlane. In addition to mesothelioma, researchers saw that CNTs could also irritate the pleura enough to produce scars on the lung walls, known as chronic fibrotic lesions, that in human mesothelioma patients lead to permanently shortened patients’ breath. These scars have been documented in workers at a manufacturing facility where inhalable CNTs were present3. 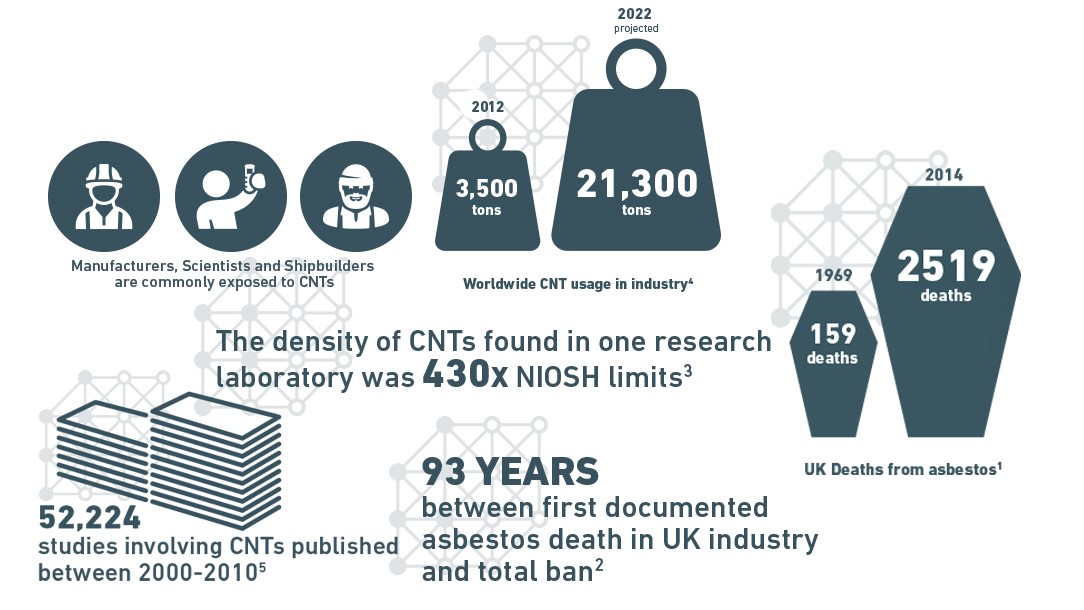 Asbestos, once widely used in manufacturing, has been banned in over 50 countries, although not in the US, where it is used in the production of roofing and fireproofing materials. The diseases caused by asbestos are insidious and develop slowly. Meaningful legislation to combat asbestos use was also slow to develop. The first laws against asbestos in the UK were laid down in 1930 but were so limited that asbestos use continued to be widespread in industry, despite knowledge of its potential health risks. More stringent laws were introduced in 1968, but no complete UK ban was implemented until 1999, after more than fifty years of head-in-the-sand policy decisions by lawmakers. In 1969, 159 people died from asbestos-induced mesothelioma. By 1999, that figure had skyrocketed to 1,615, and the number continues to rise, with 2,542 people dying in 2015 in the UK alone.
What makes Macfarlane’s research all the more concerning, is a similar pattern of failure to address scientific evidence of the danger posed by CNTs. A paper published 10 years ago in Nature Nanotechnology showed the similarity in the biological effects of asbestos and CNTs when the tiny tubes were introduced for a shorter time to the lining of the abdomen. Over that 10-year period meaningful legislative efforts on the use of CNTs have stood still whilst CNT production has increased at a breakneck speed. In 2012, 3,500 tons of CNTs were used in industry worldwide. By 2022, that figure is forecasted to be over 21,000 tons.
Thankfully, the team’s work is informing international regulation efforts, such as the Office for Economic Cooperation and Development’s Working Party on Manufactured Nanomaterials. Nevertheless, use of this “wonder” material shows no signs of stopping, and this research suggests that that approach risks a terrifying repeat of a slow-motion industrial disaster.
Do you work with carbon nanotubes or use them in your research? What safety measures do you use? Please contact us by emailing r.mackenzie@technologynetworks.com/
References
1. Lee Jeremy, & Ramakrishna Seeram. (2017). Carbon Nanotube Wires and Cables: Near‐Term Applications and Future Perspectives. Nanotechnology for Energy Sustainability. https://doi.org/10.1002/9783527696109.ch21
2. Mercer, R. R., Hubbs, A. F., Scabilloni, J. F., Wang, L., Battelli, L. A., Schwegler-Berry, D., … Porter, D. W. (2010). Distribution and persistence of pleural penetrations by multi-walled carbon nanotubes. Particle and Fibre Toxicology, 7, 28. https://doi.org/10.1186/1743-8977-7-28
3. Fatkhutdinova, L. M., Khaliullin, T. O., Vasil’yeva, O. L., Zalyalov, R. R., Mustafin, I. G., Kisin, E. R., … Shvedova, A. A. (2016). Fibrosis biomarkers in workers exposed to MWCNTs. Toxicology and Applied Pharmacology, 299, 125–131. https://doi.org/10.1016/j.taap.2016.02.016

Complete the form below to unlock access to this Audio Article: "Are Carbon Nanotubes a New Asbestos?"