Complete the form below and we will email you a PDF version of "Cell and Gene Therapy: Rewriting the Future of Medicine"

Cell and gene therapies seek to correct the root cause of an illness at the molecular level. These game-changing medicines are reshaping how we address previously untreatable illnesses – transforming people’s lives.

Cell and gene therapy represent overlapping fields of research with similar therapeutic goals – developing a treatment that can correct the underlying cause of a disease, often a rare inherited condition that can be life-threatening or debilitating and has limited treatment options.

“While these technologies were initially developed in the context of treating rare diseases caused by a single faulty gene, they have since evolved towards tackling more common diseases,” says Professor Rafael J. Yáñez-Muñoz, director of the Centre of Gene and Cell Therapy (CGCT) at Royal Holloway University of London.

A powerful example is the chimeric antigen receptor (CAR) T-cell therapies, which have been approved for treating certain blood cancers. The approach involves genetically modifying a patient’s T cells in the laboratory before reintroducing them into the body to fight their disease.

“For the first time, we had an example of gene therapy to treat a more common disease – demonstrating that the technology has wide applicability,” enthuses Yáñez-Muñoz.

To date, 24 cellular and gene therapy products have received approval from the US Food and Drug Administration (FDA) – including life-changing treatments for patients with rare diseases, such as inherited forms of blindness and neuromuscular conditions. A variety of gene and cell-based therapies for both rare and common diseases are also currently in development across many therapeutic areas, offering hope for many more families in coming years.

Cell and Gene Therapy - From Concept to Clinical Use

This webinar will provide an introduction to the regulatory framework for cell and gene therapies and highlight the importance of chemistry, manufacturing and controls. Watch to learn about regulatory concerns, safety and quality testing throughout the product lifecycle and key acronyms and terminology.

Gene therapies seek to introduce specific DNA sequences into a patient’s body to treat, prevent or potentially cure a disease. This may involve the delivery of a functional gene into cells to replace a gene that is missing or causing a problem – or other strategies using nucleic acid sequences (such as antisense oligonucleotides or short interfering RNAs [siRNAs]) to reduce, restore or modify gene expression. More recently, scientists are also developing genome-editing technologies that aim to change the cell’s DNA at precise locations to treat a specific disease.

The key step in successful gene therapy relies on the safe and efficient delivery of genetic material into the target cells, which is carried out by packaging it into a suitable delivery vehicle (or “vector”). Many current gene therapies employ modified viruses – based on adenoviruses, adeno-associated viruses (AAV), and lentiviruses – as vectors due to their intrinsic ability to enter cells. But non-viral delivery systems – such as lipid nanoparticles (LNPs) – have also been successfully employed to deliver RNA-based therapeutics into cells.

“A big advantage of using viral vectors for gene delivery is they are longer lasting than non-viral systems,” states Dr. Rajvinder Karda, lecturer in gene therapy at University College London. “Many of the rare diseases we’re aiming to tackle are severe – and we need to achieve long-term gene expression for these treatments to be effective.”

While improved technological prowess empowers the development of CRISPR-edited therapies, supply-chain and manufacturing hurdles still pose significant barriers to clinical and commercialization timelines. Watch this webinar to learn more about the state of CRISPR cell and gene therapies, challenges in CRISPR therapy manufacturing and a next-generation manufacturing facility.

Viral-vector gene therapies are either administered directly into the patient’s body (in vivo), or cells harvested from a patient are instead modified in the laboratory (ex vivo) and then reintroduced back into the body. Major challenges for in vivo gene delivery approaches are with the safe and efficient targeting of the therapeutic to the target cells and overcoming any potential immune responses to the vectors.

“As well as getting the genetic material into the affected cells, we also need to try and limit it reaching other cells – as expressing a gene in a cell where it’s not normally active could cause problems,” explains Dr. Gerry McLachlan, group leader at the Roslin Institute in Edinburgh.

For example, the liver was identified as a major site of toxicity for an AAV-based gene therapy approved for treating spinal muscular atrophy (SMA), a type of motor neuron disease that affects people from a very young age.

“Unfortunately, these viruses are leaky as they’re also going to organs that don’t need therapy – meaning you can get these off-target effects,” says Karda. “There’s still work to be done to develop and refine these technologies to make them more cell- and organ-specific.”

It is also important to ensure the gene is expressed at the right level in the affected cells – too high and it may cause side effects and too little may render the treatment ineffective. In a recent major advancement in the field, scientists developed a “dimmer switch” system – Xon – that enables gene expression to be precisely controlled through exposure to an orally delivered small molecule drug. This novel system offers an unprecedented opportunity to refine and tailor the application of gene therapies in humans. 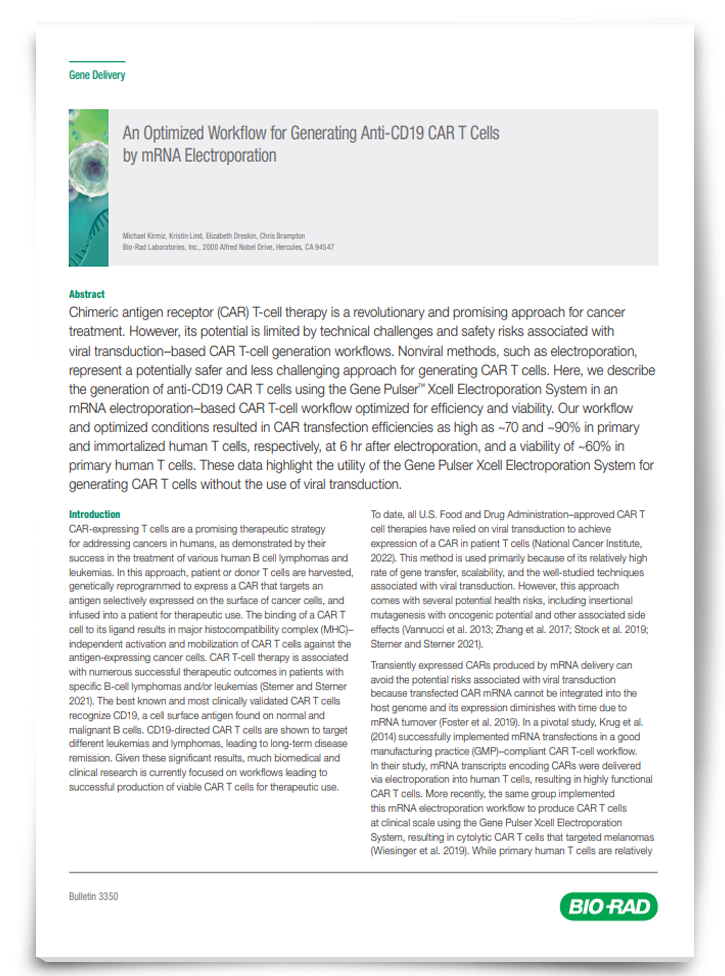 Download this whitepaper to discover an electroporation system that resulted in CAR transfection efficiencies as high as 70% in primary human T cells, can avoid the potential risks associated with viral transduction and is able to produce CAR T cells at a sufficient scale for clinical and therapeutic applications.

From gene to patient

In 1989, a team of researchers identified the gene that causes the chronic, life-limiting inherited disease cystic fibrosis (CF) – the cystic fibrosis transmembrane conductance regulator (CFTR). This was the first ever disease-causing gene to be discovered – marking a major milestone in the field of human genetics. In people with CF, mutations in the CFTR gene can result in no CTFR protein, or the protein being made incorrectly or at insufficient levels – all of which lead to a cascade of problems that affect the lungs and other organs.

What Can Droplet Digital™ PCR Do? 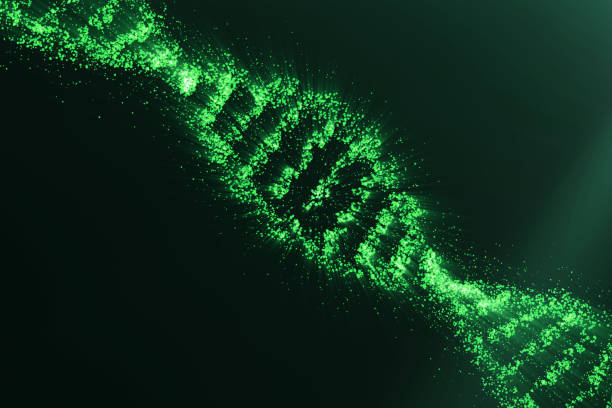 Watch this video to learn how ddPCR works with a broad range of in-process or final product samples, provides absolute quantification and reproducible results and offers low cross-reactivity and low false positive rates.

“While this was encouraging, the effects were modest – and we need to develop a more potent delivery vehicle,” explains McLachlan. “We’ve also been working on a viral-based gene therapy – using a lentiviral vector to introduce a healthy copy of the CTFR gene into cells of the lung.”

Karda’s team focuses on developing novel gene therapy and gene-editing treatments for incurable genetic diseases affecting the central and peripheral nervous system – and Yáñez-Muñoz is aiming to develop new treatments for rare neurodegenerative diseases that affect children, including SMA and ataxia telangiectasia (AT).

But a significant barrier for academic researchers around the world is accessing the dedicated resources, facilities and expertise required to scale up and work towards the clinical development and eventually the commercial production of gene and cell therapies. These challenges will need to be addressed and overcome if these important advancements are to successfully deliver their potentially life-changing benefits to patients. 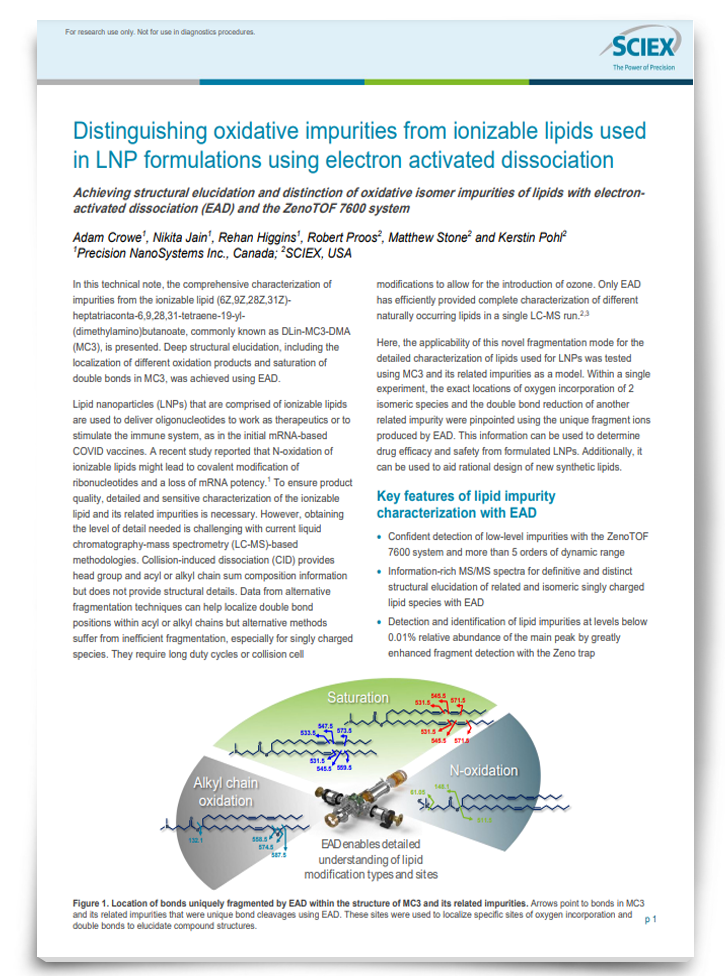 After many decades of effort, the future of gene and cell therapies is incredibly promising. A flurry of recent successes has led to the approval of several life-changing treatments for patients – and many more products are in development.

“It’s no longer just about hope, but now it’s a reality – with a growing number of rare diseases that can be effectively treated with these therapies,” describes Yáñez-Muñoz. “We now need to think about how we can scale up these technologies to address the thousands of rare diseases that exist – and even within these diseases, people will have different mutations, which will complicate matters even further.”

But as more of these gene and cell-based therapies are approved, there is a growing urgency to address the challenge of equitable access to these innovative treatments around the world.

“Gene therapies have the dubious honor of being the most expensive treatments ever – and this isn’t sustainable in the longer term,” says Yáñez-Muñoz. “Just imagine being a parent and knowing there is an effective therapy but your child can’t access it – that would be absolutely devastating.”

Complete the form below to unlock access to this Audio Article: "Cell and Gene Therapy: Rewriting the Future of Medicine"