Complete the form below to unlock access to this Audio Article: "Exploring the Latest in CRISPR and Stem Cell Research"

Since the gene-editing potential of CRISPR systems was realized in 2013, they have been utilized in laboratories across the world for a wide variety of applications. When this gene-editing power is harnessed with the proliferative potential of stem cells, scientists level up their understanding of cell biology, human genetics and the future potential of medicine.

Thus far, the feasibility to edit stem cells using CRISPR technology has been demonstrated in two key areas: modeling and investigating human cell states and human diseases, and regenerative medicine.1 However, this has not been without challenges.

In this article, we explore some of the latest research in these spaces and the approaches that scientists are adopting to overcome these challenges.

Deploying CRISPR technology in iPSCs has been notoriously challenging, as Martin Kampmann, of the Kampmann lab at the University of California San Francisco, says: "CRISPR introduces DNA breaks, which can be toxic for iPSCs, since these cells have a highly active DNA damage response." To overcome the issue of toxicity, as a postdoc in the lab of Professor Jonathan Weissman, Kampmann co-invented a tool known as CRISPR interference (CRISPRi), where the DNA cutting ability of CRISPR/Cas9 is disabled.2 The "dead" Cas9 (or, dCas9) is still recruited to DNA as directed by a single guide RNA. It can therefore operate as a recruitment platform to target protein domains of interest to specific places in the genome.

CRISPRi permits gene repression at the transcription level, as opposed to RNAi which controls genes at the mRNA level. This allows researchers to repress certain genes within stem cells and decipher their function. Kampmann explains: "For CRISPRi, we target a transcriptional repressor domain (the KRAB domain) to the transcription start site of genes to repress their expression. This knockdown approach is highly effective and lacks the notorious off-target effects of RNAi-based gene knockdown."

In a study published just last month, Kampmann's laboratory adopted a CRISPRi-based platform to conduct genetic screens in human neurons derived from iPSCs: "CRISPR-based genetic screens can reveal mechanisms by which these mutations cause cellular defects, and uncover cellular pathways we can target to correct those defects. Such pathways are potential therapeutic targets."3 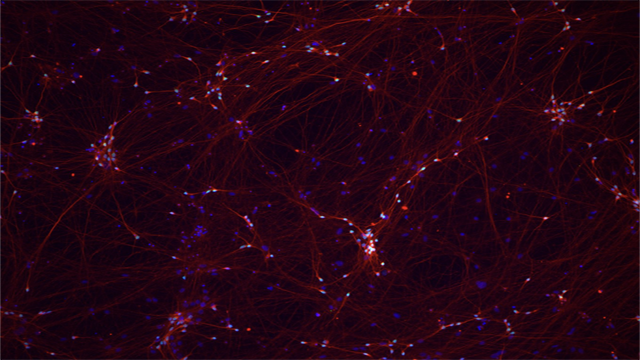 Previous CRISPR-based screens have focused on cancer cell lines or stem cells rather than healthy human cells, thus limiting potential insights into the cell-type-specific roles of human genes. The researchers opted to screen in iPSC-derived neurons as genomic screens have revealed mechanisms of selective vulnerability in neurodegenerative diseases, and convergent mechanisms in neuropsychiatric disorders.

The large-scale CRISPRi screen uncovered genes that were essential for both neurons and iPSCs yet caused different transcriptomic phenotypes when knocked down. "For me, one of the most exciting findings was the broadly expressed genes that we think of as housekeeping genes had different functions in iPSCs versus neurons. This may explain why mutations in housekeeping genes can affect different cell types and tissues in the body in very different ways," says Kampmann. For example, knockdown of the E1 ubiquitin activating enzyme, UBA1, resulted in neuron-specific induction of a large number of genes, including endoplasmic reticulum chaperone HSPA5 and HSP90B1.

These results suggest that comprised UBA1 triggers a proteotoxic stress response in neurons but not iPSCs – aligning with the suggested role of UBA1 in several neurodegenerative diseases. The authors note: "Parallel genetic screens across the full gamut of human cell types may systematically uncover context-specific roles of human genes, leading to a deeper mechanistic understanding of how they control human biology and disease."

Several laboratories across the globe are in an apparent race to develop the first clinically relevant, efficacious and safe cell-based therapy utilizing CRISPR gene-editing technology.

Whilst a plethora of literature demonstrates the efficacy of CRISPR in editing the genome of mammalian cells in vitro, for in vivo application, particularly in humans, rigorous long-term testing of safety outcomes is required. This month, researchers from the laboratory of Hongkui Deng, a Professor at Peking University in Beijing, published a paper in The New England Journal of Medicine.4 The paper outlined their world-first study in which they transplanted allogenic CRISPR-edited stem cells into a human patient with HIV.

The rationale for the study stems back to the "Berlin patient", referring to Timothy Ray Brown who is one of very few individuals in the world that has been cured of HIV. Brown received a bone marrow transplant from an individual that carries a mutant form of the CCR5 gene. Under normal conditions, the CCR5 gene encodes a receptor on the surface of white blood cells. This receptor effectively provides a passageway for the HIV to enter cells. In individuals with two copies of the CCR5 mutation, the receptor is distorted and restricts strains of HIV from entering cells.

Deng and colleagues used CRISPR to genetically edit donor hematopoietic stem and progenitor cells (HSPCs) to carry either a CCR5 insertion or deletion. They were able to achieve this with an efficiency of 17.8%, indicated by genetic sequencing. The CRISPR-edited HSPCs were then transplanted into an HIV patient who also had leukaemia and required a bone-marrow transplant, with the goal being to eradicate HIV.

"The study was designed to assess the safety and feasibility of the transplantation of CRISPR–Cas9–modified HSPCs into HIV-1–positive patients with hematologic cancer," Deng says. He continues: "The success of genome editing in human hematopoietic stem and progenitor cells was evaluated in three aspects including editing persistence, specificity and efficiency in long-term engrafting HSPCs." Long-term monitoring of the HIV patient found that, 19 months after transplantation, the CRISPR-edited stem cells were alive – however, they only comprised five to eight percent of total stem cells. Thus, the patient is still infected with HIV.

Despite the seemingly low efficiency in long-term survival, the researchers were encouraged by the results from the safety assessment aspect of the study: "Previously reported hematopoietic stem and progenitor cells-based gene therapies were less effective because of random integration of exogenous DNA into the genome, which sometimes induced acute immune responses or neoplasia," Deng says. "The apparent absence of clinical adverse events from gene editing and off-target effects in this study provides preliminary support for the safety of this gene-editing approach."

"To further clarify the anti-HIV effect of CCR5-ablated HSPCs, it will be essential to increase the gene-editing efficiency of our CRISPR–Cas9 system and improve the transplantation protocol," says Deng.

The marrying of CRISPR gene-editing and stem cell research isn't just bolstering therapeutic developments in HIV. An ongoing clinical trial is evaluating the safety and efficacy of autologous CRISPR-Cas9 modified CD34+ HSPCs for the treatment of transfusion-dependent β-thalassemia, a genetic blood disorder that causes hemoglobin deficiency.

The therapeutic approach – known as CTX001 – involves extracting a patient’s HSPCs and using CRISPR-Cas9 to modify the cells at the erythroid lineage-specific enhancer of the BCL11A gene. The genetically modified cells are then infused back into the patient's body, where they produce large numbers of red blood cells that contain fetal hemoglobin. Currently no results are available, but reports confirm that participants have been recruited on to the trial.

Our understanding of cell biology and diseased states has been majorly enhanced by the combined use of CRISPR technology and stem cells. Whilst this article has focused on current study examples, Zhang et al.'s recent review provides a comprehensive view of the field and insights provided by earlier studies.5

In such review, the authors comment "Undoubtedly, the CRISPR/Cas9 genome-editing system has revolutionarily changed the fundamental and translational stem cell research." Solutions are still required to resolve the notorious off-target effects of CRISPR technology, to improve the editing efficiency as outlined by Deng and to exploit novel delivery strategies that are safe for clinical stem cell studies.

Nonetheless, the future looks bright for CRISPR and stemcell-based research. In their review published this month, Bukhari and Müller say, "We expect CRISPR technology to be increasingly used in iPSC-derived organoids: protein function(subcellular localization, cell type specific expression, cleavage, and degradation) can be studied in developing as well as adult organoids under their native conditions."