Monitoring changes in the viral genome is continuing to play a crucial role in shaping the response to the COVID-19 pandemic.

The COVID-19 pandemic has caused over 4.5 million deaths worldwide, with more than 200 million people having been infected with the novel coronavirus, SARS-CoV-2. Since the virus first emerged in China in December 2019, the analysis of genetic sequencing data from millions of positive samples has revealed how the virus has evolved.

“Changes in the SARS-CoV-2 genome occur at a rate of around one or two mutations per month,” says Dr. Alessandro Carabelli, Research Associate at COG-UK, University of Cambridge, UK.

Most mutations have little or no effect on the biology of SARS-CoV-2 and persist in the descendants of that virus – providing useful “tags” for tracking its spread.

“By understanding viral transmission pathways within a certain setting, such as a workplace or prison, this can help inform decisions on what actions are needed to contain an outbreak,” says Patricia Brennan, director of Science Product Management at Chan Zuckerberg Initiative, San Francisco, USA.

But some mutations can alter the biological behavior of SARS-CoV-2, such as improved transmissibility or ability to evade the immune system. Detecting and tracking the emergence of these changes is vital as they may threaten the performance of vaccines, therapies, diagnostic tools or other public health and social measures.

In January 2020, the first SARS-CoV-2 genome sequence was made available, enabling its classification as a coronavirus and providing fine-scale detail on its genetic content and organization. The virus has four main structural proteins: the spike protein, membrane protein, envelope protein and nucleocapsid protein.

“Access to SARS-CoV-2 sequence data has since influenced vaccine design by providing a basis for the selection of genes as vaccine targets and has supported the development of molecular diagnostic tests for COVID-19,” says Carabelli.

While coronaviruses, like SARS-CoV-2, have evolved some proofreading mechanisms to maintain their genomes, random errors can still occur.

“As mutations accumulate, this leads to numerous differences in the virus population over time,” explains Carabelli.

But some mutations can change the behavior of the virus – and these will persist if they confer an advantage, such as altering its ability to cause disease or transmit from one person to another. Changes that occur in the gene encoding the spike protein are of particular interest, as it is involved in the virus entering human cells – and is the target for most COVID-19 vaccines.

“A concern is that mutations may arise that lead to lower vaccine efficacy,” says Carabelli. “The most numerically important mutation to date is the spike protein variant D614G, which was not present when the virus first emerged but is now almost ubiquitous.” 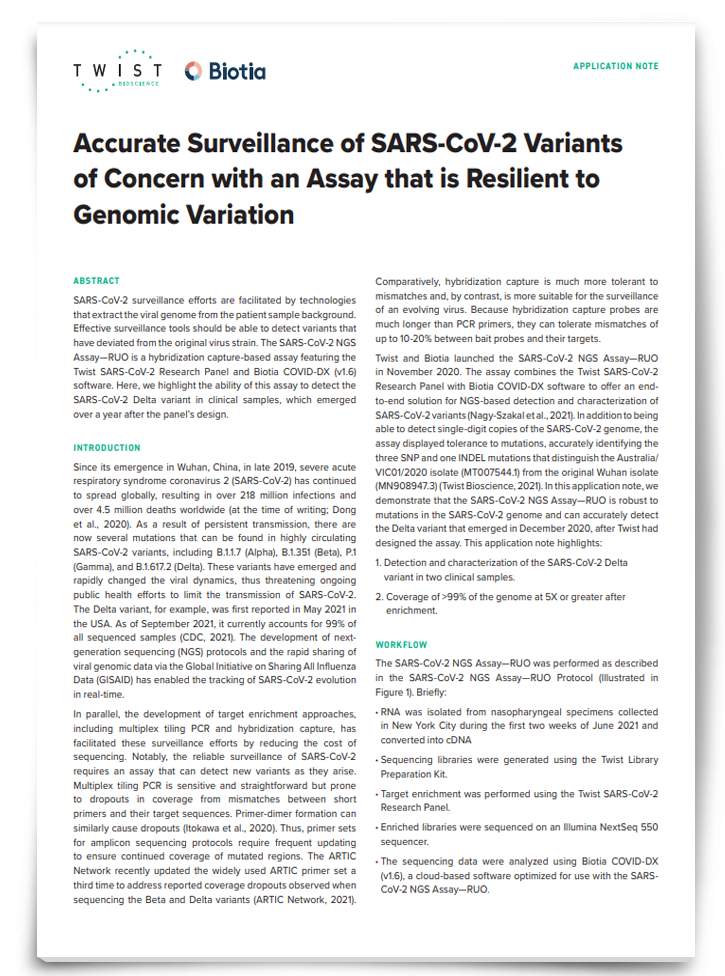 As a result of persistent transmission, there are now several mutational variants of SARS-CoV-2. These variants have emerged and rapidly changed the viral dynamics, thus threatening ongoing public health efforts to limit the transmission of SARS-CoV-2. Download this app note to discover a surveillance assay that will remain effective as new variants emerge while offering high sensitivity and capture efficiency.

Since the beginning of the pandemic, researchers around the world have generated and shared SARS-CoV-2 genome sequences at an unprecedented rate. Internationally, these are deposited on an open-access platform called GISAID – which now contains more than 3.5 million viral genomes. This allows for the analysis and tracking of any variant – which are classified by the set of mutations that they contain – arising around the world.

“New variants are detected either because they present mutations in their genomes that we know are dangerous or because they grow faster than other variants,” explains Carabelli.

The World Health Organization (WHO) has so far classified four SARS-CoV-2 variants as “Variants of Concern”, or VOC – which have mutations that provide the virus with advantageous properties, such as increased transmissibility or virulence.

The first VOC, B.1.17, or “alpha”, was first detected in the UK in September 2020, followed shortly after by B.1.351 (beta), P.1 (gamma) and B.1.617.2 (delta), which were first detected in South Africa, Brazil and India, respectively. All these new variants are more transmissible than the original virus identified in Wuhan, making them spread faster – and have some degree of immune evasion.

“New variants will continue to emerge, and it is important we understand the phenotypes of emerging variants in terms of infectivity, transmissibility and antigenicity as soon as possible,” says Carabelli.

A major concern is that the effectiveness of COVID-19 vaccines may be impacted by the emergence of SARS-CoV-2 variants – which could become increasingly problematic as the virus continues to spread, increasing its chance to further evolve.

Global efforts to monitor the evolution of the virus will need to continue to identify any changes that could impact the long-term effectiveness of ongoing vaccination programs.

“Tracking mutations in the virus is an essential surveillance partner to vaccine roll-out – and it likely to be needed for as long as the vaccine is required,” states Carabelli.

COVID-19 vaccines might have to be periodically updated to reflect any changes in the virus.

“What’s great about many of the latest technologies used to develop COVID-19 vaccines – such as mRNA vaccines – is that they can be updated quickly to target those emerging variants,” says Ayscue.

Where Do We Go From Here: A Reflection of COVID-19 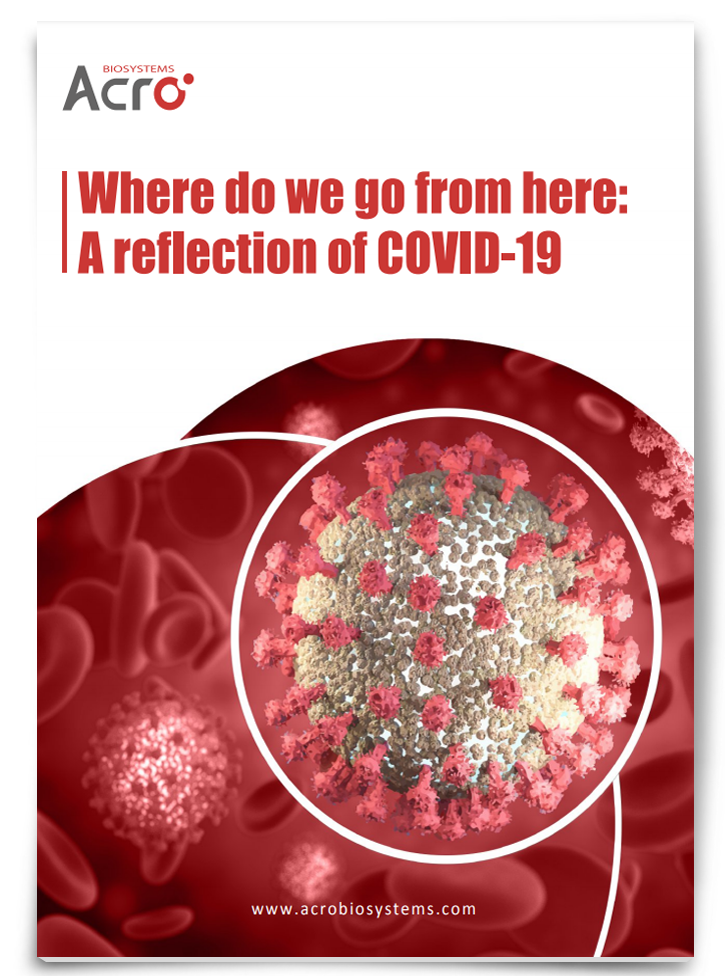 In less than two years, much has been discovered about SARS-CoV-2 and its variants, and to date several vaccines have been created. Capitalizing on several decades of progress on new vaccine technologies, viral immunology, structural biology and protein engineering research, along with clinical trial operations, seven vaccines have undergone the process of rapid development, evaluation, manufacturing and deployment. Download this app note to explore various solutions designed to improve COVID-19 detection and the development of vaccines and therapeutics.

Genomic surveillance has also proved a useful tool for determining how a virus is spreading through communities or populations. Comparing viruses from different people can give extra granularity to outbreak investigations, enabling rapid decision-making on the most effective infection control measures.

“Genomic data is great for understanding transmission pathways – it can tease out whether a cluster of infections is associated with people getting infected within that setting or bringing it in from outside,” explains Ayscue. “It’s essentially giving you breadcrumbs to follow those mutations and work out where viral transmission is happening – providing the evidence to inform what measures are needed to disrupt it.”

But the COVID-19 pandemic has exposed huge disparities in the current capacity of public health systems to perform genomic surveillance of circulating pathogens – both at a national and international level.

“Public health systems are extremely fragmented in many countries, including the US,” says Brennan. “This means that the frontline work is often being done by people who don’t have the necessary skills and infrastructure to carry out these analyses.”

The development of an open-source free software tool, called Aspen, is one step towards democratizing the technology – enabling individual public health laboratories to conduct genomic analyses and interpret the data independently.

“People can load their data and do the analysis so they can see where the mutations have occurred,” says Brennan. “They can look at those in terms of the population they came from – and work out where they need to take action.”

Sequencing the SARS-CoV-2 genome has been a crucial driver in shaping the response to the current pandemic, from understanding transmission pathways to tracking viral evolution.

“Genomic surveillance and the use of pathogen genomes on this scale to track the spread of the virus, study local outbreaks and inform public health policy signifies a new age in virus genomic investigations,” says Carabelli.

The global community will need to work together to put the necessary infrastructure in place to be ready for future pandemics.

“If COVID-19 has taught us anything, it’s that borders and boundaries don’t exist as long as people are moving around,” says Brennan. “We need to get the tools that researchers have developed to places where they can be applied and used more readily – as a society, I hope we can tend to that more diligently than we have in the last many decades.”
Related Topics
The COVID-19 Pandemic
Infectious Diseases
The Immune System
Next-Generation Sequencing
Meet the Author