Molly Campbell is a senior science writer at Technology Networks. She holds a first-class honors degree in neuroscience. In 2021 Molly was shortlisted for the Women in Journalism Georgina Henry Award.
Learn about our editorial policies
Credit: Josiah Zayner.
Read time:

Complete the form below and we will email you a PDF version of "Meet Josiah Zayner, the Biohacker Next Door"

Josiah Zayner, PhD, is considered by many as fairly "unconventional" in his scientific practice. A former NASA research fellow turned biohacker, he is perhaps most renowned for, in his own words, being "the guy who ate s**t" (referring to his undertaking of a DIY fecal transplant), or for injecting himself with the gene-editing technology CRISPR.

Zayner has opted to pursue his biohacking endeavors in the public eye, documenting his experimental successes and failures on his personal blog, Science, Art and Beauty. Now, he is the CEO and founder of The ODIN, a business selling DIY gene-editing kits from his garage in Oakland, California.

I was interested to speak with Zayner to learn more about the Biohacking movement, of which he is regarded a "leader", and to gain his perspective on the ethical controversies surrounding his work. 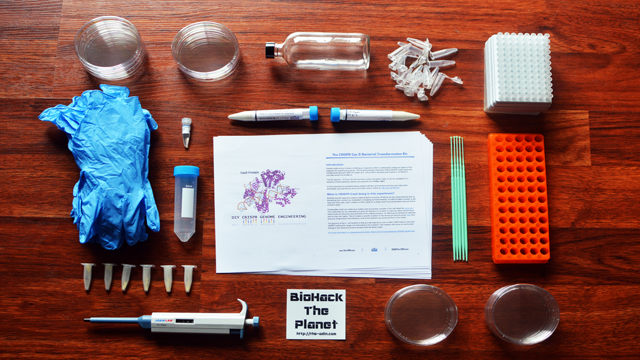 A quick Google search of "biohacking" returns loose definitions and various articles discussing self-enhancement by means of ultra-violet ray exposure and drinking "raw" water. I wanted to know what being a biohacker means to Zayner: "A biohacker is just somebody who's trying to do science outside of a traditional environment. It's just people who are looking to learn how to do, you know, biology, genetic engineering physics not in a university or a large commercial research lab."

Zayner walked away from a position as a Research Scientist at NASA in their Synthetic Biology Program, where he worked on genetically engineering organisms to help with space travel, in 2016. When I asked why he made the decision to abandon "traditional" science, he told me: "The whole system is set up to encourage people to do research that nobody really cares about. The science that we all really want, things like invisibility cloaks and lightsabers and spaceships – that stuff doesn't really get worked on. Instead we get people who study how fruit flies have sex and stuff like that. I think that really needs to change."

Reinforcing this point, Zayner emphasizes that himself and others could "contribute to science and humanity more if we just had the freedom to work on what we wanted to work on." Recognizing that one barrier to such freedom is the way biohackers are perceived by the scientific community and general public, Zayner comments: "It's really hard. It becomes difficult to have any sort of nuanced opinion, right? You're either some crazy guy or you're somebody whose very rational, there's no in between." He adds: "To really move science forward, I think that we need people who have a combination of knowledge and a little bit of crazy. They're going to be the people willing to take the risks."

Speaking of risks, Zayner famously injected himself with the CRISPR gene-editing technology in front of a live-audience. "I injected myself and I measured, you know, like the circumference of my arm to see if it had increased, and I also did some genetic tests to see if I could detect any changes in my DNA. I didn’t see any growth in my arm, and the test to detect changes in my DNA was inconclusive."

Zayner assures me that the primary goal of the experiment was not to give himself bigger muscles or change his DNA. "The goal of the experiment was outlined in the video I posted. I didn't really expect the experiment to work and my goal wasn't to grow bigger muscles. It was to show that there are hospitals or companies doing gene therapy that can cost $2.1 million, whereas I can order the equipment online really easily and inject myself with it. It's literally just injecting people with DNA, or a virus that has DNA. That's it. It's that simple."

"In the beginning, you don't know what you don't know. But then once you start playing and learning and using, you start to have an intuition for what things can go wrong. In order for me to really understand human gene therapy, the only way to do that was by doing it."

The ODIN offers an array of DIY kits allowing consumers to genetically engineer frogs, brew fluorescent beer with jellyfish DNA and conduct other related experiments from the comfort of their own home. Whilst they are unusual, Zayner assures me that there is certainly a demand for such products: "We started running genetic engineering classes that are online where we ship people the materials, and we teach them. We've had over 300 people pay $400 to take these classes, so people really want this stuff." 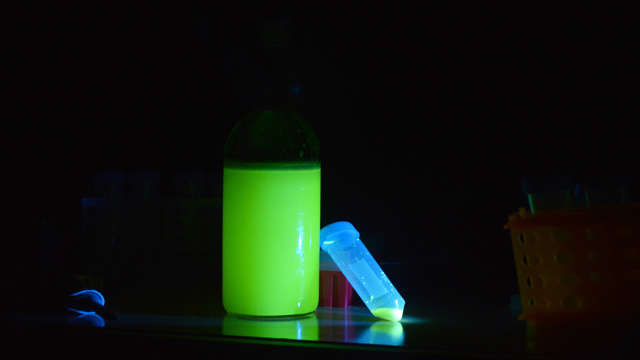 "You have two approaches to this. You have the approach of where you can make the technology with lots of investment in the system, and then try to make it available to people through subsidies and other things. Or you could start at the bottom, teach everybody how to use the technology, and then the technology becomes available from the start. There's never a question of "well, is everybody going to have access to it?", yeah everybody's going to have access to it, because everybody knows how to make it themselves from scratch."

When I question Zayner on his motivations for starting the ODIN, he is quick to dismiss my suggestion that he is democratizing gene-editing: "I don't like the word democratization. I think it can be used in a lot of strange contexts. I think what we like to say is we're making it accessible to people." He continues: "We're just making this technology accessible on the most basic level. We constantly are sending kits to places like Nepal, and African countries like Senegal, and Nigeria, and we ship out kits in the US to low income areas. We think everybody should have access to this technology. I think that's kind of what sets it apart from everything else."

So, Zayner is looking to make gene-editing technology available to all, regardless of socioeconomic background or previous scientific experience, through The ODIN.

Is this legal? Or ethical?

"In the US, Canada, Mexico, China, and even the UK I think they're all pretty open in regard to these things," Zayner comments. "Countries like Germany, Austria, and other places can be really harsh. In Germany, if you actually genetically modify an organism and it's not in a state sanctioned lab, you can go to jail."

Adding his personal opinion on the matter, he says: "It's crazy. But generally, no [in response to the question of whether there are laws surrounding gene-editing at home] and I think that's good, because it's really hard to do something harmful accidentally or even on purpose. I don't think these things should be regulated in any significant way, and there is a huge demand for this type of stuff."

The unusual nature of his scientific experiments means Zayner has acquired a large global audience, including both fellow biohackers in the community, the general public and also the health authorities. Zayner informs me that he is frequently asked to attend meetings and conferences to discuss his endeavors with gene-editing and biohacking, but often turns down the invitations. "I usually don't say anything, because it's not worth my time and effort," Zayner continues.

"I think that in life, we should all be doers. We shouldn't be people who sit there and have meetings. I know meetings are important, but, everybody always invites me to talk about these things. And I never go because why talk about it? It's happening. We're living in it. The only thing we can do, is do. Right? You have a choice, do or talk," Zayner concludes.

Getting high with gene therapy

When I ask Zayner what his favorite biohacking experiment has been thus far, he tells me that each experiment has its own beauty, making it difficult to select a single one that has been a highlight: "Whenever I have a new experiment, I just become more and more excited about it. It just adds so many layers of complexity to what is already out there."

He alludes to an "exciting" novel experiment in our conversation, and so I dig a little deeper. The outcome? I learn that he plans to “get high” using his own DNA.

"I started to pursue the idea of creating a gene therapy that gets you high. Our body naturally produces endorphins. And endorphins are just these small protein peptides that are made from DNA. So theoretically, you could encode endorphins in DNA, and inject yourself with the DNA and get high."

Before I can ask the question myself, Zayner informs me of the legal implications associated with utilizing your own genetic material to get "high". "There's no way that government could outlaw it, because you can't detect specific DNA. Nobody would ever be able to have DNA sniffing dogs or anything like that."

However, he is quick to emphasize that, as was the case with the CRISPR experiment, people should not be quick to assume or judge his motivations, "The reason for doing it is not to get high. The experiment would basically create something that would change the government's stance on a lot of things. I think it would be a very interesting social and political statement on top of just being a really interesting experiment in general, seeing if it's possible and doing rigorous tests on my blood and stuff."

To conclude our interview, I am interested to hear Zayner's insights on the "weird and wonderful" places that gene-editing could take us to in the near future.

"I just think of the possibilities and I'm like, wow. I wonder about what's going to happen when somebody genetically engineers a dragon or something like that, and everybody wants one as a pet.” 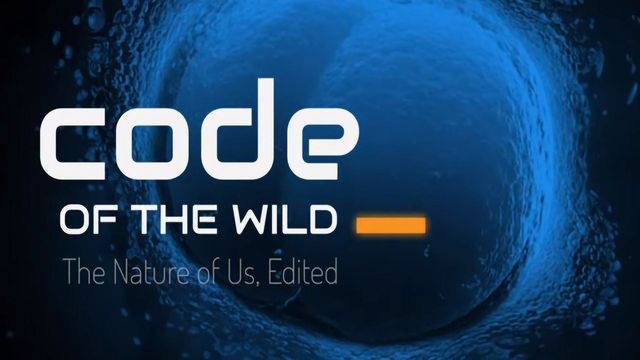 Code of the Wild: A Documentary Film Exploring the Genome Editing Revolution

END_OF_DOCUMENT_TOKEN_TO_BE_REPLACED

Zayner continues: “Then, they have dragon factories where people manufacture dragons. It sounds crazy, but these things are totally possible. It's just the right place, the right time and the right people wanting something."

Is now the right time? Following the controversial genetic editing of two human embryos by Jianku Hei, a global conversation regarding gene editing is currently taking place. Whilst authorities face pressures to enforce ethical frameworks, scientists are in the race to reproduce He's work, but "better".

After my conversation with Zayner, I can't help but wonder what influence the biohacking community will have on the future of gene-editing. Is this a futuristic movement that will significantly alter our approach to research and the availability of scientific technology, or rather, a "quirky" hobby that some "unconventional" scientists choose to pursue?

Disclaimer: The views, thoughts, and opinions expressed within the article belong solely to the interviewee. Technology Networks do not endorse or promote the purchase of DIY gene-editing products from the ODIN.