Molly Campbell is a senior science writer at Technology Networks. She holds a first-class honors degree in neuroscience. In 2021 Molly was shortlisted for the Women in Journalism Georgina Henry Award.
Learn about our editorial policies
Credit: NASA Johnson Space Center.

Twin studies are invaluable to the field of genomics. Monozygotic (identical) twins share the exact the same DNA, permitting the study of how the environment we live in and the lifestyle choices we make may impact our genetic code. If, say for example, one twin decided to emigrate to a different country, perhaps with a warmer climate, and adopted the local cuisine, scientists would be able to look at the effects of these lifestyle changes on the genome compared to the twin that had not moved and stayed in their original environment.

One twin in space, one twin on earth

But what if rather than moving to another country, one twin moved to space? In a unique landmark study, identical male twins Scott and Mark Kelly - both (now retired) NASA astronauts – spent one year apart as Scott travelled to and inhabited the International Space Station (ISS), whilst Mark stayed at home on earth.

The study has provided 84 scientists from 12 institutions (including Johns Hopkins University, Stanford University, UT Health San Antonio's Center for Renal Precision Medicine and the University of California) a rare opportunity to gain insight into the impact of long-term space travel on various physiological aspects of the human body. NASA recently announced that the Lunar Orbital Platform-Gateway a solar-powered space station that will act as a communications hub, science laboratory, short-term habitation module, and holding area for rovers and robots, may have inhabitants as early as 2024. Contributing to work already completed by the NASA Human Research Program in developing procedures to lessen the effects of the space environment on the health and performance of humans, this study is therefore pertinent. 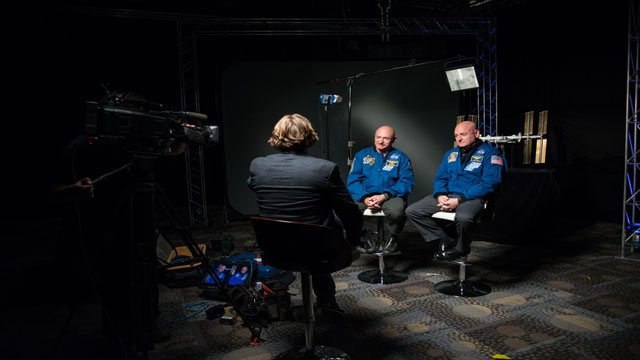 The logistics of a "multi-omics" space study

The NASA twin study is an integrated multiomics, molecular, physiological and behavioural analysis of the changes that the human body incurs in a yearlong space mission. Starting in 2015, the study involved researchers collecting blood samples and physiological and cognitive measurements from both twins at several time points over a 27-month period – including before, during, and after Scott was onboard the ISS.

If you have ever struggled to obtain samples from research subjects on earth, you can appreciate the complexity of this study from a logistical perspective. Are you ready to be impressed? The equipment required for taking Scott's samples was sent to the ISS via a Soyuz rocket, samples were taken, and then shipped back to Earth for processing in a mere 48-hours.

The dawn of human genomics in space

To extract data from the samples, scientists from the various institutions involved focused on individual physiological areas. Andrew Feinberg of Johns Hopkins University, and former postdoctoral student Lindsay Rizzardi, were interested in the epigenetic impact of space travel.

Epigenetics refers to the study of heritable changes to an individual's gene expression that do not result from changes to the DNA sequence. Epigenetic changes often involve genes being "turned off" or "silenced" and can be temporary or long lasting in effect. Feinberg and team looked at two types of white blood cells, CD4+ and CD8+, in the twins' blood samples to observe any signs of DNA methylation. They found that overall there was less than five percent differences in methylation levels between Mark and Scott's blood across the course of the study, suggesting that roughly an equal number of epigenetic changes occurred on earth as in space. The highest difference in methylation levels between Mark and Scott's samples occurred when Scott was nine months into the mission, when 79 % of Scott's DNA was methylated, compared to 83 % of Mark's.

The researchers did note that the location of methylation differed across the twins' genome. Whilst Scott was travelling in space, methylation changes occurred near genes implicated in the immune response that were not observed in Mark on earth. More than 90 % of genes that did change activity level during Scott's time in space returned to normal levels just six months after returning to Earth; however, the scientists are quick to add that this is not indifferent to what might occur normally regardless of space travel.

"It was encouraging to see that there was no massive disruption of the epigenome in either Mark or Scott," Rizzardi comments, before adding that the sample size is a slight limitation to the research: "With only two people in the study, we're limited in the conclusions we can draw about the effect of space travel on the genome. But the findings give us clues to what we should examine more closely in future studies of astronauts."

Telomeres tell the story of aging in space

If you've seen the movie Interstellar, you might wonder whether Scott returned to Earth somehow physiologically "younger" than his twin Mark. You're not alone in questioning this - scientists from the University of Colorado focused on changes to the lengths of telomeres, the protective "caps" at the end of chromosomes, in the twins' white blood cells. The length of our telomeres represents our biological age rather than our chronological age, and thus changes in their length are associated with disease and aging.

Susan Bailey, a Professor at the University of Colorado found the results "striking". Preliminary data released in 2017 showed that Scott's telomeres elongated whilst in space. Whilst most of these telomeres returned to near pre-flight averages upon his return to earth, Scott now has more short telomeres than he did prior to his jaunt in space. "Having shorter telomeres puts a person at higher risk for accelerated aging" notes Bailey. "This also increases the risk for diseases that come along with aging, including cardiovascular disease and some cancers".

Bailey's telomere research will continue in NASA's One-Year Mission Project in which she will study 10 astronauts on a one-year mission, 10 on a six-month mission, and 10 on trips of two to three months in duration.

Analysis of the twins' blood samples revealed that Scott had increased levels of the metabolite lactate during his time on the ISS, which returned to baseline levels upon his return to Earth. As lactate is directly connected to mitochondrial function, this excited Darshi and Sharma.

In situations where mitochondria are unable to produce the energy required for cellular functions, cells adopt a different fuel generating process, glycolysis, where glucose is metabolized and lactate is produced. "Elevated lactate could potentially mean your mitochondria are not functioning normally," Sharma notes. "As part of this study, other groups have evaluated mitochondrial function and mitochondrial gene expression, and the data supported our findings."

Whilst the precise reason for Scott's increase in lactate levels remain elusive, the researchers hope that subsequent studies involving mouse models that have also travelled to space will shed more light.

Taking "multi-omics" to the final frontier of personalized medicine

The NASA Twin Study has utilized the expertise of researchers from a multitude of disciplines and adds to the growing number of "multi-omics" research studies we are seeing in the scientific literature. Sharma says, "This is exactly what precision medicine is about. At an individual level, what can we measure and learn in a specific context? In this case, it happened to be a spaceflight. But it could be somebody taking medication for diabetes or starting an exercise regimen or beginning a new dietary plan."

Feinberg adds that this study paves the way for further predictions about the physiological impact of long-term space travel: "If we know what to expect, we can anticipate health problems astronauts may encounter and ensure that medicines and other remedies are at hand during a mission."

Complete the form below to unlock access to this Audio Article: "NASA Identical Twin Study Takes Our Understanding of Space Travel to the Final Frontier"