As soon as CRISPR-Cas9 genome editing technology was available, scientists worldwide started using it to learn more about genetic diseases and to develop what promises to be a new class of gene therapy. CRISPR-Cas9 was more precise, easy-to-use and affordable than any previous genome editing technology, such as zinc-finger nucleases and transcription activator-like effector nucleases. It was no wonder that biomedical researchers became particularly interested in developing it for clinical application.

Indeed, clinical trials have begun of therapies applying CRISPR-Cas9 to correct single gene mutations to treat diseases such as sickle cell disease and beta-thalassemia. These therapies so far apply the genome editing ex vivo, meaning that the editing is performed on the patient’s cells outside of the patient. Hemopoietic stem/progenitor cells are extracted from the patient’s blood, edited using CRISPR-Cas9, then returned to the patient, in much the same way as stem cells are transplanted into patients with diseases like leukemia. However, therapies are being developed that will use in vivo CRISPR gene editing, which will be performed within the patient. Another inevitability is the shift of focus from monogenic (single-gene) disorders to polygenic (multiple-gene) ones.

But what about more common diseases, like cancer? Although not an immediately intuitive leap, cancer is a multifactorial disease that incorporates a variation of genetic influence. Although not fully deterministic for the development of cancer, certain genes – such as the BRCA1 gene, are well known to be implicated and to significantly raise a person’s cancer risk. Why is it then, that we have not heard more about CRISPR-Cas9 being developed for cancer therapies?

A major hindrance has been the low efficiency of genome editing of tumor cells and the potential toxicity of existing delivery systems. The large size of the Cas9 enzyme (160 kD, 4300 bases) and the single guide RNA (sgRNA; ~31 kD, 130 bases) makes their delivery difficult using conventional viral and nonviral methods. This is borne out by the relatively low gene editing efficiency achieved with CRISPR-Cas9 using current delivery methods for non-liver tissues and tumors. If CRISPR-Cas9 is to succeed in cancer therapies, higher editing efficiencies would need to be reached consistently.

One way of achieving this is to adopt an alternative delivery system. One such option is that of lipid nanoparticles (LNPs), which have already been used to successfully deliver nucleic acids in clinically approved therapies and in vaccines (e.g., coronavirus mRNA vaccines). LNPs are lipid-based nanoparticles, comprised mainly of cationic ionizable lipids, cholesterol and other helper lipids. They are capable of delivering large, payloads unlike adeno-associated viruses (AAVs), which have most often been employed for in vivo CRISPR-Cas9 studies (see Figure 1). AAVs are also unable to target specific cells, prone to initiating immune responses, and hepatotoxic at high doses. Although other delivery systems have been explored for clinical applications of CRISPR, they remain limited by safety concerns and low editing efficiency. 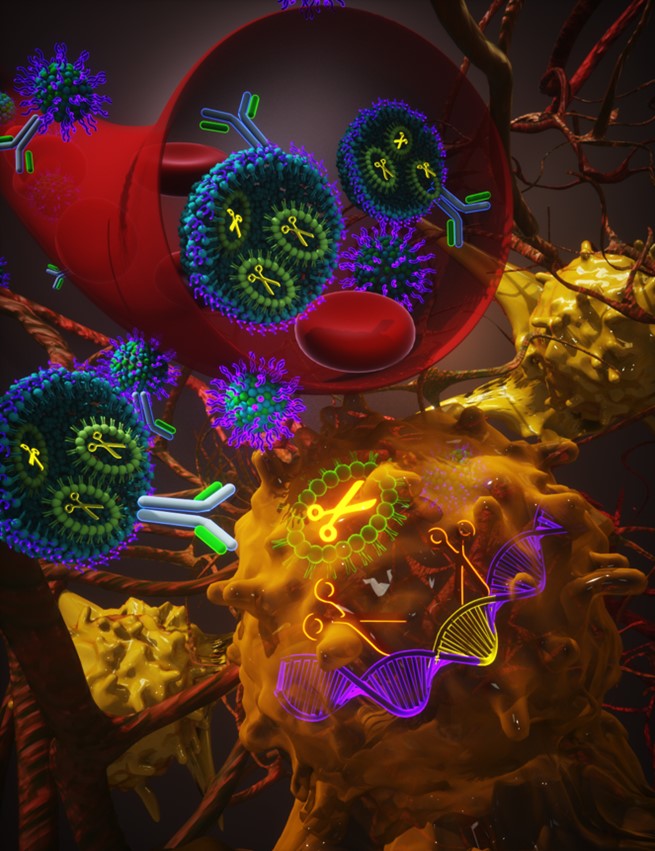 Figure 1: Systemic delivery of mRNA that encodes for Cas9 protein and sgRNA delivered in targeted LNPs. Picture Credit: Ella Maru Studio.
Recently, a targeted non-viral LNP delivery system has been developed for therapeutic genome editing. This involved multiple hurdles, which were overcome with bespoke solutions. For example, early experiments were unsuccessful because the sgRNA did not last long enough in the cells for the messenger RNA (mRNA) to be translated during the gene editing.

Researchers at Tel Aviv University collaborated with industry to generate a more stable sgRNA and resolve this issue.

This sgRNA improved editing efficiencies to a remarkable level, reaching 95 – 98% in vitro in all cell types tested, and depending on the animal model, 70–80% in vivo.1 Once the sgRNA was stable enough to be delivered together with the Cas9 RNA, the LNPs had to be re-designed to be able to encapsulate both RNAs – a larger payload than had previously been achieved. The new LNPs were designed using a novel class of amino lipids, created specifically for the project and thus, generating a novel library of amino lipid constructs. These LNPs were able to encapsulate both the Cas9 RNA and sgRNA, and the CRISPR LNP system was successfully evaluated during research in two models of aggressive and incurable cancer.1

To establish proof of concept, CRISPR LNPs (cLNPs) targeting the PLK1 gene were tested in culture cells.1 The PLK1 protein is a kinase enzyme required for mitotic cell division. Eradicating PLK1 leads to cell cycle arrest and cell death in dividing cells. Treatment of the cultured cells with the sgPLK1-cLNPs resulted in cell cycle arrest 48 hours after treatment and a five-fold drop in cell viability. The control CRISPR LNPs targeted green fluorescent protein (GFP), a non-essential reporter protein in the cells. Treatment with the sgGFP-cLNPs did not affect the viability of cells, indicating that the cLNPs had low toxicity at therapeutic levels.

To confirm  whether the in vitro findings translated in vivo, two animal models of aggressive and incurable cancer were employed. The first was a mouse model of glioblastoma, the most aggressive type of cancer that begins within the brain. Glioblastoma is an almost uniformly fatal cancer in humans, being highly invasive, neovascularized, pleomorphic, and infiltrated by immune cells. To treat the murine brain tumors, a single dose of sgPLK1-cLNPs was injected intracerebrally into the tumor bed. This facilitated ~70% editing in the PLK1 gene in the tumor cells, which killed the cancer cells (via apoptosis), and resulted in 30% improved survival and 50% tumor growth inhibition. The survival benefit is the highest reported for this aggressive tumor after a single treatment.

The second model was a mouse model of disseminated intraperitoneal ovarian cancer. In humans, this type of cancer is typically of high-grade, metastatic and resistant to chemotherapy. To treat disseminated tumors, which are hard to reach, the sgPLK1-cLNPs are targeted to the tumor cells using antibodies against a protein that is specifically and highly expressed by the tumor cells. In the case of the murine ovarian tumors, the antibodies were targeted to epidermal growth factor receptor (EGFR). Single doses of the antibody-targeted sgPLK1-cLNPs were injected intraperitoneally into the mice. The sgPLK1-cLNPs were found to have accumulated in the tumors, demonstrating the specificity of the treatment to the tumor cells. The treatment facilitated ~80% editing in the PLK1 gene in the tumor cells, which strongly inhibited tumor growth, and resulted in an 80% increase in overall survival.

In both models, the safety evaluations showed that the cLNPs were not toxic or immunogenic and that the editing was limited to the tumor cells. The in vivo safety of cLNPs was also assessed in a dedicated study, which demonstrated no hepatotoxicity – according to clinical signs and liver enzyme levels, and no immunogenicity – according to a plasma cytokine panel assay. Together with the efficacy data, these results indicate that CRISPR-Cas9 technology is able to disrupt gene expression in vivo in tumors. This opens up new avenues for cancer research and treatment, especially for aggressive and incurable tumors. Moreover, the cLNP system does not need to be restricted to potentially researching the treatment of cancer but could also potentially be applied for the targeted gene editing of non-cancerous tissues to treat other common, complex and multifactorial diseases.

Dr Mark Behlke, MD, PhD, is chief scientific officer at Integrated DNA Technologies (IDT) and is an internationally recognized expert in the field of nucleic acid technologies and an inventor cited on more than 50 US Patents. In nearly 25 years at IDT, Mark has overseen research programs and new product development in the areas of DNA thermodynamics, gene synthesis, probe chemistry, qPCR, NGS, antisense, RNA interference, and CRISPR genome editing. Mark joined IDT as an R&D consultant in 1995 and was named VP R&D in 1996. He was promoted to CSO in 2013.