Molly Campbell is a senior science writer at Technology Networks. She holds a first-class honors degree in neuroscience. In 2021 Molly was shortlisted for the Women in Journalism Georgina Henry Award.
Learn about our editorial policies
Credit: Jerald Pinson, Florida Museum of Natural History.

Complete the form below and we will email you a PDF version of " Sequencing Life on Earth, One Eukaryote at a Time"

The Human Genome Project, an international and collaborative research effort to sequence the entire human genome, was completed in 2003, two years ahead of schedule. It marked the birth of the “genomic era”, a period in which next-generation sequencing technologies (NGS) would dramatically increase in capability and speed, while reducing in cost.

Almost 20 years after the HGP was completed, the impact of the genomic era is visible across modern-day society and scientific research. Genomic sequencing is now integral to agricultural research, personalized medicine, studying the history of humanity and most recently in navigating our response to the COVID-19 pandemic.

Fifteen years after the HGP’s completion, scientists set their sights on a new goal: The Earth BioGenome Project (EBP). Described as a “moonshot” project for biology, it aims to sequence, catalog and characterize the genomes of the 1.8 million named species of plants, animals and fungi – and single-celled eukaryotes – on Earth, in 10 years.

“The idea for the EBP was hatched by me, Professor Gene Robinson and Professor John Kress in 2015,” Harris Lewin, the Robert and Rosabel Osborne endowed chair and distinguished professor of evolution and ecology at the University of California Davis, explains in an interview with Technology Networks. “The main motivating factor was that we were all running into roadblocks in our research because of the lack of high-quality genome sequences from eukaryotic species.”

Why is the EBP necessary?

The trio held an exploratory meeting at The Smithsonian Institution in 2015, attended by some of the world’s most renowned genome scientists and representatives from major US funding agencies, to investigate the project’s feasibility.

The meeting concluded that a global initiative, like the EBP, is imperative for preserving biodiversity and sustaining human society, and it must happen now. Lewin explains: “The threats to the world’s biodiversity, ecosystems, agriculture and energy supplies due to climate change, habitat destruction and other anthropogenic factors are now of paramount importance.”

The amount of biodiversity on Earth is declining rapidly – this is known as the biodiversity crisis. Some scientists argue that conserving biodiversity presents as an even greater challenge than addressing climate change.

According to the United Nations, the average abundance of native species in land-based habitats has declined by >20% since 1900. Over 40% of amphibian species, 33% of reef-forming corals and over one third of all marine mammals are threatened. At least 680 vertebrate species have become extinct since the 16th century, and over 9% of domesticated breeds of mammals utilized for food and agriculture were extinct by 2016.

Prior to the project’s onset, just 0.6% of known eukaryotes had sequenced genomes. As such, the basic knowledge and biological infrastructure to address these global issues is lacking. An easy-to-access DNA library for all eukaryotic life would greatly aid conservation efforts across the globe, Lewin says: “Conservation genomics is a relatively new discipline that generates and utilizes genomic information from threatened and endangered species for the purpose of conservation. Understanding the genomic diversity of remaining populations aids the development of species management plans.” He notes the California Conservation Genomics Project as a prime example of such a management plan.

The birth of the EBP

Over the next two years, a series of meetings followed the initial discussion at The Smithsonian Institution – including the first international conference on biodiversity genomics in 2017 – and a plan for sequencing all eukaryotes was developed. In the summer of 2018, a manifesto for the EBP was published in the Proceedings of the National Academies of Sciences (PNAS) journal. Shortly after, the project officially launched at the Wellcome Trust in London in the fall.

The manifesto outlines key performance indicators and strict time frames for the EBP. “We must lay the foundation for the future by completing this project in 10 years, as we have proposed, before it is too late to save genomic information for up to 50% of earth’s biodiversity that may be lost during the ongoing sixth mass extinction of life on earth,” says Lewin. 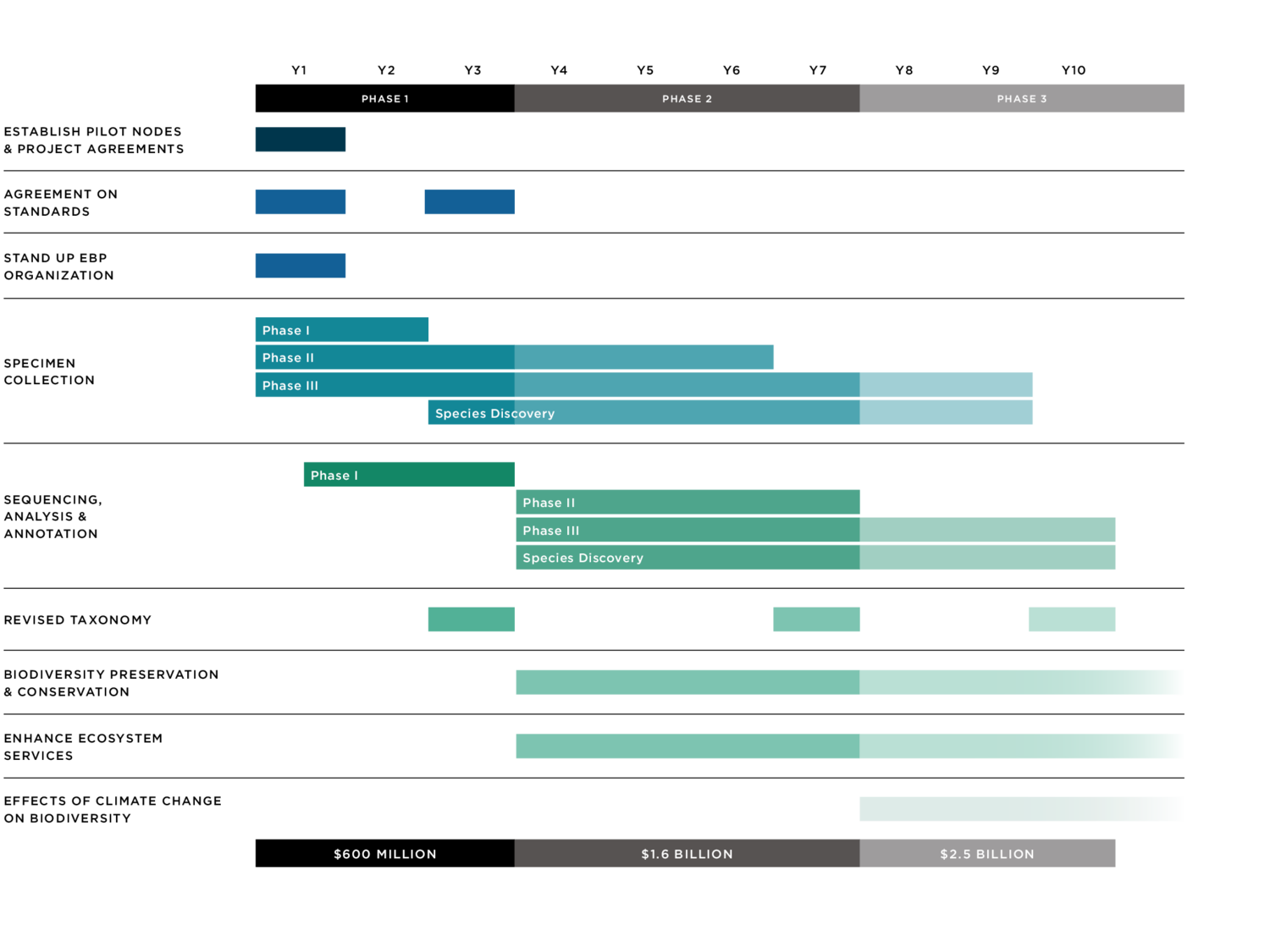 The manifesto also outlines the EBP’s logic for sequencing every species – as opposed to one representative member of each family or genus. The leadership behind the EBP argue that sampling one species per genus or family would not provide a realistic assessment of the evolutionary complexity of such groups. “While recognizing that it may not be feasible to obtain samples for every species, pragmatism does not negate the primary scientific and societal need for trying to do so,” the manifesto reads.

The EBP officially launched at the Wellcome Trust in London in the fall of 2018. From 2018 to 2020, the project was in a “startup” phase, whereby focus was placed on developing standards, strategies, organizing cross-regional and national translational projects and building communities.

“The EBP will revolutionize the field of evolution and will have major impacts on agriculture, medicine and environmental sciences,” – Harris Lewin.

The EBP consists of an international “network of networks” where it sits as the overarching core for other “megaprojects” such as the Darwin Tree of Life. To date, 43 institutions and 49 affiliated projects are working on the eukaryotic taxa, and individual scientists are participating in multiple projects. Harris explains: “We count about 5000 scientists in 100 countries that are now participating in EBP activities. This global community is actively engaged in all aspects of the project, from collecting samples, generating and assembling genomes and analyzing the data.” He anticipates that many of the collaborations born through the networks will continue far beyond the sequencing of the last genome.

In January 2022, the EBP announced it had entered a new phase, transitioning from pilot projects to full-scale production sequencing. The statement was accompanied by a series of papers published in PNAS outlining some of the project’s key achievements thus far.

Why sequence all eukaryotes?

Green plant genomes: What we know in an era of rapidly expanding opportunities

EBP-Colombia and the bioeconomy: Genomics in the service of biodiversity conservation and sustainable development

The wealth of data generated will be made open-access, Lewin emphasizes: “To be a member of the EBP, each institution and project must commit to free and open access of the data and are required to put the raw data and genome assemblies into public databases, such as GenBank.” Members must also commit to complying with the Convention on Biodiversity, a multilateral treaty with three goals: conservation of biological diversity, sustainable use of its components and the fair and equitable sharing of benefits that arise from genetic resources.

The goal for the current stage – Phase I – is to create reference genomes for ~9,400 taxonomic families, of which 200 have already been produced. It is expected that by the end of 2022, over 3,000 sequences will be complete. Lewin is confident that the EBP’s progress over the years to come will “revolutionize” the study of evolution, having “major impacts on agriculture, medicine and environmental sciences,” he concludes.

﻿This article featured in issue 12 of The Scientific Observer, Technology Networks' monthly magazine. To download your copy of this issue, click the link below. 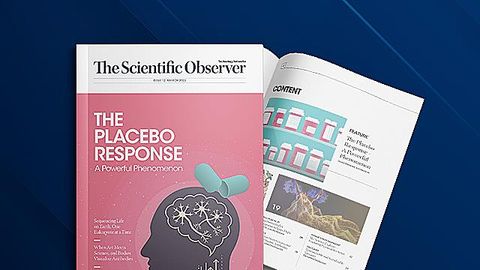 END_OF_DOCUMENT_TOKEN_TO_BE_REPLACED

Complete the form below to unlock access to this Audio Article: " Sequencing Life on Earth, One Eukaryote at a Time"