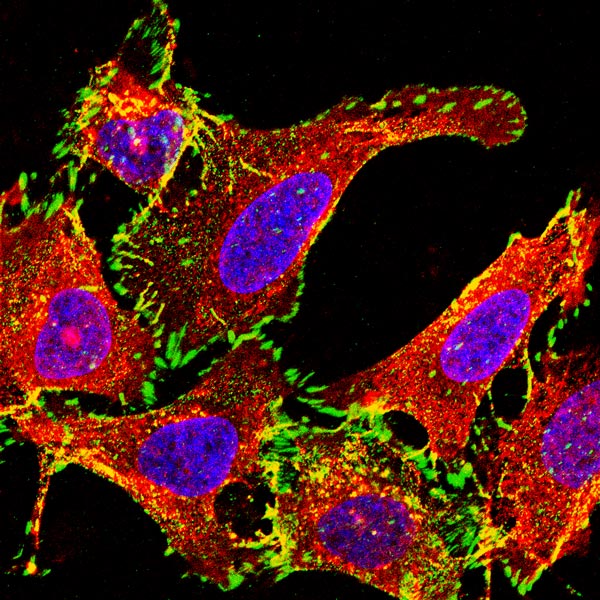 Photo of A549 (ATCC® CCL-185™) by Christopher Chin, Massachusetts General Hospital. This cell line is the first product of ATCC's CRISPR/Cas9 efforts.

The CRISPR/Cas9 system – often abbreviated to “CRISPR" – has been the most significant development in genome editing in years. The two components of CRISPR/Cas9 are a “homing” mechanism consisting of guide RNA sequences and Cas9, an endonuclease. The guide RNA directs CRISPR/Cas9 to a precise location on the target organism’s genome, where Cas9 produces a double-stranded break.

The repair mechanism for double-stranded breaks is error-prone, leading to mutations that disable or knock down the gene. It is possible to replace the mutant gene at this stage by adding DNA sequences that pair up with the cut ends.

Almost anyone with college-level biology expertise can run CRISPR/Cas9 experiments. All that is necessary to create CRISPR reagents for a new target is to synthesize the 20-bp guide sequences in CRISPR. The well-established TALEN gene-editing tool requires synthesizing an appropriate protein as well.

In its 2015 year-end issue the journal Science named CRISPR “breakthrough of the year.” Noting the popularity of earlier gene-editing techniques – and CRISPR’s runner-up status in the 2014 and 2013 year-end editions – correspondent John Travis wrote that CRISPR “broke away from the pack, revealing its true power in a series of spectacular achievements.”

All biology experiments are subject to off-target effects. For CRISPR that includes targeting the incorrect sequence to create the double-stranded break, or the effects of repair mechanisms crashing.

How serious are off-target effects? “It’s highly debated,” says Kryngle Daly, Ph.D. CEO at KBioBox (Worcester, Massachusetts, USA). “It’s serious enough that people are concerned about it, particularly for clinical applications.” In a CRISPR the guide RNA is composed of a three base pair sequence known as the PAM, and 20 trailing base pairs. Researchers believe the number, location, and degree of mismatches between the guide RNAs at the target may affect off-target activity. Mismatches in or near the PAM greatly reduce the potential for off-target events, while mismatches in the end of the guide RNA opposite from the PAM allow an off-target event.

At the time Joung said of his invention that, “Its impact will also be incredibly important for research pplications because off-target effects can potentially confound the results of any experiment. As a result, we envision that our high-fidelity variant will supplant the use of standard Cas9 for many research and therapeutic applications.”

Basic research has always had a relatively high tolerance for variability. As Cas9 constructs enter clinical trials, particularly for in vivo therapies, off-target risk should be reduced to as close to zero as possible. “You have to be able to predict off-target effects and their seriousness,” Daly says. “That implies understanding the biology a few additional layers deep, including the effects of changes to non-coding regions. Will those changes disrupt critical protein pathways, or induce only trivial changes?”

KBioBox offers two web-based services for predicting off-target effects of CRISPR/Cas9 experiments. The algorithms are completely new and do not rely on public-domain algorithms like the MIT and E-Crisp tools. KBioBox predicts 97% of off-target effects; the open source software is only about 50% accurate. 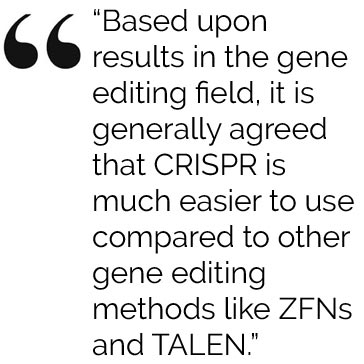 KBioBox’s “Off Target Analysis” service takes a given guide RNA design and in under a minute reports the “top ten” potential off targets, including location and annotation information.  Complimenting this service is KBioBox’s biodesign service which determines an ideal guide RNA design for a given application.  Given a species, gene, and intended effect, the biodesign service will calculate the “top ten” guide RNA designs, included with each design is an off target analysis report such that users can further select for their purposes.  Both of these services are extensible to any species or chemistry (e.g. TALEN, or custom enzymes).

Off-target effects are not always undesirable. Scientists exploit the chaotic double-strand repair mechanisms, which result in insertions and deletions at the break site, as a simple method for knocking genes out.

Scientist Metewo Enuameh, Ph.D at ATCC calls the in-licensing “exciting” for the organization and its customers. “Based upon results in the gene editing field, it is generally agreed that CRISPR is much easier to use compared to other gene editing methods like ZFNs (zinc finger nuclease) and TALEN.”

A549 is a standard cancer cell line for researching NSCLC, particularly for drug screening. “We added a genomic rearrangement that occurs in a subset of NSCLC patients.” In tests the new cell line responds to anti-cancer drugs similarly to cells taken directly from this NSCLC patients.

“The cells provide a functional in vitro readout,” Enuameh adds. “The beauty is that we now have a mutated cell line, which can be compared to the parental line for drug screening.”

In certain cancers, subsets of patients exist who are susceptible or resistant to various anti-cancer therapies. As these genetic variants are uncovered, ATCC will use CRISPR to generate new cell lines endowed with resistance or susceptibility to anti-cancer therapies, which will enable drug developers to test the effects of various compounds against cells that carry these mutations.

This development holds huge implications for personalized medicine. Based on knowledge gained through screening studies and patient biopsies, physicians of the future will be able to prescribe precisely the drug that will most likely to help the patient, and avoid ineffective treatments that will provide no relief and may introduce toxicity.

Instead of diagnosing and treating all NSCLC patients the same with standard treatments, variants on the gene-editing idea will allow rapid screening of drugs and treatments based on the patient’s genetic makeup. “Drug therapy will become more science-based,” Enuameh says.

Anja Smith, Ph.D., R&D Director at Dharmacon (A GE company; Denver, Colorado, USA) explains that “we have historically had reagents for knocking down or over-expressing genes. CRISPR-CAS9 allows complete knockouts.” More sophisticated custom genome engineering, including knock-ins, requires a template for repairing the break caused by CRISPR. This allows replacement or insertion of disease-related mutations, for example insufficient production of insulin or blood clotting factors. Knockdowns become routine in the chaotic atmosphere of a double-stranded break.

Dharmacon has to date focused more on knockout, which is more efficient in mammalian cells. Upcoming product offerings will include knock-in tools as well.

“Knock-ins are not very efficient in mammalian cells,” Smith explains. “Reagents and protocols that improve the efficiency of the break/insertion process will also improve knock-in efficiency.”

CRISPR/Cas9 Knock-ins have perhaps received most of the press, but many researchers are interested in knock-out for functional genomics studies. Numerous studies, for example, have demonstrated by knockouts which genes are essential in human cells.

Knock-ins are more elegant because they produce fundamental, permanent genomic changes. Clinical applications involving the correction of genetic diseases or inserting genes for therapeutic proteins are probably years away. However several companies are using knock-ins as part of immunotherapy protocols.

The problem with direct knock-ins into organs is the difficulty of systemic delivery of gene therapies. For the time being ex-vivo therapies make more sense. In this model, immune system cells are removed from patients and genetically modified to have cancer surface antigens. Once they are re-infused they “teach” the patient’s immune system to attack the patient’s tumor.

Another potential application is xenotransplantation, which has thus far been unsuccessful due to organ rejection. Using CRISPR, one could potentially knock out genes in animal organs that induce host-vs.-graft reactions. However, extremecare must be taken with these approaches because they are capable of transferring endogenous animal viruses into humans.

Gene editing based on TALEN (transcription activator-like effector nuclease) and zinc finger nuclease have produced encouraging results in immunotherapies for cancer and HIV. Given the extremely high anticipated cost of these therapies if they are approved, it is likely that immunotherapy companies newly entering the field would turn to the simpler and less expensive CRISPR/Cas9.

“The reason,” says Anja Smith, is that when you target gene ‘X’ with ZFNs and TALEN you must engineer the protein part of the complex, which is extremely costly and time-consuming. Researchers often must test several versions of the protein before finding one that works. And if you want to target gene ‘Y’ you must start over.”

CRISPR/Cas9 is the only gene editing technique that allows “gene drive,” a process by which two copies of a desirable gene may be inserted. For example, in late 2015 at group at the University of California led by Prof. Anthony James used CRISPR/Cas9 to engineer mosquitos that are incapable of carrying the malaria parasite. According to reports 99.5% of the offspring of the engineered mosquitos exhibited the desirable trait. With no additional help these mosquitos would likely breed with non-engineered mosquitos in the wild, thus reducing the malaria resistance by 50% every generation. After a few generations the trait would disappear. The California investigators employed gene drive, which creates “selfish” versions of the anti-malaria genes, which pass on two copies the anti-malaria gene to all offspring.