Complete the form below and we will email you a PDF version of "The Gene Factory: Can Enzymes Revolutionize Man-Made DNA Synthesis?"

The mammoth task of creating synthetic DNA shows how a simple idea can be infinitely complex in practice. The theory is straightforward enough: DNA synthesis involves building a man-made version of the nucleic acid strands that form our genetic code. The DNA molecule is probably the most famous structure in biology but recreating that structure using man-made tools is a task that has occupied many minds for years, including those of the 28 employees of Paris-based DNA Script, a startup with a goal of changing how biology builds genetic synthetics.

“It's clear that the ability to progress in R&D in this field is related to the tools that you're using and the technology that is available,” says Sylvain Gariel, DNA Script’s COO and co-founder. Gariel recognizes that the industry is growing at an incredible rate but is not being supported by available technology: “When you look at the technologies that are being used to create synthetic DNA, they haven't changed in the last 40 years. Consequently, there is a big discrepancy in terms of performance between the chemical technologies that now are the conventional methods used on the market, and the performances of another industry, for example the sequencing industry - there is probably a 100,000 to 1,000,000-fold difference in cost. Turnaround time is also a big problem, and so this is what we're trying to solve."

The chemical technology that Gariel refers to is the phosphoramidite method, developed by Marvin Caruthers at the University of Colorado in 1981. Phosphoramidites are derivatives of nucleosides, a molecule containing two thirds of the tripartite DNA unit – a base (one of adenine (A), thymine (T), guanine (G) or cytosine (C)) and a deoxyribose sugar molecule.  These molecules can be added together using a complicated four-step synthesis method that, despite being tweaked and automated over the years, still very much relies on Caruthers’ original research. Gariel and his team believe it’s time for an update.

The phosphoramidite method has somewhat advanced over the years, says Gariel, “Now we are able to do routinely 100 nucleotides with chemistry, and sometimes it is possible to go further. The problem is, the coupling efficiency per step is somewhere between the range of 98.5% and 99.5%. What that means is that if you do 100 reactions in a row, you would have the effect of an exponential decrease of your yield.”

“So, you must manufacture small pieces of DNA, and then you need to find a way to stitch them together to be able to manufacture longer constructs and in particular, genes. It's a very tedious process. Some people are mastering it and making it feasible, but still, if you want to order a specific gene online today, it's going to cost you a few hundred bucks and you will probably need something around 20 days before you can get your product.” 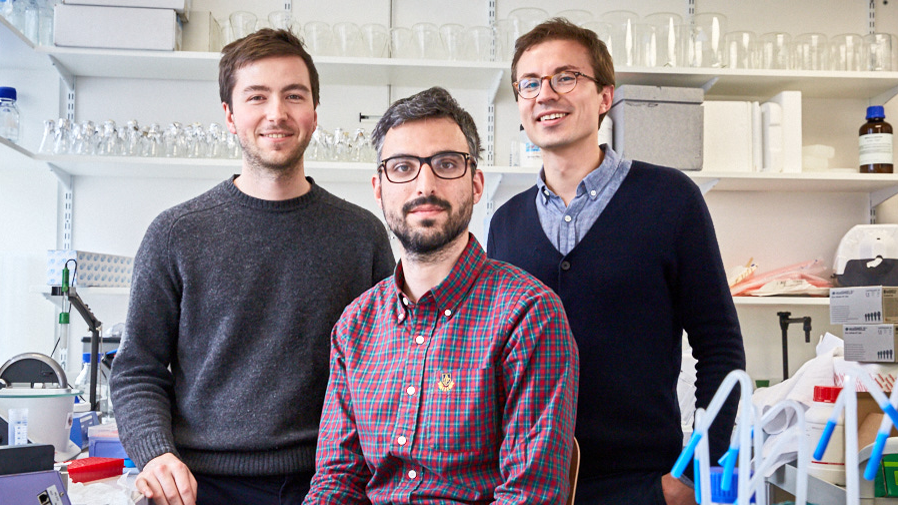 What Gariel and his team propose is a new method for synthesizing DNA that relies on the company’s proprietary biomimetic enzymes. These enzymes are based on the structure of polymerase, a protein that is responsible for the natural synthesis of DNA that occurs inside our cells. These polymerase mimics are combined with DNA Script’s modified nucleotides which allow the synthesis process to be tightly controlled. The firm has licensed technology from the Foundation for Applied Molecular Evolution (FfAME) that allows DNA Script’s enzymes to synthesize DNA without the need for a template sequence upon which to build the synthetic sequence. Gariel hopes that this technology, originally developed for DNA sequencing, will help DNA Script replicate the advances seen in that field.

One Technology, Many Applications

DNA sequencing, however, is an end unto itself – determining genome sequences helps us understand more about the world around us and is used for everything from fighting cancer to finding frogs. What is synthetic DNA actually used for? Prof Floyd Romesberg, of the Scripps Research Institute, has spent years thinking up imaginative uses for artificial DNA. Romesberg explains how his lab use synthetic DNA for their work: “We do different types of research that rely on synthetic DNA. Probably about half of my lab works on some aspect of DNA, usually replication of DNA containing modifications, for example modifications of the sugar, or the introduction of wholly unnatural base pairs. In my early days, we spent a lot of time synthesizing pieces of DNA that we would analyze with DNA polymerases. We pretty much always had to start from a synthetic piece of DNA. Now, it's a lot more advanced, and we work with DNA in cells, for example, but we always do start with a synthetic piece of DNA. That's really a requirement of a lot of modern synthetic biology research”.

One of the focuses of Romesberg’s research is to expand the DNA alphabet using “Unnatural Base Pairs” (UBPs). This alphabet refers to the four natural nitrogenous bases.  Romesberg’s lab hit the headlines last year after they unveiled a “semi-synthetic” bacterium containing two extra bases; X and Y. These UBPs are added into plasmids, circles of DNA that lie outside bacterial chromosomes.

So, will enzymatic technology be adopted into this work? Romesberg suggests that the applications might need time to catch up with the technology: “We might not use it now, but we probably will in the not-too-distant future. What we do now is incorporate only one or two UBPs in a plasmid - we can do this with fragments and assembly methods - as the rest of the DNA is natural. But as we start to push and incorporate multiple UBPs into a plasmid - say a plasmid with 8 UBPs - if they are all localized to one small region then we could certainly do it the way we do now, but if they are spread out then that becomes increasingly unwieldy. So synthetic DNA will become increasingly useful for us to be able to synthesize larger fragments of DNA into plasmids.”

The Future of DNA Data Storage

One recent  application of synthetic DNA was to use it as a storage device that holds more data and lasts far longer than silicon-based flash drives. Gariel says that for emergent technologies like this to take off, enzymatic methods are a requisite: “I think if you want to go to DNA data storage – and this is only my opinion – you will need enzymatic synthesis. Why? Because when you look at the level of cost and time that you need to do DNA data storage, you will need every single bit of optimization that you can find, because current speeds are orders of magnitude away. You will need to do this reaction fast, and I don't think phosphoramidite chemistry can go this fast.”

Whilst Gariel is keen to emphasize that his enzymatic technology is at least a few years away from being able to change how we make synthetic genes and store the world’s information, Romesberg points out that the fact that a niche for such technology exists shows how quickly the field has moved: “If you asked someone 20 years ago if enzymatic technology was needed, they would say “No, no-one would need that” but as technologies develop, allowing us to do various different things with synthetic technology; people wanting to even make genomes, it's only with these new horizons and goals that people have now a need for longer DNA.”

Gariel, at least, seems prepares to meet ambitious research at these new horizons, and bring a long-promised revolution to synthetic genetics: “Over time, we're realizing that synthetic DNA is to the life science industry what silicon was to the IT world, and what that means is we need to be able to write DNA as efficiently as we read it today.”

Complete the form below to unlock access to this Audio Article: "The Gene Factory: Can Enzymes Revolutionize Man-Made DNA Synthesis?"