Kate Robinson is the editorial assistant at Technology Networks. She joined the team in 2021 after obtaining a bachelor's degree in biomedical sciences.
Learn about our editorial policies
Industry Insight

Kate Robinson is the editorial assistant at Technology Networks. She joined the team in 2021 after obtaining a bachelor's degree in biomedical sciences.
Learn about our editorial policies

Illumina has announced that the 2021 winner of its Agricultural Greater Good grant is Dr. Bertram Brenig, professor of molecular biology at the University of Göttingen. Brenig is researching the Western Honey bee, a pollinator facing multiple challenges and population decline.

The Agricultural Greater Good Initiative is an annual program that supports research that aims to increase the sustainability, productivity and nutritional density of agriculturally important crop and livestock species

Technology Networks spoke with Brenig and Illumina to find out more about how studying genetic differences in honey bees will improve breeding programs, and how Illumina will support this research.

Kate Robinson (KR): What inspired Illumina to establish the Greater Good Initiative and how does the program support agricultural research?

Illumina (I): The Agricultural Greater Good Initiative grant was launched in 2011 from our desire to fuel advancements that could increase sustainability and nutritional density of agriculturally important crop and livestock species.

This initiative recognizes ground-breaking research in the agricultural community that reflects scientific merit and innovation and harnesses the power of genomics to help alleviate global hunger, malnutrition and poverty.

KR: In what ways does Illumina support the winner's research efforts?

I: When selecting a winner for this grant, we prioritize projects that can improve sustainability in important areas of agriculture, particularly those underserved by public funding and resources. Prize winners receive 20 terabases (Tb) of Illumina NovaSeq sequencing data on samples of their choice to support their project.

KR: Can you tell us about some of the previous winners and their research focuses?

I: Some recent winners include:

Cultivated predominantly in Asia, the mungbean is an important crop as it has good stress tolerance, but farmers are challenged by low yields and disease susceptibility.  The grant was given to enable testing of new mapping approaches to reveal the genetic basis of important traits in the mungbean; maximizing the use of genetic sequencing information aids better understanding of the species and accelerates breeding of improved varieties.

Camel farming plays a pivotal role in agriculture in many parts of the world. Because of their adaptability to a variety of environments, camels have numerous functions as multi-purpose animals used for wool, meat, milk and leather, making them valuable allies in the current context of climate change and desertification. The grant was to enable the first-ever whole-genome sequencing diversity study to assist applied camelid breeding and genetic conservation programs.

Sweet potato (Ipomoea batatas) is the seventh most important food crop globally due to its adaptability to different climates and is a biofortified staple crop in combating vitamin A deficiency in sub-Saharan Africa and southeast Asia. However, the highly heterozygous and hexaploid nature of its genome, and 96 chromosomes, make trait inheritance from generation to generation complex, challenging efforts to use molecular breeding techniques to breed more nutritious sweet potatoes and optimize the crop to regional needs. The grant was to support researchers’ efforts in developing a de novo whole genome assembly and SNP (single nucleotide polymorphism) array that represents sweet potato global diversity; the use of such an assay in breeding programs would optimize the crop to regional needs, helping to develop more nutritional sweet potatoes and improve food security in areas where nutritional resources are lacking.

KR: What dangers are faced by honey bees and what impact might this have on agriculture

Bertram Brenig (BB): Similar to other species, honey bees are facing a number of biotic and abiotic threats contributing to the decline of populations, including parasites, pathogens, habitat loss, climate change, limited food resources, exposure to pesticides and poor beekeeping management. It is clear that the interplay of several of these factors are the cause of the problem that has been observed for many years worldwide. There is agreement that increasing exposure to parasites and pathogens is an essential part of the problem which together lead to a weakening and increasing vulnerability of the populations and ultimately to their collapse. Honey bees are hosts for various pathogens, like bacteria, viruses and fungi. A variety of parasites that infest honey bees have also been identified. These parasites are often intermediate hosts of Honey bee pathogens and transmit diseases. The infestation of the Western honey bee with the mite Varroa destructor has caused severe damage to the populations. The Varroa mites damage both the adult bees and the brood. The bees are weakened by the mites sucking on the hemolymph and the mites can transmit disease (e.g., Deformed Wing Virus) to the bees. If a virus and the mite appear in the colony at the same time, their harmful effects on the bees are exacerbated.

Around 80% of domestic crops are dependent on pollination by honey bees and other pollinators. Without this pollination service there would not only be far fewer fruits, but also fewer different types and varieties of plants. This is due to the fact that plants can reproduce by self-fertilization or asexual reproduction without foreign pollen, however, the offspring will then be genetically identical. For the development of new variants, two parents are necessary. The loss of pollinators will have a direct and dramatic impact on agricultural yields and diversity. 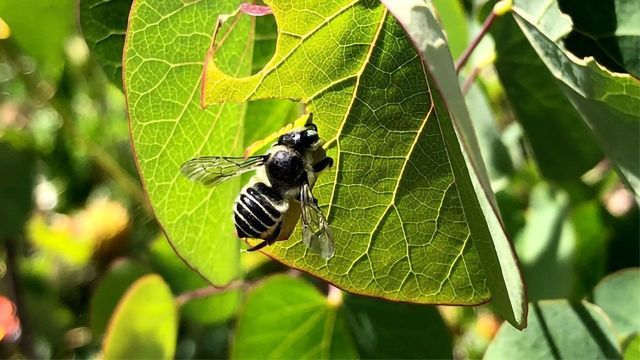 Common Insecticide Is Harmful to Bees in Any Amount

END_OF_DOCUMENT_TOKEN_TO_BE_REPLACED

KR: Can you elaborate on the methods you plan to use to study honey bee vulnerabilities?

BB: In our project we want to address essentially three questions:

To answer these questions, we have collected a total of 526 honey bee samples, including 228 samples of the Western honey bee and 106 samples of the Eastern honey bee together with 32 queens and 160 controls. All honey bees were selected based on the type and intensity of action regarding their Varroa hygiene behavior. With this, we have a very unique collection of extremely well-defined samples. In the first set of experiments, we will perform a whole genome resequencing of all samples and perform a genome wide association analysis. In addition, we hope that with these data we will be able to fill some existing gaps in the genomes of both species. The data will also allow us to perform some phylogenetic studies at a high-resolution level. In the second set of experiments, we will focus on the epigenetics of the Varroa hygiene behavior. Honey bees harbor a completely different methylation pattern in their genome compared to mammals, for example, and it has been shown that some social behavior in honey bees is influenced by a specific epigenetic signature. We therefore will determine the methylation pattern (5mC and 5hmC) in all samples and associate this with the type and intensity of the Varroa hygiene behavior.

KR: How do you envision your research being used to reduce honey bee population decline?

BB: It is our hope that with the data and results generated within this project, new molecular mechanisms controlling Varroa hygiene behavior will be identified. The identification of new molecular mechanisms and the genomic variants causative for the differences between the Varroa hygiene behavior of Western and Eastern honey bees will ultimately result in a set of DNA markers that can be used in breeding programs to efficiently select resistant honey bees.