Ruairi is a senior science writer at Technology Networks. He holds a Master's degree in clinical neurosciences from the University of Cambridge and has written for Technology Networks since 2018.
Learn about our editorial policies
Listicle

Deoxyribonucleic acid (DNA) and ribonucleic acid (RNA) are perhaps the most important molecules in cell biology, responsible for the storage and reading of genetic information that underpins all life. They are both linear polymers, consisting of sugars, phosphates and bases, but there are some key differences which separate the two1. These distinctions enable the two molecules to work together and fulfil their essential roles. Here, we look at 5 key differences between DNA and RNA. Before we delve into the differences, we take a look at these two nucleic acids side-by-side. 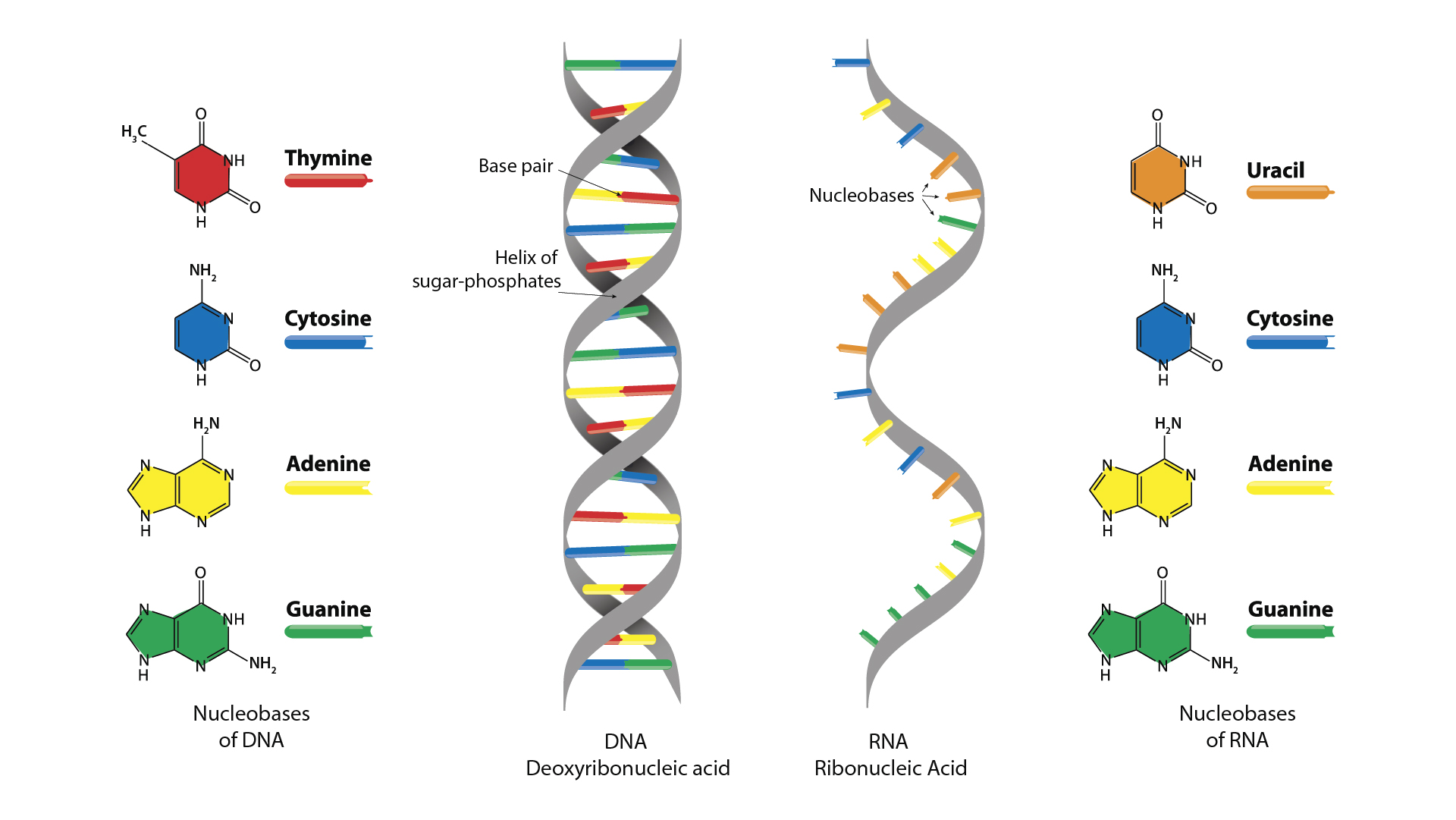 DNA vs. RNA – A comparison chart

What are the key differences between DNA and RNA?

We can identify five key categories where DNA and RNA differ:

DNA encodes all genetic information, and is the blueprint from which all biological life is created. And that’s only in the short-term. In the long-term, DNA is a storage device, a biological flash drive that allows the blueprint of life to be passed between generations2. RNA functions as the reader that decodes this flash drive. This reading process is multi-step and there are specialized RNAs for each of these steps. Below, we look in more detail at the three most important types of RNA.

What are the three types of RNA?

Both DNA and RNA are built with a sugar backbone, but whereas the sugar in DNA is called deoxyribose (left in image), the sugar in RNA is called simply ribose (right in image). The ‘deoxy’ prefix denotes that, whilst RNA has two hydroxyl (-OH) groups attached to its carbon backbone, DNA has only one, and has a lone hydrogen atom attached instead. RNA’s extra hydroxyl group proves useful in the process of converting genetic code into mRNAs that can be made into proteins, whilst the deoxyribose sugar gives DNA more stability3. 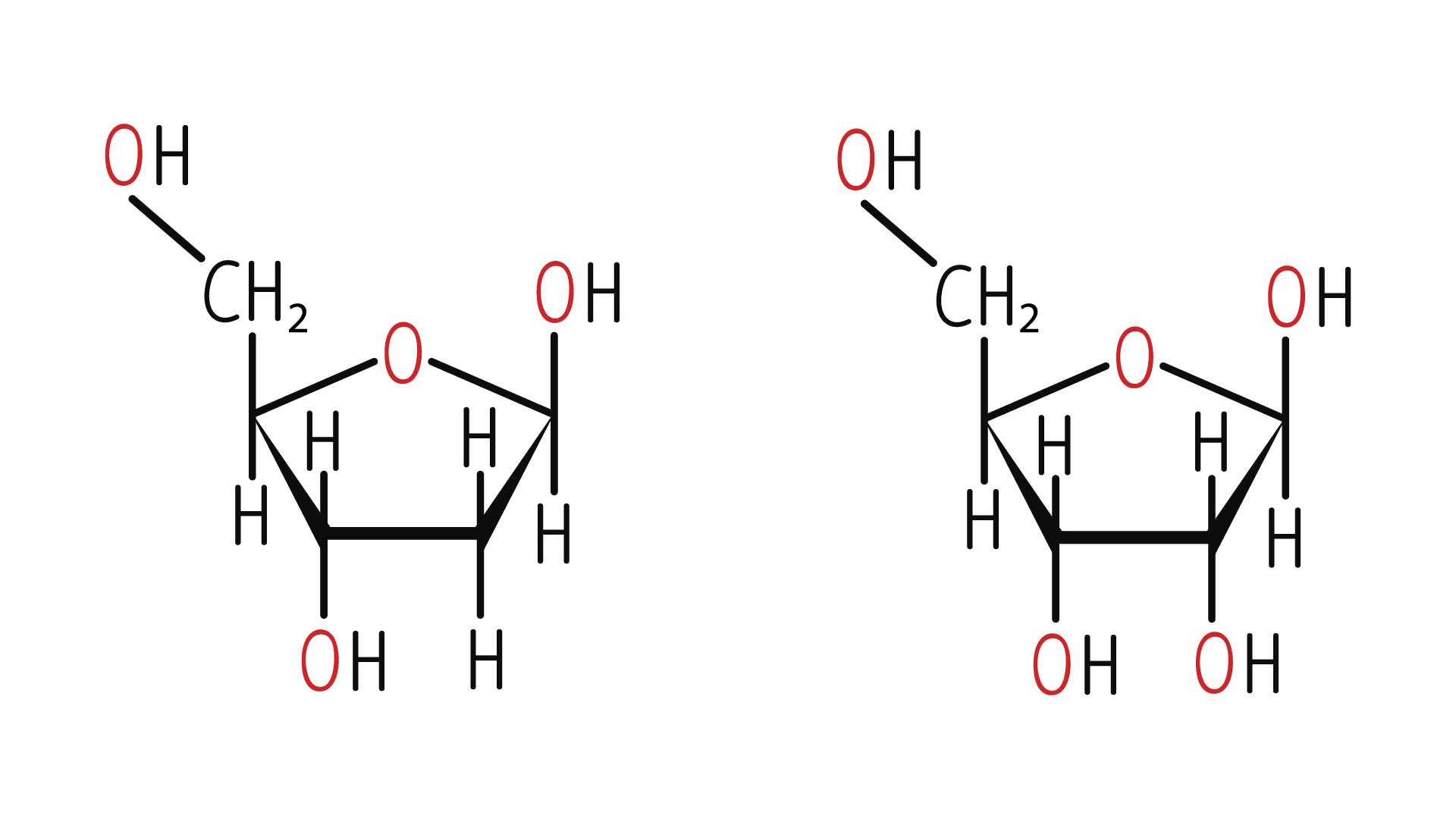 The ﻿chemical structures of deoxyribose (left) and ribose (right) sugars

The nitrogen bases in DNA are the basic units of genetic code, and their correct ordering and pairing is essential to biological function. The four bases that make up this code are adenine (A), thymine (T), guanine (G) and cytosine (C). Bases pair off together in a double helix structure, these pairs being A and T, and C and G.  RNA doesn’t contain thymine bases, replacing them with uracil bases (U), which pair to adenine1.

While the ubiquity of Francis Crick and James Watson’s (or should that be Rosalind Franklin’s?) DNA double helix means that the two-stranded structure of DNA structure is common knowledge, RNA’s single stranded format is not as well known. RNA can form into double-stranded structures, such as during translation, when mRNA and tRNA molecules pair. DNA polymers are also much longer than RNA polymers; the 2.3m long human genome consists of 46 chromosomes, each of which is a single, long DNA molecule. RNA molecules, by comparison, are much shorter3.

Eukaryotic cells, including all animal and plant cells, house the great majority of their DNA in the nucleus, where it exists in a tightly compressed form, called a chromosome4. This squeezed format means the DNA can be easily stored and transferred. In addition to nuclear DNA, some DNA is present in energy-producing mitochondria, small organelles found free-floating in the cytoplasm, the area of the cell outside the nucleus.
The three types of RNA are found in different locations. mRNA is made in the nucleus, with each mRNA fragment copied from its relative piece of DNA, before leaving the nucleus and entering the cytoplasm. The fragments are then shuttled around the cell as needed, moved along by the cell’s internal transport system, the cytoskeleton. tRNA, like mRNA, is a free-roaming molecule that moves around the cytoplasm. If it receives the correct signal from the ribosome, it will then hunt down amino acid subunits in the cytoplasm and bring them to the ribosome to be built into proteins5. rRNA, as previously mentioned, is found as part of ribosomes. Ribosomes are formed in an area of the nucleus called the nucleolus, before being exported to the cytoplasm, where some ribosomes float freely. Other cytoplasmic ribosomes are bound to the endoplasmic reticulum, a membranous structure that helps process proteins and export them from the cell5.

Unusual types of DNA and RNA

The structure we have described in this article is certainly the most common form of DNA, but it isn’t the whole story. Other forms of both DNA and RNA exist that subvert the classical structures of these nucleic acids.

While the structure of DNA you will see above – and in any biology textbook you might care to open – has a right-handed helix, DNA molecules with left-handed helices also exist. These are known as Z-DNA. Canonical, “classic” DNA is called B-DNA.
Z-DNA molecules are:

Z-DNA is thought to play a role in regulating gene expression and may be produced in the wake of DNA processing enzymes, like DNA polymerase.

Identified at the same time as B-DNA by Rosalind Franklin, A-DNA is an alternative DNA structure that often appears when the molecule is dehydrated. Many crystal structures of DNA are in an A-DNA form. It has a shorter structure, with different numbers of base pairs per turn and tilt than B-DNA. A-DNA’s biological relevance has been greatly expanded on in recent years, and it is now recognized that A-DNA is involved in many roles, such as:

A triple-helix DNA structure can form when certain nucleobases – pyrimidine or purine – occupy the major grooves in conventional B-DNA. This can happen naturally or as part of intentional DNA-modifying strategies for research purposes.

Triplex-forming oligonucleotides (TFOs) can bind conventional two-stranded DNA, which can help guide agents that are used to modify DNA to specific genomic locations. H-DNA is an endogenous, triple-stranded DNA molecule that encourages mutation of the genome.

Double-stranded RNA (dsRNA) is most commonly found as the genomic basis of many plant, animal and human viruses.  These include Reoviridae and the rotaviruses, which are responsible for diseases like gastroenteritis. dsRNA molecules are potent immunogens – they activate the immune system, which then cuts the dsDNA as a protective mechanism. The discovery of the protein machinery that permits this reaction led to the development of gene silencing RNAi technology, which won the 2006 Nobel Prize for Physiology or Medicine.