3D Map of the Human Genome

3D Map of the Human Genome

The location of genes and regulatory elements within this chromosomal framework could help scientists better navigate their genomic research, establishing relationships between mutations and disease development.

“This is transformational,” says Whitehead Member Richard Young. “This map allows us to predict how genes are regulated in normal cells, and how they are misregulated in disease, with far greater accuracy than before.”

In order to regulate gene expression, a regulatory element needs to contact its target gene. Through looping, element/gene partners that are distant from each other in linear DNA can be brought together. Most disease mutations occur in regulatory elements, but if the partnership between a seemingly far-flung gene and the regulatory element is not known, the mutation data is of limited use. This draft map, which can help scientists predict the relationships between mutated elements and their target genes, is described online. 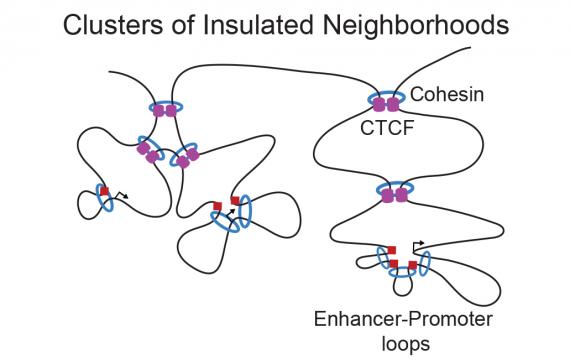 “When thinking about disease, we need to think about the structure of the genome in 3D space because that is how we now understand that genes are regulated,” says Xiong Ji, a postdoctoral researcher in the Young lab and a co-author of the  paper.

One of Ji’s co-authors, graduate student Daniel Dadon, agrees. “This three-dimensional information helps us to interpret regulatory and mutational data with unprecedented accuracy. It’s not just a bag of genes and regulatory elements in the nucleus—this is a highly organized structure that confers function.”

Previous research in mouse ES cells by Young’s lab and others determined that a chromosome’s DNA is formed into loops that are anchored at their bases by proteins called CTCFs. The benefits of the loops are two-fold. First, the loops help organize and package two meters of DNA to fit into a nucleus that is approximately 5 micrometers in diameter. Second, each loop creates an insulated neighborhood that restricts the action of a regulatory element to genes that resides in the same loop.  As graduate student and co-author Diego Borges-Rivera states, “The genome’s 3D shape is a key mechanism underlying gene regulation.”

By studying human ES cells, scientists in the Young lab and the lab of Whitehead Founding Member Rudolf Jaenisch created an initial genome map consisting of 13,000 loops established by CTCF anchors and determined that the average insulated neighborhood is 200 kb in length and contains a single gene. The team found that most of the the mapped CTCF anchor sites in the human ES cells genome are maintained in other human cell types and furthermore, that these loop anchor sequences are highly conserved in primate genomes. Such a surprising degree of conservation indicates that these neighborhoods create a foundational framework for gene regulation that is maintained throughout development and across species.

In a further finding that underscores the importance of the genome’s 3D structure in human health, the Whitehead team found that the CTCF anchor regions are mutated in a broad spectrum of cancer cells.   The team predicts that these new maps of the human genome will provide the foundation for improved understanding of the genetic alterations that cause many additional diseases.