Complete the form below and we will email you a PDF version of "A Coronavirus Epidemic Took Place 20,000 Years Ago"

A collaborative research study has analyzed genetic data from the 1000 Genomes Project and discovered that a coronavirus epidemic occurred in East Asia over 20,000 years ago. The study is published in Current Biology.

How often do you find yourself lost in a daydream? Joyfully recalling a time when friends were greeted with a hug, you complained about being thrust against other sweaty bodies on the subway during your morning commute to work and hand sanitizer was found only in the loos at a festival. Ah – pre-pandemic life. Or, or as some have come to call it, life BC – "before covid". In truth however, our generation does not know a "BC".

SARS-CoV-2 is not the first coronavirus we have encountered. Chances are that, at some point in your life, you have been infected by a "sibling" of the virus that belongs to the same Coronaviridae family. These viruses often cause respiratory infections and are associated with the common cold. However, as demonstrated by the SARS-CoV outbreak of 2003 that claimed 774 lives, the MERS-CoV outbreak of 2012 and the current COVID-19 pandemic, coronaviruses are capable of evolving over time to become increasingly transmissible and dangerous to humans.

Now, a new body of work suggests that the ancestors of modern humans in East Asia had to contend with a coronavirus epidemic that occurred 20,000 years ago. The research is a collaborative effort involving a number of institutions, including Queensland University of Technology (QUT), the University of Arizona, Stanford University and the University of California San Francisco.

"The initial contact [between research groups] took place in the early days of the COVID-19 pandemic and was focused on combining the expertise of the groups to understand the interactions between the virus [SARS-CoV-2] and the host cell," says Kirill Alexandrov, professor of synthetic biology at QUT, and research lead on the project. Understanding such interactions is fundamental for developing drugs that are both preventative and therapeutic in nature. Part of this research involved conducting bioinformatic analyses of human genomes for coordinated mutations in the genes that interact with SARS-CoV-2.

VIPs: Very important proteins, for a pathogen at least

To understand how this project led to the discovery of an ancient epidemic, let us take a step back and understand the role of a specific type of protein, known as a VIP (virus-interacting protein). As the name suggests, these proteins are part of the cellular machinery that interact with viruses that enter the body. Throughout human evolution, selection has led to a fixation of genetic variants that encode VIPS, at a rate of three times greater than the rate of other classes of genes. For some reason, evolution is keeping these genes around in the human genome.

"The accumulated evidence suggests that ancient RNA virus epidemics have occurred frequently during human evolution; however, we currently do not know if selection has made a substantial contribution to the evolution of human genes that interact more specifically with coronaviruses," the authors write.

Understanding whether selection has contributed here is important. It can teach us about the influence of viruses on human evolution and our present-day genomes.

But how do we measure this influence? "All genomes constantly accumulate mutations, most of which are harmless and lead to no change of function of genes they affect," explains Alexandrov. "You can think about the rate of mutation as a constantly ticking genetic clock. When there is a selection pressure [such as an epidemic], the clock of some genes starts to tick much faster as they accumulate advantageous mutations." 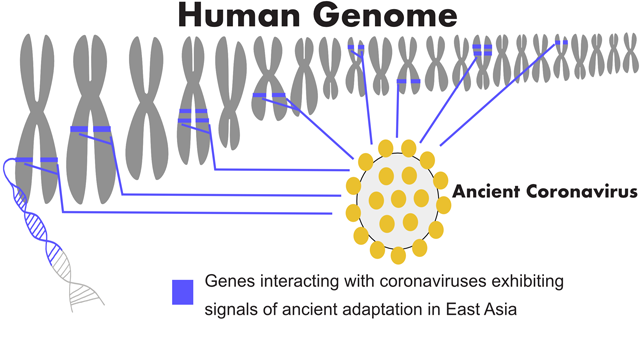 Strong signals of genetic adaptation to coronaviruses are evident in East Asian population, the signals are evident at several genes interacting with coronaviruses, including SARS-CoV-2. Credit: The University of Adelaide.

In this study, Alexandrov and colleagues analyzed genome sequences from 26 different populations that were part of the 1,000 Genome Project and looked for evidence of "ticking" in certain genes: those that encode for VIPs. "By comparing a very large number of sequenced human genomes it was shown that, over 20,000 years ago, the clock of many human genes that SARS-CoV-2 uses to manipulate human cells started ticking faster – simultaneously – most likely indicating that there was a viral pandemic caused by a similar virus," he explains.

Specifically, the ticking was observed in genome data obtained from East Asian populations. "This suggests that an ancient coronavirus epidemic (or another virus using similar VIPs) drove an adaptive response in the ancestors of East Asians," the authors write.

Next, Alexandrov and colleagues used synthetic biology approaches to confirm whether the human VIPS encoded by genes that were enriched 20,000 years ago interacted with SARS-CoV-2 proteins. Indeed, they did, which the scientists say points to the evolutionary conserved nature of the mechanism that coronaviruses use to hijack human cells.

From the study data, the researchers infer that the East Asian coronavirus epidemic was likely to be a large and drawn-out event that lasted for several generations and ultimately "shaped" the genome of the affected population.

It makes one wonder how the SARS-CoV-2 pandemic could leave its mark on the human genome for years to come. However, Alexandrov emphasizes that this research does not imply causality: "While it is very likely that the changes in human genomes were caused by a coronavirus epidemic, the work does not provide a direct proof," he says.

Next, the scientists intend to conduct genomic analysis of even larger populations of people which may reveal the existence of more ancient infectious disease outbreaks, and further deduce the historic relationship between viruses and the evolution of humans. "The approaches developed in this study can drive pandemic preparedness efforts," Alexandrov adds. The project would not have been possible without the team effort, he concludes: "This was a truly interdisciplinary, inter-institutional and international effort. The study combined the work of bioinformatics team led by David Enard (at the University of Arizona) and of the synthetic biology at QUT."

Meet the Scientists Bringing Back the Extinct Tasmanian Tiger