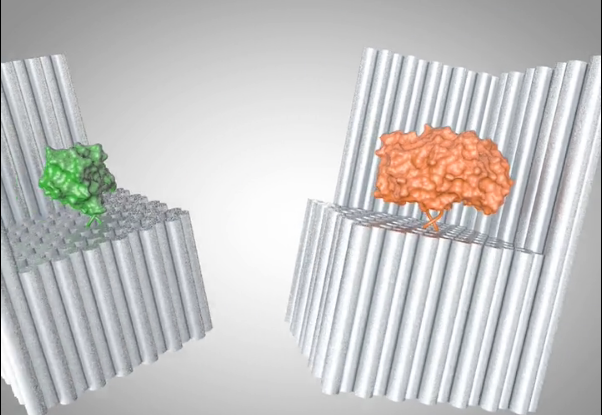 In a new study, Hao Yan, director of the Center for Molecular Design and Biomimetics at Arizona State University’s Biodesign Institute, presents a clever means of localizing and confining enzymes and the substrate molecules they bind with, speeding up reactions essential for life processes.

The technique involves the design of specialized, nanometer-scale cages, which self-assemble from lengths of DNA. The cages hold enzyme and substrate in close proximity, considerably accelerating the rate of reactions and shielding them from degradation.

“We have been designing programmable DNA nanostructures with increasing complexity for many years, and it is now time to ask what can we do with these structures,” said Yan, who is also a professor in ASU’s School of Molecular Sciences in the College of Liberal Arts and Sciences. “There are numerous other applications from this emerging technology. Through our interdisciplinary collaborative effort, we here describe the use of designer DNA nanocages to compartmentalize enzymatic reactions in a confined environment. Drawing inspiration from nature, we have uncovered interesting properties, some unexpected.”

Zhao Zhao, a researcher in the Center for Molecular Design and Biomimetics, was the lead author of the paper, which was co-authored with researchers from ASU's Department of Chemistry, Rutgers and the University of Michigan.

As chemical activators for virtually every reaction in the body, enzymes are key participants in the normal activity of cells, tissues, fluids and organs. Hundreds of thousands of metabolic enzymes are present in the human body, involved in diverse activities including DNA copying and repair and the transformation of glucose into useable energy. Elsewhere, some 22 digestive enzymes break down carbohydrates (amylases), fats (lipases ) and sugars (disaccharides), while so-called protease enzymes digest proteins.

Enzymes tend to be highly specific, not only in the useful functions they perform, but the precise substrates with which they will work. Substrate molecules of exactly the right size and shape bind with their appropriate enzymes as the correct key fits into the ridges and grooves of a lock.

Substrates latch onto enzyme molecules at a particular region known as the active site. Once enzyme and substrate have combined, a chemical product is formed and then released, returning the enzyme to its original configuration where it is ready to operate on a new molecule of substrate.

In order for such reactions to take place in an efficient manner, nature has devised methods of compartmentalization, forming natural reactor sites where enzyme-substrate reactions unfold. The cell itself is such a compartment, as are various membrane-bound organelles found in eukaryotes (cells containing a nucleus), including mitochondria, lysosomes and peroxisomes.

Compartmentalization of reactants helps to overcome a variety of challenges, bringing binding chemicals into cozy proximity, isolating enzyme-substrate complexes from competing reaction chemicals, improving the yield of product molecules produced and reducing the toxicity various intermediary chemicals can sometimes cause.

In order to induce or catalyze chemical reactions for a variety of purposes, synthetic biologists have copied a page from Nature’s recipe book, designing artificial compartments fabricated from proteins, lipids or the nucleic acids found in DNA (as in the current study).

Yan and his colleagues designed their synthetic reactors to house enzymes and their substrates, allowing chemical conversions to take place in a controlled environment. Each minute structure, measuring just 54 nanometers across, is something like a Faberge egg whose separate halves fit together to encapsulate their chemical contents. (A nanometer is one-billionth of a meter or roughly 80,000 times smaller than the width of a human hair.)

Using the base pairing properties of DNA’s four nucleotides — labeled A, T, C and G — allows nanoscale architects like Yan to construct myriad forms in two- and three-dimensions. In the new study, DNA nanocages were used to encapsulate metabolic enzymes with high assembly yield and fine-tuned control over reactants and products.

The construction of the nanocages takes place in two steps. First, individual enzymes are attached into open half-cage structures. Then, the half-cages are fitted together into a full, closed nanocage. To create the half-cages, a technique known as DNA origami is used. Lengths of viral DNA are prepared to self-assemble into a honeycomb lattice, with A nucleotides pairing with C and T with G.

The open-sided half-cages of the DNA nanocages allow the access of large protein molecules into the nanocage’s internal cavity. The two half-cages are fitted together with the aid of short bridge DNA strands that bind with complementary DNA sequences extending from the edges of either half-cage (see animation below). The small gaps on each of the top and bottom surfaces of the DNA nanocage allow the diffusion of small molecules across the DNA walls.

To examine the resulting structures Transmission Electron Microscopy was used, along with gel electrophoresis and single-molecule fluorescence experiments, which demonstrated that close to 100 percent of the DNA segments properly formed half-cage structures and more than 90 percent formed full cages.

The study examined six different enzymes, ranging in size from the smallest, which measured ~44kD (kilodaltons) to the largest, ~ 450 kD. All six enzymes were successfully encapsulated in nanocages, though the yields varied according to enzyme size. The largest enzyme examined, known as β-galactosidase, showed the lowest yield of 64 percent.

Subsequent experiments demonstrated that most of the effect on enzyme-substrate activity in nanocages is due to the unique charge environment within nanocages, rather than enzyme-substrate proximity. The authors suggest that encapsulated enzymes exhibit higher activity within densely packed DNA cages as a result of the highly ordered, hydrogen-bonded water environment surrounding them.

An evaluation of enzyme activity showed a 4- to 10-fold increase for enzymes encapsulated in nanocages, compared with the activity of free enzymes. Enzyme turnover rate — defined as the maximum number of chemical conversions of substrate molecules per second — was inversely correlated with the size of encapsulated enzymes, with the smallest enzyme yielding the highest turnover.

The DNA cages demonstrated their resiliency during the experiments, retaining their structural form throughout the enzymatic reactions. They also protected encapsulated enzymes from deactivation due to digestive chemicals, while permitting the uninterrupted diffusion of small-molecule substrates and reaction products through the nanopores of the DNA cage.

Encapsulation in nanocages was shown to increase the fraction of active enzyme molecules and their individual turnover numbers. The method thus provides a new molecular tool to modify the local environment surrounding enzymes and their substrates, opening the door to new applications in smart materials and biomedical applications. Among the latter are futuristic, programmable cages that could be used as nanoscale delivery mechanisms for a wide range of therapeutic agents.