Biosensors are powerful tools in synthetic biology for engineering metabolic pathways or controlling synthetic and native genetic circuits in bacteria. Scientists have had difficulty developing a method to engineer "designer" biosensor proteins that can precisely sense and report the presence of specific molecules, which has so far limited the number and variety of biosensor designs able to precisely regulate cell metabolism, cell biology, and synthetic gene circuits.

But new research published in Nature Methods by a team at Harvard's Wyss Institute for Biologically Inspired Engineering and Harvard Medical School (HMS) has leveraged combination of computational protein design, in vitro synthesis and in vivo testing to establish a first-of-its-kind strategy for identifying custom-tailored biosensors.

"Our original motivation for developing customizable biosensors was to get a life or death feedback loop for metabolic engineering," said George Church, Ph.D., Wyss Institute Core Faculty member, Professor of Genetics at HMS, Professor of Health Sciences and Technology at Harvard and the Massachusetts Institute of Technology (MIT), and the senior author on the study. "This would essentially give us 'Darwinian evolution on steroids', where colonies of bacteria genetically programmed to output a desirable commodity molecule would rapidly become more efficient from generation to generation as only the best metabolic producers will be 'self-identified' for survival."

"This advance represents a powerful new way for us to access the chemical diversity of the biosphere by mining for new pathways to make useful molecules," said Srivatsan Raman, Ph.D., formerly a Postdoctoral Fellow at the Wyss Institute and HMS and currently Assistant Professor of Biochemistry at University of Wisconsin-Madison, who is the corresponding author on the study.

To develop the method, researchers chose as their test case a natural regulatory protein from E. coli called LacI. LacI is an allosteric transcription factor (aTF), which becomes active in response to sensing "inducer" metabolites or molecules in the bacterium's environment, thereby triggering expression of a downstream gene. Using LacI, the team set out to develop a framework for re-engineering new biosensor variants that would respond to four inducer molecules (lactitol, sucralose, gentiobiose, and fucose) that cannot be metabolized by natural E. coli. Sucralose, for example, is a completely synthetic sugar molecule sold commercially as Splenda®. 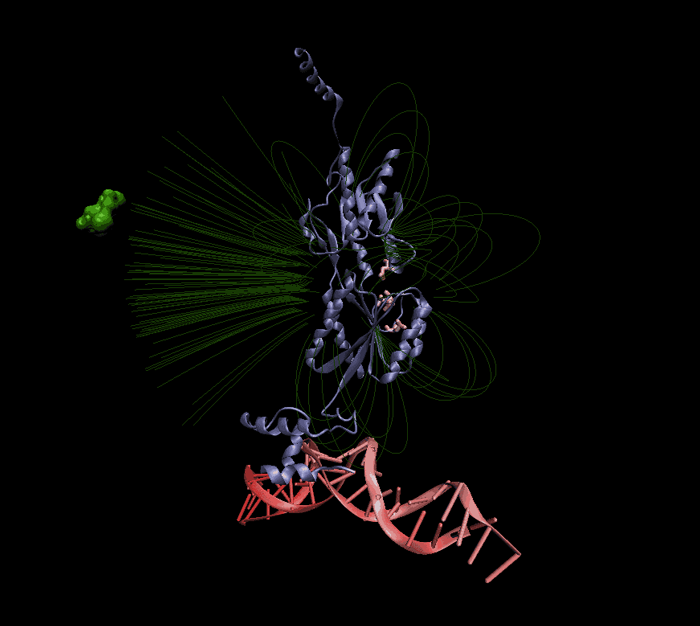 Then, to identify the variants with the most specific responses to the four target molecules of interest, the team engineered groups of E. coli bacteria to express green fluorescent protein (GFP) when the desired molecule was detected, thereby making the bacteria fluoresce. Performing high-throughput in vivo screening of the sensor library in the engineered E. coli, the team identified the most effective variants by their high fluorescence, then filtered them out and genetically sequenced them to reveal the DNA profiles and design maps for transforming aTFs into custom-tailored sensors with high specificity.

The results are striking in that an optimized engineered aTF sensor can be identified for sensing any arbitrary molecule using this approach, opening new doors in synthetic biology by putting allosteric proteins in the control of genetic engineers.

"The LacI protein we chose to re-design into a custom biosensor is only one of thousands of different allosteric transcription factors that exist in nature," said Noah Taylor, a graduate researcher at the Wyss Institute who recently finished his Ph.D. in Biological and Biomedical Sciences at HMS, and the first author on the study. "The ability to engineer LacI using nothing more than sequence and structure information suggests we could find tens, hundreds, or even thousands of other biosensors that respond to different molecules."

Biosensors built using this approach provide feedback on how much of a certain metabolite is present inside a cell. Metabolically engineered bacteria can be outfitted with these custom aTFs, enabling them to monitor their own bioproduction of a desired chemical, pharmaceutical or biofuel. This allows sophisticated designs in which the lack of sufficient product could result in the death of an individual cell, eliminating it from the culture. In this way, powerful evolutionary methods can be harnessed for metabolic engineering.

Sensitive detection of metabolites within cells also presents a new paradigm for the way scientists can interrogate single cells. Until now, it has been very challenging to study the metabolic state of a single individual cell. But designer biosensors could be utilized as custom responders to metabolites of interest, giving insight into the metabolic states of live cells in close to real time.

"We are now utilizing the method to find biosensors for a variety of high-value targets, particularly those that can aid in protecting the environment," said Alexander Garruss, co-author on the study, who is a graduate researcher at the Wyss Institute and a Ph.D. candidate in Bioinformatics and Integrative Genomics at HMS.

"The team's ability to engineer custom biosensors for virtually any molecule is another triumph showing the power of synthetic biology, and its ability to generate valuable new tools to advance medicine and protect our environment," said Wyss Institute Founding Director Donald Ingber, M.D., who is also the Judah Folkman Professor of Vascular Biology at Harvard Medical School and the Vascular Biology Program at Boston Children's Hospital and Professor of Bioengineering at the Harvard John A. Paulson School of Engineering and Applied Sciences.