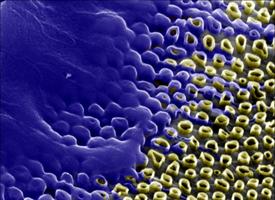 The technique, which involves culturing and transfecting cells with genetic material on an array of carbon nanotubes, appears to overcome the limitations of other gene editing technologies.

The device is the product of a collaboration between researchers at the University of Rochester Medical Center (URMC) and the Rochester Institute of Technology (RIT).

“This platform holds the potential to make the gene transfer process more robust and decrease toxic effects, while increasing amount and diversity of genetic cargo we can deliver into cells,” said Ian Dickerson, Ph.D., an associate professor in the Department of Neuroscience at the URMC and co-author of the paper.

“This represents a very simple, inexpensive, and efficient process that is well-tolerated by cells and can successfully deliver DNA into tens of thousands of cells simultaneously,” said Michael Schrlau, Ph.D., an assistant professor in the Kate Gleason College of Engineering at RIT and co-author of the paper.

However, all of these methods tend to suffer from two fundamental problems.  First, these processes can be highly toxic, leaving scientists with too few healthy cells to work with.  And second, these methods are restricted in the amount of genetic information – or “payload” – they can deliver into the cells, limiting their application.  These techniques can also be time consuming and expensive.

The new device described in the study was fabricated in the Schrlau Nano-Bio Interface Laboratory at RIT by Masoud Golshadi, first author of the paper.  Using a process called chemical vapor deposition, the researchers created a structure akin to a honeycomb consisting of millions of densely packed carbo nanotubes with openings on both sides of a thin disk shaped membrane.

The device was employed in the Dickerson Lab at URMC to culture a series of different human and animal cells.  After 48 hours, the cells were bathed in a medium that contained liquid DNA.  The carbon nanotubes acted as conduits drawing the genetic material into the cells.  Using this method, the researchers observed that 98 percent of the cells survived and 85 percent were successfully transfected with the new genetic material.

The mechanism of DNA transfer is still under investigation, but the researchers suspect it may be via a process called enhanced endocytosis, a method by which cells transfer bundles of proteins back and forth through the cell membrane.

The device has also shown the ability to successfully culture a wide range of cell types, including cells that are typically difficult to grow and keep alive, such as immune cells, stem cells, and neurons.

The researchers are now optimizing the technology in hopes that the device – which is inexpensive to produce – can be made available to researchers and, ultimately, used to develop new treatments for a range of diseases.