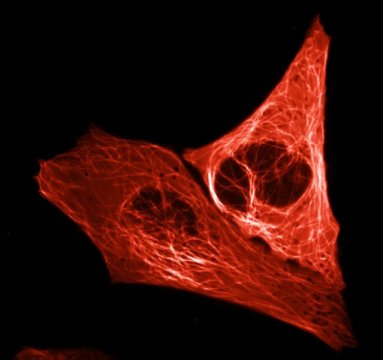 After years of trying, biologists have succeeded in creating an extremely bright red fluorescent protein in the lab. This is good news for researchers, including cancer and stem cell researchers, who use fluorescent proteins to track essential cellular processes. The researchers at the University of Amsterdam, the Institut de Biologie Structurale and the European Synchrotron in Grenoble describe their approach in the latest edition of the journal Nature Methods.

Biologists often employ a trick to understand how a (human) cell divides, secretes a hormone or transmits a signal to another cell. They attach small coloured lights to their proteins of interest in order to trace their movements and interactions in living cells under the microscope. The more colours of lights they use, the more processes they can track simultaneously.

Scientists used a fluorescent protein as a colour code in a cell for the first time in the 1990s. That protein was green and originated from a fluorescent jellyfish. By tinkering with that green protein, scientists were able to develop blue, turquoise and yellow variants in the years that followed. In the 2000s a red fluorescent protein was discovered in corals. However, nobody succeeded in developing a versatile and bright-red light in the cell – until now.

Professor of Molecular Cytology Dorus Gadella and doctoral researchers Daphne Bindels and Lindsay Haarbosch have succeeded in creating a spectacularly bright-red fluorescent protein. They have dubbed the protein mScarlet and expect it to be used by research groups across the world, for example to gain a better understanding of how disruption of cellular processes causes uncontrolled cell division found in cancer cells. Gadella: ‘Just as other people study the stars and prepare future trips to Mars, we are exploring the universe of the proteins that regulate the cellular processes within our bodies.’

The research group created mScarlet by comparing the genetic blueprints of a range of red fluorescent proteins from corals. They searched for sequences that consistently occurred in the various genetic codes since these apparently are indispensable. The group assembled these essential pieces of code and then had a company synthesise a complete DNA strand. They introduced that synthetic DNA into a bacterium, which converted it into a protein.

They assessed the brightness of each protein produced in this way under a microscope and then tinkered some more with the DNA code, observing how modifications affected the brightness. The entire process was a kind of lab-based evolutionary experiment which resulted in Gadella and his colleagues creating mScarlet, the protein with the highest brightness.

That brightness will serve cellular microscopy well as it ensures the visibility of the proteins studied by scientists. Moreover, mScarlet is an ideal illuminating agent as it does not affect the functioning of the proteins to which it is tagged.

Story from the University of Amsterdam. Please note: The content above may have been edited to ensure it is in keeping with Technology Networks’ style and length guidelines.