Researchers at the University of Reading, funded by the Insect Pollinators Initiative, say that while most crops are pollinated by only a small number of bee varieties, conservation efforts should be aimed at a wider number of species – even those that currently contribute little to crop pollination – in order to maintain biodiversity and ensure future food security.

Improving bee diversity in Britain would provide farmers and consumers with an insurance policy against future ecological shocks, such as climate change, the scientists say.

Professor Simon Potts, director of the Centre for Agri-Environmental Research (CAER) at the University of Reading, said: “The few bee species that currently pollinate our crops are unlikely to be the same types we will need in the future. 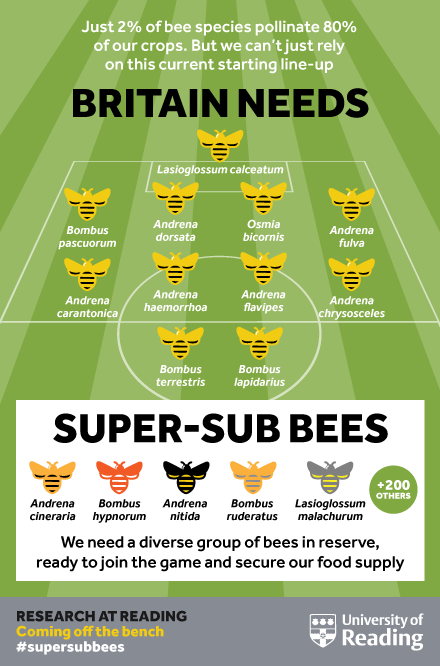 “It is critical to protect a wide range of bees and other insects now so that, as Britain’s climate, environment and crop varieties change, we can call on the pollinating species which are best suited to the task.

“We can’t just rely on our current starting line-up of pollinators. We need a large and diverse group of species on the substitutes’ bench, ready to join the game as soon as they are needed, if we are to ensure food production remains stable.”

The call comes as new research, published today in the journalNature Communications, shows that some of the most endangered insect pollinators are considered virtually valueless by simple economic measures of the natural environment, which only consider present-day agricultural and environmental needs.

The international study, by scientists including a team from the University of Reading, showed that while the pollinating work of wild bees was worth more than $3,000 (around £1,900) per hectare, most of this work was done by a handful of common species, such as some types of bumblebees and solitary bees.

Most other species contribute very little in the way of clear economic benefits. In fact, only 2% of potential bee species constituted 80% of crop flower visitors observed in the study. This small number of bee varieties are vital for the production of UK crops such as oilseed rape, beans, apples and strawberries. Their work would cost more than £1Bn a year to replace in the UK alone.

Professor Potts, one of the report’s authors, said: “Human history is full of examples of food crises caused by an over-reliance on a single crop or a dwindling number of species.

“In the insect world, we have already seen how the massive decline in honeybees in Britain has led to a reliance on wild bees to do much of the pollination. At one time, honeybees were enough to pollinate most of Britain’s crops. Now, there are only enough to pollinate around a quarter of them. If we didn’t have other species of bees to turn to, we would already be facing a food security catastrophe.”

Honeybee colonies have slumped in the UK from 250,000 in the 1950s to fewer than 100,000 today. Many British apple crops, for example, which previously relied on honeybees, are now almost exclusively pollinated by a handful of wild bee species.

“Putting a cash value on ecosystem services is helpful to highlight to politicians and farmers just how important nature is to the bottom line,” said Professor Potts. “But thinking purely about today’s profits is pointless if it comes at the expense of the future sustainability of our countryside and our food supply.

Advance Your Work in Molecular Diagnostics