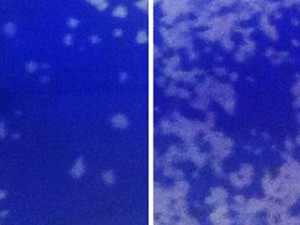 These miRNAs are small stretches of RNA made by host cells to regulate gene expression. If a virus can co-opt one, it can manipulate its host without having to make its own protein. This strategy saves valuable space in the viral genome and allows the virus to better hide from the host’s immune system.

DNA viruses are known to utilize miRNAs of the cells they infect; they even produce their own. Last year, Rockefeller scientists were surprised to discover that hepatitis C, a virus that contains RNA rather than DNA, not only sequesters a host miRNA but relies upon it. Now the same team—which includes researchers in the labs of Charles M. Rice, Maurice R. and Corinne P. Greenberg Professor and head of the Laboratory of Virology and Infectious Disease, and Robert B. Darnell, the Robert and Harriet Heilbrunn Professor and head of the Laboratory of Molecular Neuro-oncology—has found evidence that another RNA virus, the bovine viral diarrhea virus, which infects cows and other livestock, also depends on miRNAs for infection.

To see if RNA viruses other than HCV use host miRNAs, the researchers developed a screening method that chemically attaches those miRNAs to their targets.  “The problem with bioinformatic searches for miRNA targets is that they are small enough to occur every few thousand bases in the transcriptome,” says Troels Scheel, the first author of the study, now at the University of Copenhagen. “Moreover, computational approaches typically don’t know what’s expressed in different cell types,” and therefore which mRNA sequences they identify as miRNA targets might be physiologically relevant.

In contrast, a biochemical scan developed in the Darnell and Rice labs—called CLEAR-CLIP—identifies real miRNA target sequences by physically linking the miRNA to some of its target mRNA, without the need for any a priori sequence information.

“Is HCV an outlier? Is its dependence on miRNA unique?” wondered Joseph Luna, a postdoc in the Rice lab. To find out, he and his colleagues used CLEAR-CLIP to analyze the interactions of 15 RNA viruses with their host miRNAs. Among them were several viruses known to cause human disease, including poliovirus, dengue, and chikungunya virus. Their analysis showed that bovine viral diarrhea virus, or BVDV, a pestivirus that poses major trouble in the meat and dairy industries, specifically bound to both miR-17 and another host miRNA called let-7.

BVDV relies on miR-17, and also sponges it up

Usually, miRNAs function by repressing the expression of genes or their translation into protein. But in this case, miR-17 stabilizes the BVDV genome, just as miR-122 does for HCV. Upon infecting its host, the virus takes control of it by altering the expression of its genes. And since BVDV sops up so much of the host cell’s miR-17, it prevents this miRNA from repressing the host genes normally under its control.

The scientists found they could weaken the replication and production of the virus by inhibiting its interaction with the miRNA. They say miR-17 might provide an effective target for the development of new drugs to control BVDV.

In the report, the researchers speculate that dependence on host miRNAs might be a general phenomenon in pestivirus replication, although they are not yet sure what biological purpose it could serve. But regardless of its function, this interaction between pestiviruses and miRNA may provide a ripe target for antiviral therapies since viral replication depends upon it.