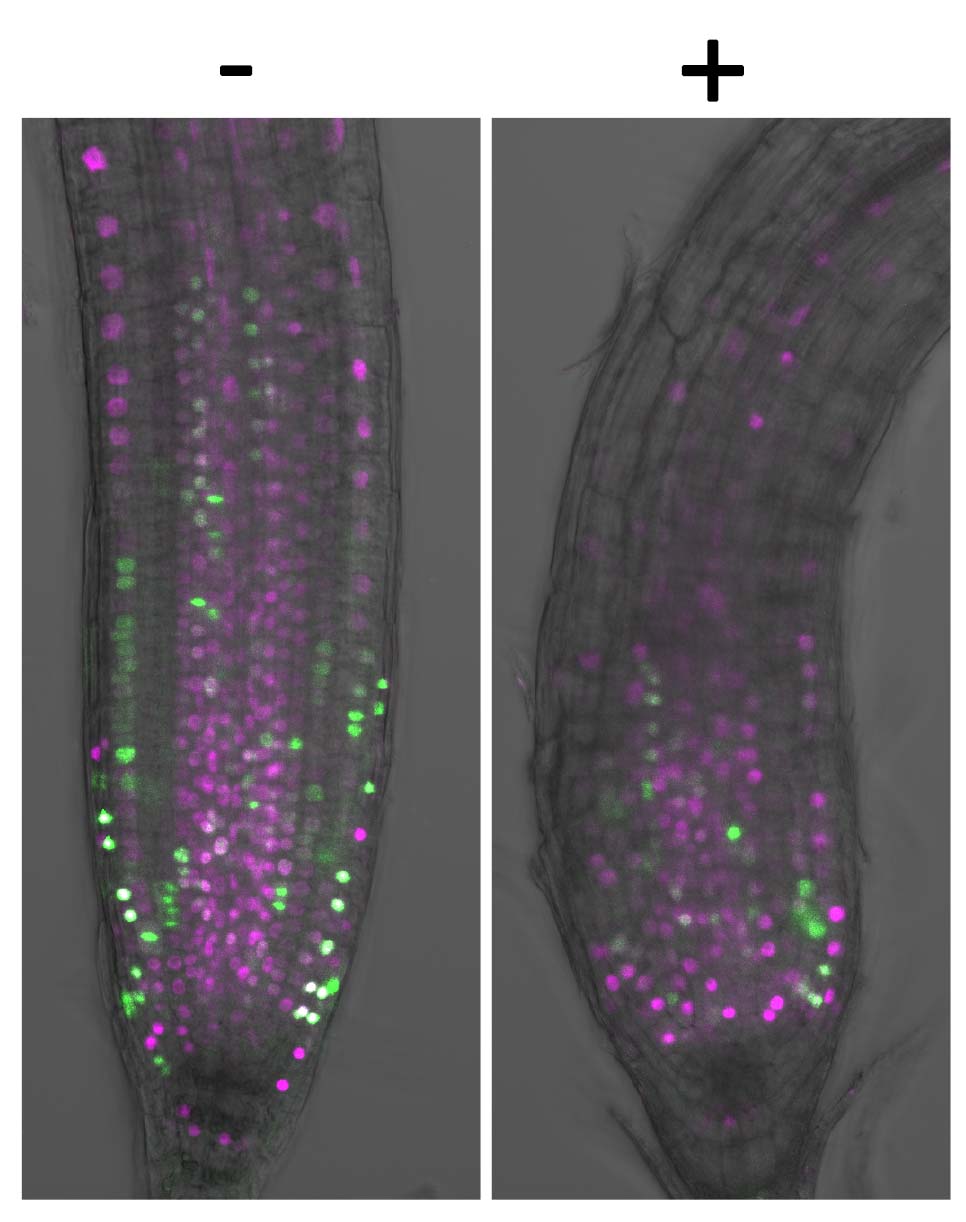 Dr. Minako Ueda, Dr. Masakazu Nambo of the Institute of Transformative Bio-Molecules (ITbM) of Nagoya University and their colleagues have reported in the journal Plant and Cell Physiology, on the development of a series of triarylmethane compounds, which were tested on plant cells to see their effect on cell division. Through live cell imaging, they were able to identify a new triarylmethane compound that can rapidly inhibit cell division in plant cells.

"As part of ITbM's interdisciplinary research initiative, we decided to search for new compounds that can inhibit the cell division in plants without causing damage to them," says Minako Ueda, a plant biologist and a leader of this study. "Being in the Mix Lab (special labs that have researchers from different disciplines mixed together) at ITbM, I was able to talk to an organic chemist, Masakazu Nambo, who suggested the use of triarylmethane compounds for cell division inhibition in plant cells," she continues.

"We had reported a new catalytic reaction in December 2013, to rapidly synthesize triarylmethanes in 3 steps from readily available starting materials, using a palladium catalyst," says Masakazu Nambo, an organic chemist and another leader of this study. "Triarylmethanes have not really been used before on plants, but we were able to visualize their effect on Tobacco plant cells using live cell imaging. We started this research about 3 years ago, but we were fortunate to be able to identify a triarylmethane compound that can rapidly inhibit cell division in plants," he continues.

Triarylmethanes are a group of compounds that derive from methane (a molecule consisting of carbon with 4 hydrogen atoms attached to it) and consist of a carbon atom center with 3 aryl (aromatic ring) groups and a hydrogen atom. This structure can be found in organic materials, such as dyes and fluorescent probes, as well as in natural products. Some compounds containing the triarylmethane moiety are known to exhibit anticancer properties, and many new compounds have been synthesized to investigate their bioactivities.

"Our palladium-catalyzed sequential arylation reaction has been highly useful to rapidly synthesize a variety of triarylmethanes to be used for testing their effect on the cell division in plants," says Nambo.

"We used a Tobacco plant cell attached with a fluorescent probe to visualize the cell division process," says Ueda. "We added the triarylmethane compounds to the cultivated cells and investigated whether cell division had occurred or not by realtime live cell imaging."

"As a result of screening about 200 compounds, we found that (3-furyl)diphenylmethane (chem7), which is a triarylmethane that contains 2 phenyl groups and a furyl (a 5-membered aromatic ring containing 4 carbons and an oxygen atom in the ring) group, had strong inhibitory activity on plant cell division," says Ueda.

When the furyl moiety was replaced with other aromatic groups, or when one of the benzene rings was removed, the cell division inhibitory activity was not observed, suggesting that a triarylmethane structure containing both the benzene and the furan rings are necessary for their bioactivity.

"Although I did not have any issues about working with compounds directly synthesized by chemists, I was initially surprised to receive compounds that were not necessarily soluble in the solvents that I was using in my biological experiments," says Ueda. "It was exciting to test new compounds and I was astonished by the speed that the compounds were being synthesized. The speed of compounds being generated was faster than the speed that we could test them on the cells."

The group also tested whether chem7 could inhibit cell division in other plants, or in other developing tissues. By applying chem7 to the young seeds and roots of a model plant, Arabidopsis thaliana, the group found that rapid inhibition of cell division was observed in both tissues.

Cell division consists of several phases, including the M phase where the cells actually divide (M = mitosis), the S phase where the DNA is copied and prepares for division (S = synthesis) and the G1/G2 phase in between (G = gap). These phases (cell cycle) are repeated leading to cell division. In order to figure out which phase that chem7 actually acts upon, Ueda and her team used two fluorescent proteins of different colors to visualize the process of the cell cycles in the root of Arabidopsis thaliana. (Green indicates the M phase and red indicates the S and G2 phases.)

"As the roots of Arabidopsis thaliana contain cells at various phases, it was possible to observe different phases, shown in green and red," explains Ueda. "Upon addition of chem7 to the roots, we found that both colors existed but the area that contains fluoresced cells (tissues with high cell division activity) became smaller."

This indicates that chem7 does not target a specific plant cell phase, but exhibits cell inhibitory activity regardless of the phase. The group concluded that chem7 causes no severe damage to the shapes of cells and tissues by being able to rapidly stop the cell activity at any cell phase.

In addition, when chem7 was washed away from the roots and cultivated cells treated with chem7, cell division was observed again, indicating that the effect of chem7 is not lethal.

"Through the collaboration with chemists and biologists, we were fortunate to discover a new compound that can selectively inhibit the cell division of plant cells regardless of the cell phase," says Ueda and Nambo. "chem7 rapidly stops cell division and plant growth without causing drastic damage to the shapes or functions of the cells."

"It was nice to be able to come together and discuss research with people from different research fields. We are currently carrying out further studies to generate new compounds that can rapidly and reversibly control plant growth without causing harm to humans and bacteria in the surrounding environment, which can potentially work as agrochemicals," they speak.

Story from the Institute of Transformative Bio-Molecules (WPI-ITbM), Nagoya University. Please note: The content above may have been edited to ensure it is in keeping with Technology Networks’ style and length guidelines.