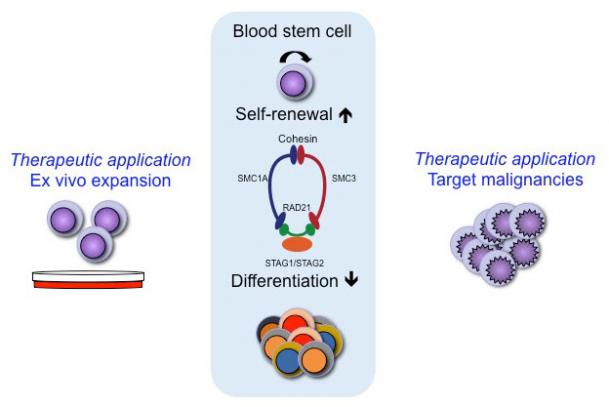 An important element in getting blood stem cells to multiply outside the body is to understand which of the approximately 20 000 genes in the human body control their growth. A research team at Lund University in Sweden has studied close to 15 000 of these genes alongside each other. The researchers have succeeded in identifying four key genes which, together, govern the growth and multiplication of the stem cells.

Every day, over 100 billion new mature blood cells are generated in an adult human. This major production places high demands on the blood stem cells which must be capable both of maturing into specialised blood cells and of self-renewing and multiplying. In a bone marrow transplant (also referred to as a stem cell transplant), the blood stem cells are responsible for the formation of a new blood system. In order to make stem cell transplants safer and available to more patients with diseases such as leukemia or hereditary blood disorders, researchers in many parts of the world are studying how to expand – multiply – blood stem cells. Yet many of the fundamental mechanisms of the process are still unknown.

“Clarifying what regulates the balance between multiplication and maturation of blood stem cells could provide the right keys to expanding them outside the body. In addition, it would enable the identification of new points of attack for the treatment of blood cancer, which is precisely a disruption of the balance between multiplication and maturation”, explains Roman Galeev, a doctoral student at the Stem Cell Centre at Lund University’s Department of Laboratory Medicine, and first author of the study.

“The research is unique as the study of so many genes alongside one another is unprecendented. In addition, we have used human blood stem cells, which is difficult in itself as it is requires the gathering of a large amount of material”, says Jonas Larsson, Associate Professor at the Department of Laboratory Medicine who supervised the study.

Of the 15 000 genes that were tested, the research team found around 20 candidates with a strong capacity to affect the balance of growth in the blood stem cells. What was striking was that four of these 20 genes were physically connected through cooperation in a protein complex.

“The discovery showed that this protein complex is crucial and has an overarching function in the growth of the blood stem cells”, says Jonas Larsson.

The protein complex, consisting of the four genes plus one further gene, is called cohesin and forms a sort of brace which holds different parts of the DNA strand together in the cell. The researchers believe that this allows the cohesin complex to control access to the “on/off switches” in the DNA, and to change the impulses the blood stem cells receive from various genes, thereby affecting cell division. The blood stem cell either multiplies or matures to become a specialised cell with other tasks.

Independently of the Lund researchers’ discovery, other research in the field of blood cancer has recently identified mutations in the exact same four genes in patients with various forms of blood cancer:

“This is incredibly exciting! Together with the results from our study, this indicates that the cohesin genes are directly and crucially significant in the development of blood cancer. Our findings entail a new understanding of how the expansion of blood stem cells is controlled. Eventually, this can lead to new ways of affecting the process, either to prevent the development of cancer or to expand the stem cells for transplant”, concludes Roman Galeev.