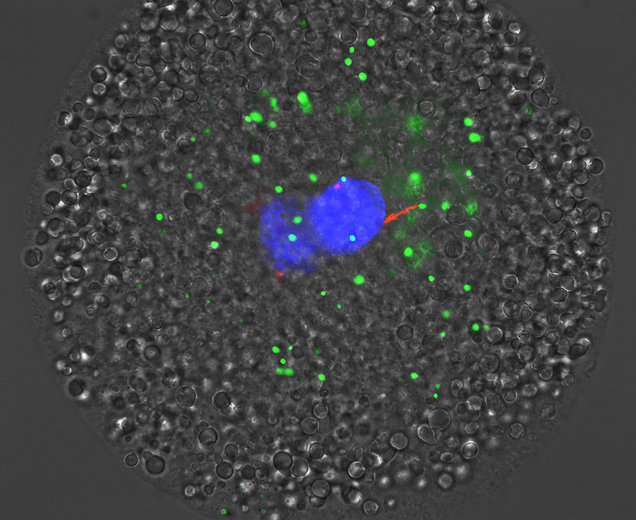 A new study published in the Proceedings of the National Academy of Sciences (PNAS) from the University of Missouri has succeeded in creating embryos with “heteroplasmy,” or the presence of both maternal and paternal mitochondrial DNA. This new innovation will allow scientists to study treatments for mitochondrial diseases in humans as well as the significance of mitochondrial inheritance for livestock.

When parents pass along their genes to their children, most of the DNA from the mother and father is evenly divided. However, children only receive one type of DNA, called mitochondrial DNA, from their mothers, while the fathers’ mitochondrial DNA is naturally removed from the embryos. Peter Sutovsky, a professor of reproductive physiology at Mizzou and lead author Won-Hee Song, a doctoral candidate in the Mizzou College of Agriculture, Food and Natural Resources, have found a way to prevent this paternal mitochondrial DNA removal process in pig embryos, thus creating embryos with “heteroplasmy.”

“As many as 4,000 children are born in the U.S. every year with some form of mitochondrial disease, which can include poor growth, loss of muscle coordination, learning disabilities and heart disease,” Sutovsky said. “Some scientists believe some of these diseases may be caused by heteroplasmy, or cells possessing both maternal and paternal mitochondrial DNA. We have succeeded in creating this condition of heteroplasmy within pig embryos, which will allow scientists to further study whether paternal heteroplasmy could cause mitochondrial diseases in humans.”

For their study, Sutovsky and Song identified two separate ubiquitin-binding proteins, called SQSTM1 and valosin-containing proteins (VCP), within embryos they believed were responsible for removing paternal, sperm-contributed mitochondria and their genetic cargo.

Sutovsky, Song and their colleagues experimented by inhibiting SQSTM1 and VCP separately, but found that even when one protein was incapacitated, the other protein still carried out the duty of disposing of the paternal mitochondria inside the fertilized egg. However, when Song and Sutovsky inhibited both proteins simultaneously, the paternal mitochondria were not removed and remained within the embryos.

“This research is important because we now know for sure what processes lead to the deletion of paternal mitochondrial DNA from embryos,” Sutovsky said. “This knowledge will enable us to further explore how some children may develop devastating mitochondrial diseases. From there, we can create treatments and therapies that may help prevent or reduce the effects of heteroplasmy and other mitochondrial disorders.”

The study, “Autophagy and ubiquitin-proteasome system contribute to sperm mitophagy after mammalian fertilization,” was funded by the National Institute of Food and Agriculture within the U.S. Department of Agriculture. Additional funding was provided by the National Institutes of Health Office of Research Infrastructure Programs, and by the Food for the 21st Century program at the University of Missouri. Stuart Meyers, a professor in the UC-Davis School of Veterinary Medicine, was a co-author on this study.