Insecticides play a central role in efforts to counter global impacts of mosquito-spread malaria and other diseases, which cause an estimated 750,000 deaths each year. These insect-specific chemicals, which cost more than $100 million to develop and bring to market, also are critical to controlling insect-driven crop damage that poses a challenge to food security.

But in recent decades many insects have genetically adapted to become less sensitive to the potency of insecticides. In Africa, where long-lasting insecticide-treated bed nets and indoor spraying are major weapons in the fight against malaria, many species of mosquitoes across the continent have developed insecticide resistance that reduces the efficacy of these key interventions. In certain areas climate change is expected to exacerbate these problems.

University of California San Diego biologists have now developed a method that reverses insecticide resistance using CRISPR/Cas9 technology. As described in Nature Communications, researchers Bhagyashree Kaduskar, Raja Kushwah and Professor Ethan Bier with the Tata Institute for Genetics and Society (TIGS) and their colleagues used the genetic editing tool to replace an insecticide-resistant gene in fruit flies with the normal insecticide-susceptible form, an achievement that could significantly reduce the amount of insecticides used.

“This technology also could be used to increase the proportion of a naturally occurring genetic variant in mosquitoes that renders them refractory to transmission or malarial parasites,” said Bier, a professor of Cell and Developmental Biology in UC San Diego’s Division of Biological Sciences and senior author of the paper.

The researchers used a modified type of gene-drive, a technology that uses CRISPR/Cas9 to cut genomes at targeted sites, to spread specific genes throughout a population. As one parent transmits genetic elements to their offspring, the Cas9 protein cuts the chromosome from the other parent at the corresponding site and the genetic information is copied into that location so that all offspring inherit the genetic trait. The new gene-drive includes an add-on that Bier and his colleagues previously engineered to bias the inheritance of simple genetic variants (also known as alleles) by also at the same time cutting an undesired genetic variant (e.g., insecticide resistant) and replacing it with the preferred variant (e.g., insecticide susceptible).

In the new study, the researchers employed this “allelic drive” strategy to restore genetic susceptibility to insecticides, similar to insects in the wild prior to their having developed resistance. They focused on an insect protein known as the voltage-gated sodium channel (VGSC) which is a target for a widely used class of insecticides. Resistance to these insecticides, often called the knockdown resistance, or “kdr,” results from mutations in the vgsc gene that no longer permit the insecticide to bind to its VGSC protein target. The authors replaced a resistant kdr mutation with its normal natural counterpart that is susceptible to insecticides.

Starting with a population consisting of 83% kdr (resistant) alleles and 17% normal alleles (insecticide susceptible), the allelic drive system inverted that proportion to 13% resistant and 87% wild-type in 10 generations. Bier also notes that adaptions conferring insecticide resistance come with an evolutionary cost, making those insects less fit in a Darwinian sense. Thus pairing the gene drive with the selective advantage of the more fit wild-type genetic variant results in a highly efficient and cooperative system, he says.

Similar allelic drive systems could be developed in other insects, including mosquitoes. This proof-of-principle adds a new method to pest- and vector-control toolboxes since it could be used in combination with other strategies to improve insecticide-based or parasite-reducing measures to drive down the spread of malaria.

“Through these allelic replacement strategies, it should be possible to achieve the same degree of pest control with far less application of insecticides,” said Bier. “It also should be possible to design self-eliminating versions of allelic drives that are programmed to act only transiently in a population to increase the relative frequency of a desired allele and then disappear. Such locally acting allelic drives could be reapplied as necessary to increase the abundance of a naturally occurring preferred trait with the ultimate endpoint being no GMO left in the environment.” 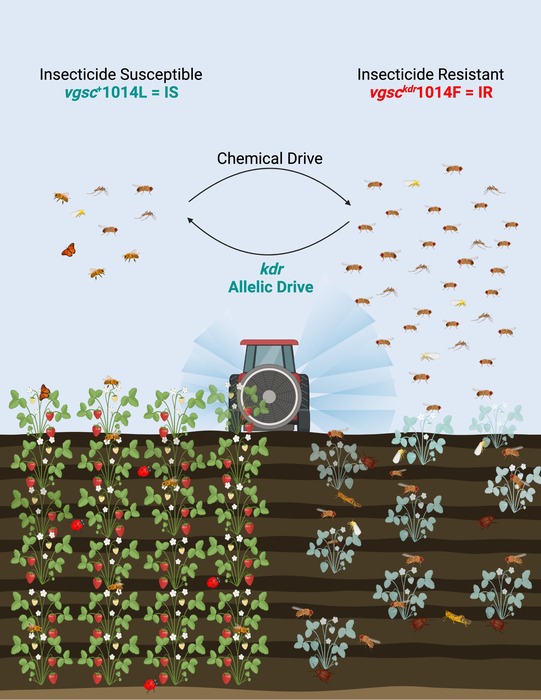 Reversing insecticide resistance with a new type of gene-drive system: Treatment of fields with insecticides leads to the emergence of insecticide-resistant insect pests and reduced diversity of beneficial insects. A new proof-of-principle study published in Nature Communications shows that gene drives engineered to bias inheritance called allelic-drives can be applied in the absence of pesticide treatment to restore insecticide susceptibility and balanced natural levels of insect populations. Credit: Bier Lab, UC San Diego.

“An exciting possibility is to use allelic drives to introduce novel versions of the VGSC that are even more sensitive to insecticides than wild-type VGSCs,” suggested Craig Montell (UC Santa Barbara), a co-author on this study. “This could potentially allow even lower levels of insecticides to be introduced into the environment to control pests and disease vectors.”