Published: May 24, 2022
| Original story from the University of Maryland College of Agriculture and Natural Resources
News

Published: May 24, 2022
| Original story from the University of Maryland College of Agriculture and Natural Resources
Read time:

Ten years ago, a new technology called CRISPR-CAS9, made it possible for scientists to change the genetic code of living organisms. As revolutionary as it was, the tool had its limitations. Like the first cell phones that could only perform one function, the original CRISPR method can perform one function: removing or replacing genes in a genetic sequence.

Later iterations of CRISPR were developed for another function that allowed scientists to change gene expression by turning them on or off, without removing them from the genome. But each of these functions could only be performed independently in plants.

Now, scientists from the University of Maryland College of Agriculture and Natural Resources, have developed CRISPR-Combo, a method to edit multiple genes in plants while simultaneously changing the expression of other genes. This new tool will enable genetic engineering combinations that work together to boost functionality and improve breeding of new crops.

“The possibilities are really limitless in terms of the traits that can be combined,” said Yiping Qi, an associate professor in the Department of Plant Science and Landscape Architecture and co-author of the study. “But what is really exciting is that CRISPR-Combo introduces a level of sophistication to genetic engineering in plants that we haven’t had before.”

The new research appears in the May, 2022 issue of the journal Nature Plants.

The benefits of manipulating more than one gene at a time can far outweigh the benefits of any one manipulation on its own. For example, imagine a blight raging through wheat fields, threatening farmer livelihoods and food security. If scientists could remove a gene from the wheat that makes it susceptible to the blight and simultaneously turn on genes that shorten the plant’s life cycle and increase seed production, they could rapidly produce blight-resistant wheat before the disease had the chance to do too much damage.

That’s the type of engineering Qi and his team demonstrated in four different phases of experimentation.

Step One: proving the concept

Qi and his team had previously developed new CRISPR methods to regulate gene expression in plants, and to edit multiple genes at the same time. But to develop CRISPR-Combo, they had to establish that they could perform both of those genetic engineering functions in parallel without negative consequences. In this new paper, they demonstrated that using tomato and rice cells.

“As a proof of concept, we showed that we could knock out gene A and upregulate, or activate, gene B successfully, without accidentally crossing over and knocking out gene B or upregulating Gene A,” Qi said.

Then Qi and his colleagues tested CRISPR-Combo on a flowering plant called rockcress (Arabidopsis), which is often used by researchers as a model for staple crops like corn and wheat. The researchers edited a gene that makes the plant more resistant to herbicides while activating a gene that causes early flowering, which produces seeds more quickly. The result was an herbicide-resistant rockcress plant that yielded eight generations in one year rather than the ordinary four.

For their third experiment, the team demonstrated how CRISPR-Combo could improve efficiency in plant breeding using tissue cultures from poplar trees. Breeding programs to develop new varieties of plants generally use tissue cultures rather than seeds—consider how a plant can regrow roots and leaves from a single stalk planted in the soil. Scientists genetically modify stem cells from plant tissue that have the ability to grow into full plants, and when those plants mature and produce seeds, the seeds will carry on the genetic modifications.

Some plants are better at regenerating from tissue cultures than others, which makes this step the single largest bottleneck in genetic engineering of crops. For some plants the success rate is just 1%.

Qi and his team addressed the bottleneck by first editing a few traits in poplar cells, then activating three genes that promote plant tissue regeneration.

“We showed in poplars that our new method could offer a solution to the tissue regeneration bottleneck, dramatically increasing the efficiency of genetic engineering,” Qi said.

Currently, growing genetically engineered plants from tissue cultures requires the addition of growth hormones, which activate growth promoting genes. The research team shortcut this process in rice by directly activating these genes with CRISPR-Combo. The result was gene-edited rice from tissue cultures that did not require hormone supplementation. Qi and his colleagues found that tissue cultures grown with their method expressed more of the edited gene than tissue grown using hormones. 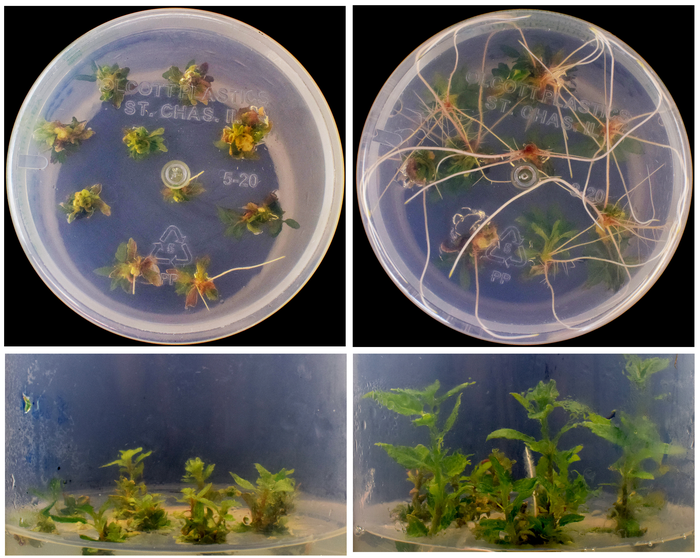 On the left: poplar sprouts containing CRSPR-edited gene. On the right, poplar sprouts with the same CRSPR edit plus gene enhancements to improve growth. Credit: UMD.

Now that the team has demonstrated their CRISPR-Combo method works in a variety of plants for multiple purposes, they intend to conduct experiments in citrus, carrots and potatoes to test its viability in a fruit, vegetable and staple crop. They are also working to create an herbicide resistant golden rice with enhanced nutritional content and red rice with increased antioxidants.